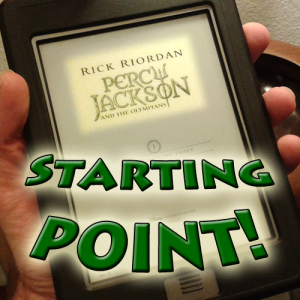 Are you excited? I’M excited! Also, I’m caffeinated. That’s probably something, too.

So I’m all set to plunge into the first novel of Rick Riordan’s Percy Jackson series, The Lightning Thief. (Here’s my intro blog post if you missed that one.) This will be the first time I’ve ever blogged my experience of reading a book, so I don’t know quite how quickly it will go, but I guess we’ll explore this together.

I know very little about this series, but it seems fitting for me to tell you just how much I think I do know. This shouldn’t take long. Like I said, I avoided exposure to the series while finishing up Zeus Is Dead, but I did once take a glance at The Lightning Thief’s Wikipedia entry to see if Riordan’s idea differed any from my own. So here’s what I know–or think I know:

Lightning thief? Why do I immediately suspect Hermes is involved?

And that’s about it, really. If I’m wrong about any of these, just snicker quietly to yourself. I’ll find out the truth in the book soon enough.

My plan with this is to do a blog post for each chapter that I read, but I’m weird and unpredictable so it’s possible I might occasionally lump two chapters together or spend a post talking entirely about cheese, because reasons. There will also soon be a link on the right in the blog that will take you to all of the “Michael Reads…” entries, as soon as I’ve built up a few.