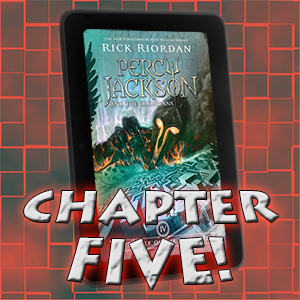 Step right up, folks, we’ve got two–that’s right, TWO!–visions for the price of one! (Well, it’ll cost you a nice fountain, but don’t worry about that now.) Plus dead things, demons, and Daedalus deals! All just $19.95 on the 5th chapter of Michael Reads Percy Jackson: The Battle of the Labyrinth, which you might better know as…

This chapter went pretty quick, so this will be a short entry. I was putting various theories and questions in my notes to talk about, but they were actually all addressed before the chapter ended. Who exactly are Kronos and Luke bargaining with? Daedalus! (Probably. Makes sense, though.) It sounds like there’s a betrayer on the Camp Halfblood side! Yes, Chiron is suspicious about that, too.

And I confess I’m starting to question my good feeling about Quintus, but I’m still holding out that he’s a red herring intended to distract us readers from what might really be going on—not that I know what really IS going on, however.

Oh! This was not addressed:

“Camp Half-Blood is sending a quest, as you predicted. Our side of the bargain is almost complete.”
Excellent. The voice of Kronos didn’t so much speak as pierce my mind like a dagger. It was freezing with cruelty. Once we have the means to navigate, I will lead the vanguard through myself.

So does this mean that Daedalus (or whoever they’re bargaining with) required others be sent into the Labyrinth in order for him to give Luke/Kronos the secret of its navigation? Or is it like the Fleece quest, where Luke is using Percy et al. to find the object of their quest for him, and then steal it after they’ve done the hard work? At first I was leaning toward the former, but upon reflection…I dunno. 50-50 shot either way.

Come to think of it, there’s one more thing that I considered but didn’t get addressed in the chapter: Theseus recognized the voice of the ghost with Nico, so I’m thinking that—maybe—that ghost is Minos. Though is it possible that it could be Daedalus’s ghost? Or—and this just occurred to me as I type this—Icarus?

Now into the Labyrinth with ye, plucky and claustrophobic heroes! *boot* 😀