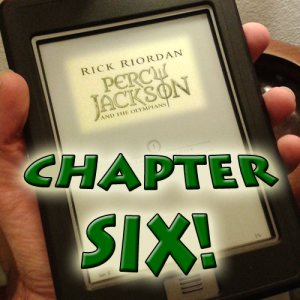 I used to be supreme lord of the bathroom like Percy, but then I took an arrow in the knee.

Something weird is in the attic, and there’s sewage water everywhere! So naturally that means it’s time for the sixth chapter of Michael Reads Percy Jackson: The Lightning Thief…

I Become Supreme Lord of the Bathroom

I liked this chapter. It had a lot of exposition, but it’s exposition that previous chapters have given me an appetite for, so it works. Percy gets a tour of the camp, learns that all the kids (including him) have a divine parent, and then unwittingly empties a bathroom’s worth of toilet water on some of Ares’s kids. Percy’s starting to show a bit more awe at this point, too, which is nice to see.

Being a mythology buff, I also enjoyed picking out which cabin belonged to which gods. Percy’s guess confirmed my own that cabins 1 and 2 belonged to Zeus and Hera. Let’s see what I can do with the others: 9, with the smokestacks, is Hephaestus’s, 4, with the tomato vines and grass, would be Demeter’s, and I figure 7, made of gold gleaming in the sunlight, is Apollo’s.

Oh, and if the seashell-and-coral festooned cabin 3 isn’t Poseidon’s, I’ll eat my foot.

“No one ever stays in” cabins 1 and 2. Apparently Zeus and Hera don’t have children? Except this is Zeus we’re talking about, here! Perhaps his children just aren’t allowed in the camp for some reason? Or he sends them somewhere else? Though Poseidon’s cabin is empty, too. Hmm. There’s something more at work here, isn’t there?

My favorite line/phrase from this chapter is a bit of Percy’s dialogue:

“Look, is there anything we can say without it thundering?”

That does seem to happen quite a bit, doesn’t it?

I’m fighting a cold, so I’m not sure when I’ll get the next chapter posted (reading isn’t a problem but thinking of coherent things to say in a post is), but soon, one hopes!