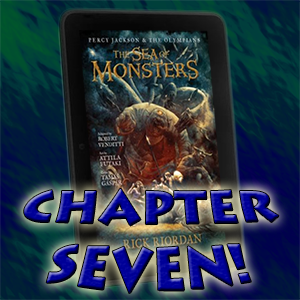 Another fine chapter you’ve gotten us into, Riordan!

Percy cleans with fire, Hermes dashes in, and Tantalus becomes an even bigger prat—all this and more on the seventh part of Michael Reads Percy Jackson: The Sea of Monsters…

I Accept Gifts from a Stranger

Though lacking in much actual action, this chapter shoves us onto the flight deck, fuels up the jet, and clears us for launch. (Aren’t metaphors fun?) Midway through I found myself a little down on things, but then I realized I was resisting some of Riordan’s Greek mythology updates only because they contradicted with my own in Zeus Is Dead.

So I had to whap myself upside the head as a reminder that not only does creative diversity make the genre MORE enjoyable, but I’d have been even more bummed out if I’d discovered that my take and Riordan’s take on everything were identical.

We writer types are a weird mix of arrogance and sensitive egos. Also pizza. 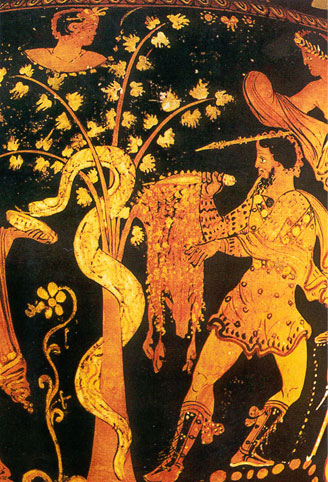 So! Onward. We finally hear from Annabeth what the item is that she thinks Grover has found: The Golden Fleece! Yay, famous mythological item! And it smells like satyr-god, which actually makes good sense, too.

I’m not sure how I feel about the Sea of Monsters actually moving, though. The monsters themselves, fine, but the actual sea? Hmm. But this is one of those spots where I had to whap myself with a reminder that I’m not the author. I’ll go with it. Riordan’s earned some trust, after all. Good call on making it the Bermuda Triangle, though. Riordan and I both felt the need to mention the Triangle in our writing–though in Zeus Is Dead it’s only a throwaway mention in the narrative’s explanation of naturally-occurring “nodes of power”:

Such nodes had their own special ways of luring things of value, one way or another. It was no accident, for example, that a little patch of Nevada desert had turned into one of the top destinations for vacationers to turn over their money. Ships and planes that vanished in the Bermuda Triangle were the unfortunate example of what happened when similar phenomena were buried beneath large quantities of water…

But back to The Sea of Monsters! When Annabeth said that the Fleece might be a trap, it took me by surprise. I hadn’t considered that. So I thought about it, and I’m going to go out on a limb and argue with the daughter of the goddess of wisdom: I don’t think it’s a trap. Satyrs have been looking for Pan for a long, long time, right? That’s a heck of a long con just for a trap. I’ll qualify that by saying that whoever set the trap may have figured that if poisoning the tree didn’t wipe out the camp on its own, the fact that the Fleece, if anyone DID find it, would be well-guarded makes for nice fail-safe.

Percy and Annabeth’s plan for forcing Tantalus to grant them a quest was a pretty good one. I’d expected it to work, right up until Tantalus started pulling out the deliberately non-specific terms with regard to declaring that he’d authorize “a champion.” At that point I saw it coming that he’d choose Clarisse. Note that I do not consider seeing this coming as a bad thing. When a reader can anticipate (and sometimes even dread) how a character will react, that means the characters feel more real. Riordan has done a great job in establishing that Tantalus is–to borrow from Ghostbusters–a class-five, free-roaming jerk-ass.

Would that make this little guy the anti-Tantalus? No? I’m bending over backwards to make this picture relevant? Hrmph.

This chapter gives us another mythological milestone: Hermes makes his first appearance! This of course means that I get to have fun contrasting Riordan’s modern-Hermes with my own. While I’m partial to my own take, I do like Riordan’s version, too. As the pantheon’s most mischievous member, I grinned to see him encouraging Percy to screw the rules and go questing anyway. It’s a perfect role for him to play.

Some differences between Riordan-Hermes and ZID-Hermes: R-H is busier. The caduceus-phone has him almost as distracted in this scene as ZID-Apollo. While R-H invented the Internet, ZID-H is a tad irked at Al Gore for doing that before he could. (Note: I know Al Gore did not invent the Internet. Did I mention ZID is a comedy?) 😉 And, of course, ZID-H has an English accent and gets involved in some things that– Well, spoilers.

My favorite line/quote/exchange/whatever thing I pick because I like it for this chapter is the following exchange between Annabeth and Percy:

“Europa fell off and died along the way, but that’s not important.”

“It was probably important to her.”

There’s no deep reason, here. It made me laugh. I nearly picked the two quotes I used in the caption of the Fleece image above, but then a few lines later I ran into this one and it took the top spot.

So that’s it for the seventh chapter. Am I taking that bit about the Sea of Monsters moving too literally? Did Annabeth mean to say that the monsters just migrated out of the Mediterranean, or did an entire geographical area actually migrate? I’m going with it either way, but I’m still curious.

Tell me your interpretation in the comments!
(But of course, no spoilers…)