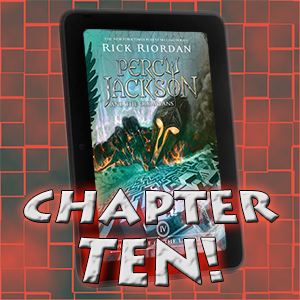 Dead people, visions, and Sphinx, oh my! And I’m now aware of Riordan’s views on standardized testing. All this and more in Michael Reads Percy Jackson: The Battle of the Labyrinth, Chapter 10…

We Play the Game Show of Death

This chapter moves from speaking with the dead, to more visions, to a quick little adventure in the Labyrinth. I’ll touch on all of those separately in a moment, but first, it’s a little depressing to know that Grover is now officially out of time. I feel bad for the guy; it’s not easy to chase a dream and fail (even if that failure may only be temporary). I do hope he finds Pan eventually–in fact I think he will–but I get the sense that’s not going to be happening in this particular book. But hey, I’ve been wrong before. Like, at least once.

Bianca finally appears to one of Nico’s summons, and her message to him is for him to stop trying to raise her from the dead. I found this section a little puzzling…

“Why didn’t you answer me sooner?” he cried. “I’ve been trying for months!”
“I was hoping you would give up.”

She just wasn’t talking to him because she hoped he’d stop trying to? Her own brother? That seems…suspicious? Incongruent? She cared enough to send Percy visions but not enough to speak to Nico directly to tell him to stop? Even once? This doesn’t make sense to me. Bianca was never a coward. She chose to sacrifice herself. She shouldn’t be afraid of talking to Nico.

As you can see, I’m having trouble buying this explanation. I really hope there’s something more behind this beyond just providing the reader with some mysterious visions.

I don’t have much to say about Percy’s vision of Luke, aside from the fact that I’m curious about what Luke’s scheduled role is going to be later. But I don’t have any guesses on that. After Percy is kicked out of the vision of Luke, however, we get a flash of Daedalus’s past.

The vision would seem to suggest that Daedalus’s losing Icarus has turned him into a bitter, jealous, ass-hat of a man who’d kill his own nephew for daring to look up to him. Totally a dick move, Daedalus. That assumes this vision is true, of course. (But given that it’s a story from actual myth, we can safely assume it is.)But who sent Percy that vision? Perhaps Kelli sent it as part of bringing despair to Luke’s enemies. Or did Minos send it, to back up his own words? Or Athena, as a warning? Or is it just part of the standard demigod dream package?

I hadn’t read or thought about the story of Daedalus and Perdix in a long while. I’d forgotten about it, actually, so the shock at reading it was something of a new experience to me. You’re a lousy uncle, Daedalus.

Okay, so I don’t have too much to say about this little set-piece. The encounter with the Sphinx at end of the chapter comes a bit out of nowhere, and I’m guessing it’s just meant to give a bit of action to an otherwise calmer chapter. I also get the sense Riordan’s kids had some standardized testing to deal with and he wanted to take a quick satirical stand on it. It’s cute, and made me chuckle. Percy & co. solve that problem with some good ol’ fashioned violence, and then it’s off after the spider to Hephaestus, assuming they can catch up to it.

The quest of Annabeth is running out of time, and Camp Halfblood’s days seem to be numbered…