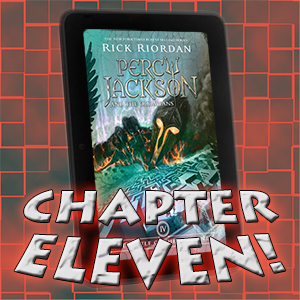 Don’t try this chapter title at home, kids! (Do it at school. Then your parents can sue!)

We talk with Hephaestus, and then it’s side-quest time! Get ready for the eleventh chapter in Michael Reads Percy Jackson: The Battle of the Labyrinth…

I Set Myself on Fire

I’ve got a lot of little thoughts going all over the place in this chapter, so I’ll just be running them down in list form, eschewing any greater sense of structure. (It’s the last week of 2015, I’m overstuffed on fudge and Christmas cookies, and that’s just all the ability I’ve got in me.) But first, a quick rundown of the chapter:

A meeting with Hephaestus leads Annabeth and the gang (it’s her quest, even if Percy’s name is on the cover of the book, so I’m giving her top billing here) to a bit of new information on Daedalus and the promise of a way to reach him–if they just perform a teensy little side quest involving finding out who’s using Hephaestus’s forge in Mt. St. Helens when he’s not looking. It turns out to be an appropriated weapons factory for a bunch of Kronos-allied demons called Telekhines, and they’re not too pleased about being found out. Meanwhile, Grover and Tyson split off from the group after getting a new, fresh whiff of Pan-scent.

It’s been a while (again) since I ended with a favorite line from the chapter, so why not go back to that? (Don’t answer that. This is my blog, after all.)

“Most monsters will vaporize when sliced with a celestial bronze sword. This change is perfectly normal, and will happen to you right now if you don’t BACK OFF!”

Actually, I think in hindsight I rather liked the line from the video above more than this one, but I specifically jotted this one down in my notes when I was reading, so it must have particularly tickled me at the time.

Thanks for reading! On to Chapter 12 very soon, where I’ll find out just how Percy survives being launched sky-high from a jet of superheated steam. Or maybe he doesn’t survive and he wakes up dead in Hades? That’d be an interesting way to go with the series, no?