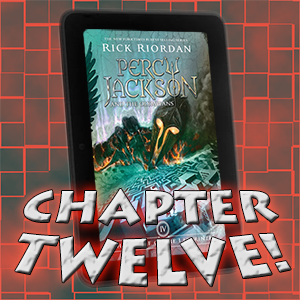 Look out. Michael’s getting on his soapbox…

Percy has a bye-week, and Michael gets annoyed. Curious? Then it’s time for the 12th chapter in Michael Reads Percy Jackson: The Battle of the Labyrinth, known to most as…

I Take a Permanent Vacation

Percy wakes on the island of Ogygia, home to Atlas’s daughter Calypso, of Odyssey fame. Here Calypso tends his wounds in a timeless land until they fall in love, his strength returns, and he has to leave. I want to warn you, I’m going to be negative in this one, because there’s one central element of this chapter that I really dislike. But first, let’s make a happier pit stop on this moment:

“…So what I’m saying— I think you know how to navigate the maze.”
It finally sank in. Why hadn’t I seen it before? Hera had been right. The answer was there all the time.

I really need to start reading these books faster. (It’s my own fault.) At this point I’ve got no guess at what Hephaestus could mean. Not a one! Percy obviously does, so I get the sense it ought to be something I could guess at, if I could only remember. But I can’t remember, so I’ll just have to wait and see. And you’re all probably laughing at me now. 🙂

So, my complaint: Calypso isn’t a character. She isn’t a woman. She’s a plot device. Percy needs to heal up quickly after getting blasted out of a volcano, Riordan picked Calypso and her island to do it—a perfectly legit choice, and in keeping with mythology—but wedges in this failed love story to pad out the chapter.

Now don’t get me wrong: a tale of doomed lovers is perfectly fine to have. My problem is the story is almost literally just unpacked from the mythology-box, displayed, and put back. While we do get to see Calypso from Percy’s perspective—she’s incredibly, naturally beautiful and life-giving—the narrative devotes no time developing why she falls for Percy, and so it just feels forced, like the ending of a bad action movie where the woman suddenly falls for the hero because the script needs a big kiss to close out on.

As I sailed into the lake I realized the Fates really were cruel. They sent Calypso someone she couldn’t help but love.

Why couldn’t she help but fall in love with him? We’re given nothing to show us why, other than she’s desperate for company. Is that the only reason she’s falling for him? Or because she believes she’s cursed to always fall in love with someone who washes up on the island? Self-fulfilling prophecies are a thing, after all. But there was literally no time spent in showing any real reason for her feelings, other than she’s supposed to.

I suppose some of you may think I’m getting too worked up about this, but this is my honest reaction. It’s a lousy way to use Calypso (and, really, a lousy way to use a character in general). The only reason for her being here is to get Percy out of a jam. It’s like Riordan felt there needed to be more of a story arc in this chapter beyond Percy just being healed, and so went with this, mirroring The Odyssey. Yet without any real support or development, it’s just a hollow, clumsy parody.

Okay, I’ll get off my soapbox for the moment. I’ll close with something else, on a more positive note: I had to laugh at this line by Percy upon first meeting Calypso:

“You’re not… you’re not an evil sorceress, are you?”

What immediately went through my mind at that point was a quote from Farscape’s John Crichton in “Beware of Dog” after Aeryn asks the Vorc, “Are you the parasite?”

That reminds me, I really need to get back to my Farscape rewatch blogging. But first, must finish more of Percy Jackson!
Poor, short-changed Calypso.