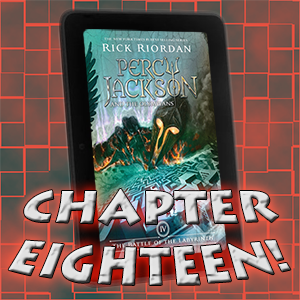 I’ve finally had time amid my writing schedule to do a little reading, and the battle of the Labyrinth finally takes place. All this and more on this 18th installment of Michael Reads Percy Jackson: The Battle of the Labyrinth, which eschews the obvious book title callback in favor of a chapter title of…

So now, still heavy with the truth about Pan, Rachel leads everyone out of the Labyrinth, and I discover that my first guess about Rachel’s dad after reading chapter 16 was actually on track after all. I shouldn’t have doubted myself. But the land developer twist? That I didn’t see coming. I’m now picturing Rachel’s dad as Ken Behring, the California land developer and one-time owner of the Seattle Seahawks who very nearly moved the team to California in 1996. This guy.
And now I’m probably dating myself a bit here, so that’s all I’ll say about that.

And then Rachel’s off, and Percy, Annabeth, Tyson, Grover, and a reluctant Nico fly back to camp. As I suspected, the Satyr Council—or at least, Silenus—goes into full denial mode when told of Pan’s death. Note that I’m not claiming any points for my anticipating that. It’s not only a perfectly understandable reaction, it just makes sense. I mean, can you blame them? You’ve got an entire culture built around looking for something for two millennia, and then some upstart shows up and says, “Yep, it’s gone. Can’t be found anymore,” without any proof to give. There’s going to be some doubt there, and that totally makes sense. I don’t envy Grover the fight he’s going to have on his hands about it, though.

I mean, assuming they all survive the attack. I’m writing this entry as I read, and at this point, given all of the monsters and half-bloods that Kronos has got coming up the pipe AND the fact that the gods have forbidden themselves from interfering, I really don’t see how Chiron expects them to survive this.

…I should keep reading, huh?

Battle sequences can be challenging to write (and I speak as someone who’s written a whole one of them!). You have to find a way to balance the chaos with showing the tide of the overall struggle, and the various beats and details within it. Too much chaos and it’s just a mess. Too much overall play-by-play and you become clinical to where the reader loses the emotional connection. Riordan pulls this one off with flying colors, so far as I’m concerned.

I am, of course, still waiting to find out just why the heck Grover sent everyone scampering back into the Labyrinth by yelling at them, but I’m okay with waiting for the next chapter to have that explained. One last bit of Pan, maybe? In any case, I liked this chapter. Plus, hey: Briares sacked up! Excellent. 🙂

So Daedalus gives up his life force to finally let himself die, taking the Labyrinth with him, and potentially crushing all of the nasty monsters and half-bloods that fled back into it. I’m on board with this, and anxious to see how the final two chapters of the book play out. But first, in honor of Daedalus finally owning up to things…

“Will you take my soul for ransom, then?” Daedalus asked. “You could use it to reclaim your sister.”
“No,” Nico said. “I will help you release your spirit. But Bianca has passed. She must stay where she is.”

…I don’t think I ever really owned up to the fact that I was utterly and completely wrong about Bianca not really being dead. This seems to be a good of a place to do that as any.

I thought I could predict books just as well as Yoda. I was wrong.

Here’s hoping I like the explanation for Grover’s shout—assuming it’s coming in the next chapter?
I hope?