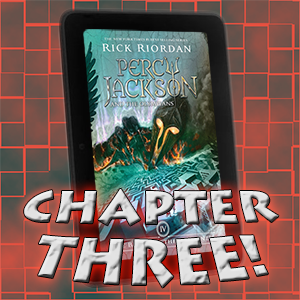 Percy’s sharper, but so are the scorpions. Also I get excited for an old-fashioned D&D-style adventure! (Don’t you judge me.) All this and more in the 3rd part of Michael Reads Percy Jackson: The Battle of the Labyrinth, or as Rick Riordan called it…

We Play Tag with Scorpions

I liked this chapter a lot! It’s my favorite in the book so far, except for one tiny little nitpick, which I’ll get to later. First, I liked that Percy’s doing better at asking questions when they ought to be asked. He immediately asked what was up with Clarissa’s search and the insane guy who went into the Labyrinth. I also made this note as I was reading, when I noticed Percy showing some increased perspicacity and experience after all he’s gone through at this point:

I’m glad Riordan had Percy guess that the Labyrinth was now in North America. It’s good to see that Percy’s getting a feel for that sort of thing.

And it would strain credulity if he didn’t! (I like using terms like “strain credulity.” Makes me feel like a big…writer…guy.) But right after I made that little note, I went on and read this:

Annabeth rolled her eyes. “Under a building? Please, Percy. The Labyrinth is huge. It wouldn’t fit under a single city, much less a single building.”

Oops. But Percy still gets credit from me, dammit! And geez, Annabeth, you didn’t have to roll your eyes at the kid. Harsh.

But anyway, I really love the whole idea of the Labyrinth: using it as a means to move armies, and searching for the Ariadne’s string. I’m good with this. Let’s go! I’m also getting some very D&D vibes from everything here, and I mean that as a compliment. It’s scratching an old itch. Of course, that probably means I’m in danger of building up my expectations to the point where I might be disappointed if the book doesn’t turn out exactly how I imagined, so I’ll need to watch out for that.

“It’s been growing for thousands of years, lacing its way under Western cities, connecting everything together underground. You can get anywhere through the Labyrinth.”

I mean doesn’t that just remind you of the Underdark? (D&D reference, folks. Keep up.)

Granted, Grover using the Labyrinth to find Pan seems like a bit of a long shot. But the fact that it might be used that way made me think that Luke might be trying to use it to find something else he needs in that same way. Or at least it did until Percy and Annabeth found a Labyrinth entrance right in the came. So much for that guess. …Unless I’m being faked out? Geez, I’m a suspicious bastard, ain’t I?) I’m still good with this whole Labyrinth idea, though.

As for my nitpick, I didn’t like that Percy and Annabeth just happen to stumble into the Labyrinth entrance. Juniper seemed to be about to tell them about it right before the scorpions attacked. If she actually had told them rather than it being found by happenstance, that would’ve felt better. Or better yet: If Percy had stumbled on it in a previous book and then realized what it was after Annabeth told him about it in this book. But laying down foreshadowing like that across an entire series isn’t an easy feat. In a perfect world, it’d be ideal, but you can’t always anticipate everything when writing a series, so I can’t fault Riordan for that one.

I don’t blame Percy and Annabeth for running away from the scorpions. After all, even the legendary Perseus couldn’t handle THREE giant scorpions without help.
See you next time for Chapter Four!