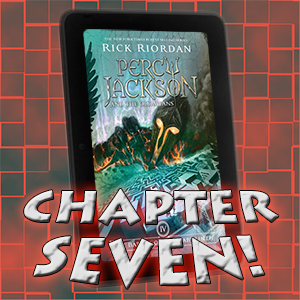 “Welcome to The Rock!” -Sean Connery

It’s a jailbreak! On Alcatraz! I’m going to try to resist making reference to one of my favorite action movies (the 1996 Nicholas Cage/Sean Connery action-fest known as The Rock) in this entry. (Though frankly, I won’t be trying very hard.) So let’s get continue Michael Reads Percy Jackson: The Battle of the Labyrinth with the seventh chapter…

So, dang, that Labyrinth IS a fantastic rapid-transit system if they can cross the country to San Francisco that quickly! (Nifty.) The Labyrinth would revolutionize the express package delivery industry if Fed-Ex or UPS got hold of it. I mean, ya know, except for the insanity and monsters. But come on, who hasn’t had a package delivered that was so mangled we suspected monstrous involvement?

I wasn’t sure at first if they really had gone to Alcatraz, however. I figured there might be a small chance it was just a mythological recreation, or that Alcatraz itself was based on the design of this place. But nope, real Alcatraz, which I’m cool with. I guess they use the Mist to hide it from all the tourists? That’s a lot of Mist…

Or maybe there’s no Mist and the tourists are just too distracted by the green flares and fighter jets to notice the imprisoned monsters.

So I think Kampê—and her physical description—is probably my favorite part of this chapter. She’s possibly the most monstrous thing we’ve come across yet in Riordan’s world (let me know if you disagree in the comments), and the description lingers to give us the full picture:

It was sort of like a centaur, with a woman’s body from the waist up. But instead of a horse’s lower body, it had the body of a dragon— at least twenty feet long, black and scaly with enormous claws and a barbed tail. Her legs looked like they were tangled in vines, but then I realized they were sprouting snakes, hundreds of vipers darting around, constantly looking for something to bite. The woman’s hair was also made of snakes, like Medusa’s. Weirdest of all, around her waist, where the woman part met the dragon part, her skin bubbled and morphed, occasionally producing the heads of animals— a vicious wolf, a bear, a lion, as if she were wearing a belt of ever-changing creatures. I got the feeling I was looking at something half formed, a monster so old it was from the beginning of time, before shapes had been fully defined.

I think it’s the bubbling skin that gets me most. Plus I’m just a sucker for really, really ancient creatures.

Well, sometimes. Because so far, I do not like Briares. Sure, yes, he’s been captured by someone who imprisoned him for thousands of years, but she had him in a cell he could easily escape if he wanted to. Then Tyson’s risking his life to save him and he’s still whimpering. Perhaps that makes me callous, but my first impression of this guy is to just be annoyed with him. But hey, that helps me relate more to Percy, so that’s a good thing at least!

“Tyson is risking his life to help you!” I yelled at him. “You will make it.”

Even being on Percy’s side, however, “Rock-Paper-Scissors-Gun” bugs me. But then, if Briares can cheat by throwing 99 extra hands (seriously, dude, you only get to throw ONE!), I guess Percy can cheat by doing the gun thing. Hey, if paper can beat rock, shouldn’t paper be able to beat gun, too?

I’m bummed that Percy lost his shield. Stop letting Tyson’s gift get damaged! The guy’s not made of shields! All in all, through, not a bad chapter. I’ll give it a thumbs-up…

You know, I really thought I’d be able to work in more references to The Rock than this…