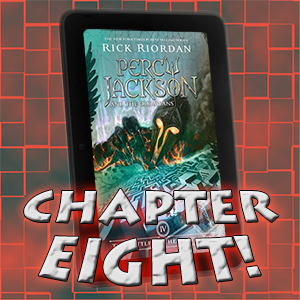 Well howdy, pardners! Y’all saddle up here and let’s go see us some rootin’-tootin’– Okay, you know what? I can’t pull that off. So instead of going all cowboy on y’all, I’m just going to say that it’s time for Chapter 8 in Michael Reads Percy Jackson: The Battle of the Labyrinth…

We Visit the Demon Dude Ranch

So this is a fun chapter! I think a great deal of that enjoyment comes from just getting a tour of Geryon’s ranch. Riordan captures the imagination well with his descriptions here, and I also enjoyed the behind-the-scenes concept of where such creatures come from. Plus Geryon and Eurytion are just interesting characters.

Well, slight exception: I really quite liked the ranch, until they got to the flesh-eating horses. Truthfully it wasn’t the flesh-eating that bugged me, but the way the horses were wandering around in a field completely covered in their own feces. I shared everyone’s outrage, thinking of real animals that truly do get treated like that. It twisted my stomach and made things a little unpleasant. Then again, it also made for an excellent illustration of Geryon’s character.

Granted, if flesh-eating horses really do like standing around in poop, then I guess it’s not so bad, but somehow I’m not rushing to just accept Geryon’s word on this. 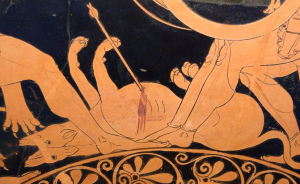 Another thing I liked? Orthrus! I recognized Cerberus’s two-headed brother immediately and cheered, mostly because I have a soft spot for this particular pup after using him in Zeus Is Dead. At least, I used Orthrus’s shade/ghost/spirit, and combined him with Laelaps to create the “Orthlaelapsian Wraith.” Those not interested in a ZID excerpt should skip on ahead to the end of the following quote…

A brief aside for the curious: The Orthlaelapsian wraith represented one of Hades’s first triumphs in the field of shade recombinatorics. Combining the spirits of two slain mythological creatures, the wraith possessed the best traits of each with nary the trouble of free will that always made a living being so darned tricky to deal with.

Half of the beast was formed from the spirit of the two-headed hound Orthrus, brother to the three-headed Cerberus (who to this day guards the entrance to Hades and makes a monthly appearance at the meetings of the Westminster Kennel Club). A magnificently ferocious creature possessed of terrible strength, power, and the fearsome ability to simultaneously chew up a pair of new shoes and lick itself, Orthrus nonetheless fell to the blade of Hercules during one of the first cattle rustling episodes in history. 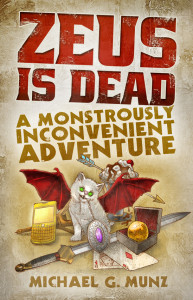 Hades created the wraith’s other half from the shade of another hound known as Laelaps. While (amazingly) possessed of only one head, Laelaps was so skilled a tracker that it was invariably bound to catch whatever it chased. Passed down to various owners from Zeus himself, Laelaps was finally set against the Teumessian fox, an animal so deviously clever that, also invariably, it could never be caught. News of the matchup ran like lightning throughout the world. Who would win in a contest between a hound that unfailingly caught its prey and a fox that would always get away? It promised to become one of the world’s greatest existential conundrums, a contest of immensely philosophical proportions up there with the Irresistible Force versus the Immovable Object—were it not for the fact that Zeus got wind of it. So greatly did the matter perplex him that he decided he wouldn’t put up with that sort of crap, turned both the fox and hound to stone, and spent the rest of the evening taking the form of a pole at an early Athenian strip club.

Laelaps, of course, died instantly, his shade consigned to the underworld, where Hades wove it together with that of Orthrus to create the Orthlaelapsian wraith. Empowered with the bloodthirsty strength of Orthrus and the unfailing tracking of Laelaps—wrapped together in a delicious wraith-like shell that was invisible when standing still—it would guard whatever the god wished. None could surprise the two-headed wraith. If by some miracle a thief did manage to make off with what it was guarding, it could track the thief to the ends of the earth to recover what was stolen…

Now back to TBotL with a few other random observations:

So Percy makes a bargain that he’ll clean the poop-stables by sunset to get Nico away safe, or Geryon gets all of them. Ballsy move, Percy. I assume he’s got a fast way in mind TO clean the stables, but then again, he only suggested a deal, not the stable-cleaning, and Percy’s not always one to look before he leaps. On the other hand, perhaps he paid attention to Hercules’s Twelve Labors and he’s planning to divert a river through the place?

I guess we’ll see. Or at least I’ll see. Those of you reading along likely already know…