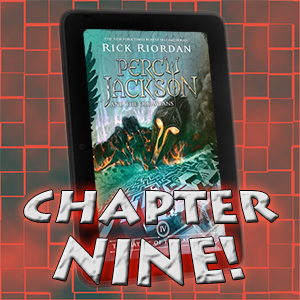 Poop! Poop everywhere! Now if that doesn’t get your attention, I don’t know what will. (Seriously, I don’t. I’m really bad at marketing.) But hey, there will be poop, and more, in Chapter 9 of Michael Reads Percy Jackson: The Battle of the Labyrinth, a.k.a…

See? Says it all right there in the chapter title. Okay, so there’s fortunately more to it than that, and this post will be another stream-of-consciousness post as I read it. All set? Good, because here I go rejoining Percy to see how he does wagering his friends lives without asking…

So you know, sometimes I can be a little dense. I’d entirely forgotten that Percy could talk to horses. This will undoubtedly give him an advantage in the poop-cleaning thing.

Yes! The horse agreed enthusiastically. Poseidon can come in, too! We will eat you both! Seafood!

Um…or not, I guess. But Percy did remember that Hercules used a river! And this is another area where Poseidon-powers will help him. This will go just fine, surely. Right?

When I got to the river, I found a girl waiting for me. She was wearing jeans and a green T-shirt and her long brown hair was braided with river grass. She had a stern look on her face. Her arms were crossed. “Oh no you don’t,” she said. “I’m not to going have my river used again to clean that filthy stable.”

I seriously hadn’t read that passage before I made my last statement. Though I did kind of suspect it wouldn’t be quite so easy. And this is the same naiad that was there when Hercules did it? Dang, naiads live a long damn time.

The naiad, by the way, reminds Percy of Rachel Elizabeth Dare, and as the book invokes her name I suddenly realize that I’d actually forgotten about her. My question now is, is Rachel being invoked to refresh the reader of her existence in preparation for another return somehow? Is she just being used to describe the naiad a bit more? Or—and this is a long-shot that I’m not expecting to be correct just yet—is this meant to imply that Rachel is secretly a naiad?

So Percy’s got himself a bunch of fossilized seashell sand, and a hint from the naiad. I’m not entirely sure what that means. Is he going to bring them back to life and have a nanite army of itty-bitty-cleany-bots? (That’s a technical term, folks.)

Oops—it’s not the sand, there’s just a bunch of seashells themselves. (Really, really resilient seashells.) And he only picked up one. Dangit, I wanted mollusk nanites! Let’s get some mythological gray goo going here! So what’s he going to do with just one? I am without theory.

It was seawater in the middle of a Texas ranch. I scooped up another handful of dirt and picked out the shell fossils. I didn’t really know what I was doing, but I ran around the length of the stable, throwing shells into the dung piles. Everywhere a shell hit, a saltwater spring erupted.

…I did not expect that. Huh. I have reservations, but alright, I’ll go with it. It feels more than a little far-fetched and convenient, though. Is there a mythological precedent for this that I’m forgetting? I know we’ve had warriors springing out of dragon’s teeth, but not water from seashells. It just feels too easy.

“Stop,” I told the water. Nothing happened. The pain in my gut was building. If I didn’t shut off the geysers soon, the salt water would run into the river and poison the fish and plants.

Oh, hey, a complication! Good. This task shouldn’t be this easy.

“Stop!” I concentrated all my might on shutting off the force of the sea.
Suddenly the geysers shut down.

We won’t eat you! the horses wailed. Please, lord! No more salty baths! “On one condition,” I said. “You only eat the food your handlers give you from now on. Not people. Or I’ll be back with more seashells!”

But what if the handlers feed them people? 😉 Tuesday is Soylent Green day, you know… 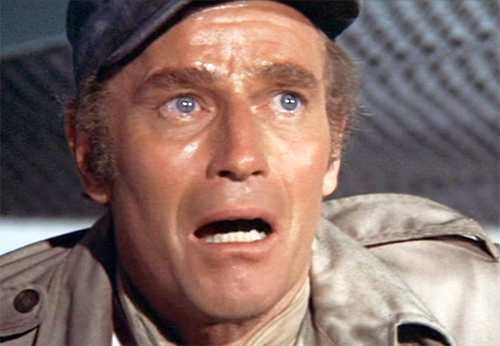 Spoiler: It’s made out of people.

But now, Geryon’s going back on his deal, so it looks like even though cleaning the stables was easy, it’s not getting Percy jack squat.

Geryon made a tsk-tsk noise. “But did you make me swear on the River Styx? No you didn’t. So it’s not binding. When you’re conducting business, sonny, you should always get a binding oath.”

I really love that river. So useful for creating interesting situations, speaking from experience. Given what happens next, I also like Eurytion. Who doesn’t like people who put entitled jerks in their place? (I suppose entitled jerks don’t, but…)

Now it’s time for a fight, which, while brief, works pretty well in the sense that there are interesting complications to overcome. I’m not archery expert, but I’ve got to think that’s one heck of a powerful bow to get through three ribcages like that. But hey, it’s found on a mythical ranch, and Percy’s got some god-blood and a prayer to the archery twins, so I’m good with this.

So Percy’s going to try to dead-call Bianca on the Nico-line. Talking with the dead in Greek mythology (or most mythology) never entirely goes as well as people hope. I’m curious to see how this works in the next chapter. I’m also curious why Bianca would communicate with Percy and not with her own brother, assuming it’s really Bianca sending the messages. Maybe Midas was jamming the signals, so to speak? …Er, no pun intended, there.

But I’m sure I’ll find that out in the next chapter. But will I ever find out what’s up with Rachel Elizabeth Dare?