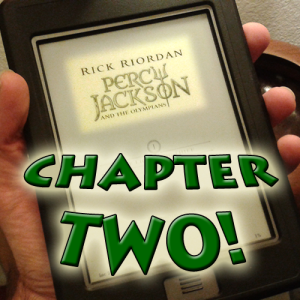 Two comes after one!

I’m a big fan of adding the suffix “of death” to pretty much anything. (Though I tend to prefer “-o-death” for a more festive bit of mortal danger…) I therefore liked this chapter right from the title. I was also pretty sure it meant we’d be seeing–or at least hearing about–the Fates (a.k.a. the Moirae). In Zeus Is Dead, the Fates were at once the most difficult and the most interesting characters for me to write, so I was eager to see how Riordan tackled them.

This chapter did a good job of increasing the tension, both from the mystery of exactly what’s going on and from the clear mortal (no pun intended) danger to Percy from forces unknown. I’m sure a reader who has no idea what “the Kindly Ones” are–and I figure most readers wouldn’t–would be intrigued at mention of that name. I was intrigued as well; it meant Mrs. Dobbs was an erinys after all rather than a harpy as I’d previously suspected. Now I’m wondering if Riordan’s world has more than the three Erinyes, or if Mrs. Dobbs was either Alecto, Megaera, or Tisiphone. If the latter, is she truly dead, or just temporarily inconvenienced? In any case, doing such a thing to creatures of vengeance like the Erinyes is a sure recipe for future pain… 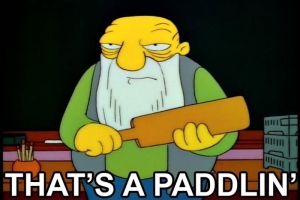 Assuming a character isn’t more than they seem?

This chapter also did a good job of smacking me in the the face with the gigantic Paddle-O-Wrongness: So Grover and Mr. Brunner ARE more than they seem. Silly Michael. I should have guessed. But this is a good thing! I like books that keep me guessing. I was pleased to see that Mr. Brunner was heavily implied to be a centaur. The thought did cross my mind when I was reading chapter one, but I forgot to actually put it on record, so you’ll just have to take my word for it.

I’ll close, again, with my favorite line from this chapter:

“I dare you to try not listening if you hear your best friend talking about you to an adult.”

It’s a good reminder of how kids can view adults as intimidating, mysterious creatures, which is something I can sometimes forget now that I’m (ostensibly) an adult myself.

What’s your favorite line from this chapter? Tell me in the comments!
Remember, sharing and commenting is encouraged, but please, no spoilers for future chapters! 🙂