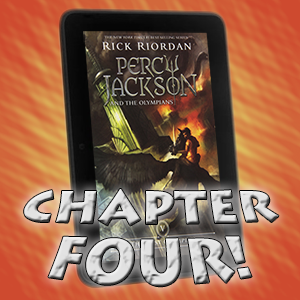 Dreams, disputes, and dealing with doom! All that and more forced alliteration on my part in the fourth chapter of Michael Reads Percy Jackson: The Last Olympian, known to the rest of you as…

We Burn a Metal Shroud

And with this fourth chapter, The Last Olympian slips into a quieter, more personal mood. While I do get an answer to the question of what captured spoils caused the rift between the Ares and Apollo cabins, the chapter’s primary focus is on Percy and his relationships with Rachel and Annabeth.

A quick aside, speaking of Rachel: After the description of Mr. Dare’s hair, the monogrammed PJs, and the fact that he’s a rich real estate developer, I’m unable to imagine him as anyone but Donald Trump. I don’t know if Riordan specifically intended to evoke Trump, but regardless of intent, that’s my head-canon going forward.

Riordan does a good job of showing Percy’s emotional situation between Rachel and Annabeth. I admit, I felt badly for Rachel and Percy both when he wasn’t able to call. Is that urge for him out of deeper feelings for Rachel, or simply not wanting her to feel abandoned (and, of course, wanting to know more about her possibly prophetic dreams)? I don’t actually know. I’m also willing to bet that Percy doesn’t actually know.

He’s clearly got feelings for Annabeth as well. When he told her about his dream—and Rachel’s visions, and wanting to contact her—I judged it (in what was perhaps something of an aloof, Vulcan-like fashion) to be the right thing to do. I was also pleasantly surprised that he did it. Kudos for growing up, Percy. Though that certainly didn’t help things with Annabeth, did it?

I’m feeling badly for Annabeth, too. Having lost Luke, she’s clearly thinking even more strongly now about losing Percy now that the prophecy looms so closely. By contrast, Percy seems to be a little numb to the idea, which I’m guessing is likely a defense mechanism. And I can hardly blame him for that.

The whole thing actually makes me think back to a theme that I’ve occasionally tried to explore at least a little bit in my more serious writing: which takes more strength, heroically sacrificing yourself to save your loved ones, or moving on through the grief after a loved one has sacrificed themselves for you?

To avoid ending on something of a downer note, I’ll leave you with my favorite line from this chapter:

I just love the idea resulting from the combination of those last three words, somehow. Badgers are generally foul-tempered enough, from what I understand. How much worse must an evil one be that is also gigantic? 😀

I’m still sticking by my prediction of Percy ending up with Annabeth…which is based on absolutely nothing else beyond wild guessing.
See you next time…