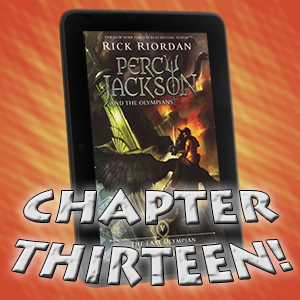 I wasn’t anticipating the Titan coming to parlay would be Prometheus, but it makes sense, given his history with humanity and generally helpful reputation. To be honest, I often forget that Prometheus IS a Titan, probably because he wasn’t involved in the whole Titanomachy/Titan War and wasn’t punished along with the others.

Also, I’ve got to hand it to him: The guy makes some pretty persuasive arguments. Just as he brought fire to early man and brought light to their darkness, here he illuminates the fact that, despite all of the struggling and monstrousness of Kronos, the Olympians are quite arguably huge jerks themselves. (Did you like that parallel to the fire-bringing thing? I’m very proud of it.) His message is pretty clear: There’s no way Percy’s forces can hold the island, no way they can keep Kronos out of Olympus, and why suffer all of the bloodshed of trying to do so when the Olympians aren’t really worth it?

Prometheus even compares the struggle to hold Manhattan with the Trojan War:

Yeah, but they held out for ten years before that happened, right? 😀 Okay, so I say that even as I find myself somewhat sympathetic to Prometheus’s argument. Then again, how do we know he’s telling the truth about having foreseen everything? I can definitely relate to Percy’s uncertainty here, and that’s good for immersion.

There’s one thing that felt off to me, though, and that’s to do with Prometheus giving Pandora’s cookie jar to Percy so that, when he decides to give up the hope of holding Olympus, he can send Prometheus that message. It seems like using Hope itself–still held within the jar–as a signal flare is a bit irresponsible, though. Hope’s important. It’s in there for all mortals, right? So if Percy releases it just to say “Yeah, surrendering,” wouldn’t that screw over all of humanity? Wouldn’t that, therefore, be a major reason for Percy not to surrender? It seems like Prometheus is sabotaging his own argument. Or am I over-thinking this?

Incidentally, there are a few different versions of the Pandora’s Box story that I’ve heard. One is that Hope was put in the box as well, as the one good thing, and that it flew out with all the bad stuff, thus letting humanity have hope in the world to help us face all the bad stuff. Another is that it was actually something that destroys hope that was in the box, and Pandora clamped it shut in time to trap that inside, thus humanity could still have hope. And then there’s this version, which says Hope remained in the box. That’s never quite made sense to me, because if all the horrible stuff was released into the world when the box was opened, how do we still have hope if it’s still trapped in the box?

As a final and random note, Grover and Anya from Buffy the Vampire Slayer would get along well over their mutual fear of bunnies.

Suppose there’s a way they can use the Ophiotaurus to get rid of the Titans instead of the Olympians?
Will Mr. Moo save us all?