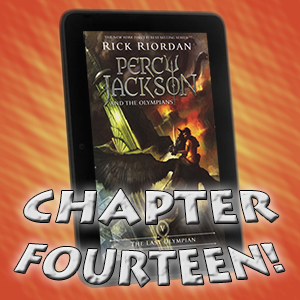 So Percy gets a triple-vision this time as he goes to rest, but before I get there, I’d like to give Thalia a kudo or three for giving some sound, needed counsel to Percy at the start of the chapter: Don’t let what Prometheus said lead Percy to being soft on Luke. Despite his situation, Luke is responsible for the bad choices he’s made. After the last chapter’s parley set a bit uncertainty in both Percy and the reader (or at least, this reader), Thalia helps him to get grounded and refocused.

And maybe there was a little pun intended on the “grounded” there with the lightning god’s daughter, I admit it. 😉

And speaking of Luke, the second of Percy’s visions seems to indicate that he’s fighting Kronos’s control. (I’m sure this won’t possibly come into play at any point in the future, heavens no…) So good on Luke there, even if I still hate him. And speaking of Kronos, he’s sharp enough to suspect that Ethan had inadvertently aimed for Percy’s weak spot because of how Annabeth jumped in the way. I’m amused that he’s right while at the same time a) Ethan can’t remember the spot and b) Annabeth didn’t know that’s what she was doing at the time. I guess Kronos doesn’t get the whole reflexive impulse to selflessly protect a loved one, huh?

And speaking of…um…loved ones! (nearly didn’t make that jump), Percy’s first vision has Tyson fighting what seems like it may be a losing battle to defend Poseidon’s palace. Here’s hoping he wins, and the peanut butter stays crunchy underwater. 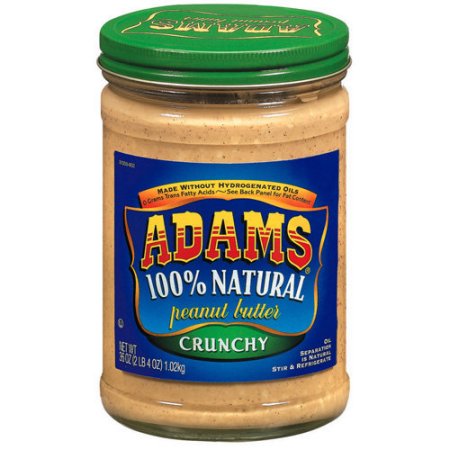 And speaking of staying crunchy: I was right! May Castellan DID try to be the Oracle! …Wait, did I ever actually express that theory on here at any point, or just think it? (Wait, what the hell does any of that have to do with staying crunchy? Just humor me, okay?) It’s nice to learn for sure the cause of her current mental state, but as I was reading, I found myself wondering just what May’s motivation to take such a risk might have been. Chiron and Hermes told her it was perilous. They said that a woman who’s had a baby had never successfully become an Oracle before. But she just kind of shrugs that all off and insists it’ll be okay. Methinks (mehopes?) there may be more to that story…

Incidentally, is May’s story supposed to be some sort of awkward Aesop from Riordan against women trying to “have it all” (kids, Oracular careers, etc.), or am I reading too much into that? Let’s go with the latter.

We heard the army before we saw it. The noise was like a cannon barrage combined with a football stadium crowd— like every Patriots fan in New England was charging us with bazookas.

In storm Hyperion’s forces, which in the middle of Central Park clash against the defense in a blaze of Greek fire, arrows, and lightning before the narrative focuses on stopping Hyperion himself, with Percy, Grover, Leneus, and the other satyrs managing to trap the Titan in a tree. Leneus gets points from me for coming back to help out, even if he did do it a little pridefully. But hey, satyr is what satyr does, right? (Yeah, I don’t know what I mean by that, either.) But before I can wonder how long before Hyperion breaks out of that tree, in swoops the Clazmonian Sow!

Wait, the what? Okay, I confess, that there’s a big-ass angry flying pig in Greek mythology is a new one on me. Cool.

Well, we’ve all had to learn that particular lesson at one time or another in our lives, haven’t we?

Okay, so I had a hard time picturing the sow as having any sort of menace, but Percy’s method of dispatching her with some of Daedalus’s statues was fun to read. And now I guess statue-Hermes and some others will be wandering New York destroying butcher shops and delis for a while.

But the battle rages on, and, as Blackjack sadly discovers, there is no time for donuts.

None for you, Blackjack! Percy is a harsh master!!!
Blackjack should go to Twin Peaks.