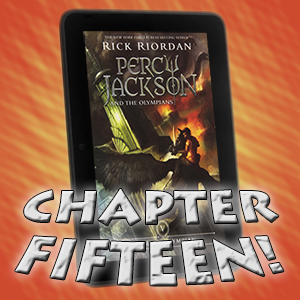 Pandemonium, ponies, and Pac-Man! That can only possibly mean that it’s time for the fifteenth chapter in Michael Reads Percy Jackson: The Last Olympian, a.k.a…

I’m going stream-of-consciousness as I read for this one folks, so strap in! Immediately we’ve got giants ripping up trees in the park, dracaenae in Rockafellar Center, and I’m suddenly wondering: just how many sleeping mortals are getting trampled, burned, folded, spindled, or mutilated in all of this? And how many New York pigeons and rats?

“Hold your lines!” Katie Gardner shouted, somewhere off to my left.
The problem was there were too few of us to hold anything.

Another thing I’ve been wondering in all of this: It seems like Kronos’s army is huge. How many campers are there at Halfblood, anyway? I never got the impression that it was a huge number, though I don’t recall specifics being mentioned either, I suppose. How many statues have joined the battle? How many satyrs and dryads are out there? How many people have died in the battle so far?

It occurs to me, as I’m asking these questions, how irritating they are for an author. Would I want to fix specific numbers to the battle if I were in his shoes? HECK no! (What if I picked something that people thought was too low? Or too high?) So maybe I should just shut up about that, huh? 😀

And hey, when is the Ares cabin gonna show up? Jerks.

Horns! Hunting horns are sounding! I don’t know who it is yet! Is it the Ares folk, arriving just after I whined about them not showing up? Is it someone else? Is Hestia sending out some troops? Has Haldir arrived from Lothlórien?

It’s the “party ponies.” I hate these guys. …On the other hand, in the middle of a dire siege defense, don’t look a gift horse in the mouth, right? Still, I shall brace for the terrible impact of their surfer jargon upon my psyche… 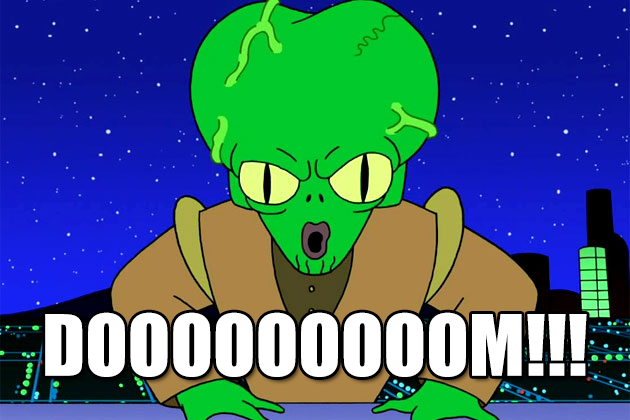 “And Typhon?” I asked.
Chiron’s face darkened. “The gods are tiring. Dionysus was incapacitated yesterday.”

Dionysus. Always goes down first, one way or another. (And yes, that’s a vague Zeus Is Dead reference, complete with double entendre.) Typhon is due to arrive in New York in a day. On the plus side, while that allows Kronos to join forces with him, that’ll also mean the rest of the gods will be around to defend Olympus. …I mean, sure, thousands and thousands of New Yorkers will probably get crushed underfoot, but from what I hear about New Yorkers, they’re tough. They’ll make it. Probably?

And hey, it’s Dionysus at a birthday party! And he plays video games just like my version. So I approve. (Because it’s all about me, right?)

Dionysus’s news that Kronos isn’t yet at his full power—and that he and the other Titans are still pretty weak—makes me happy. You know me and my issues with demigods taking out full gods and actual Titans, so it’s nice to have an in-book reason not to be bothered about this. Oh, and Dionysus also mentioned the fabric of civilization unraveling, terrible suffering, etc.

Thanks for telling Percy what the nasty surprises ARE, Dionysus. Sheesh. Gods.

Wait, Pandora’s jar follows you around and shows up in the back seats of cars belonging to your vulnerable, sleeping parents? Not fair! (You’d think that thing was cursed or something…)

Ah, hey, it’s Rachel! I’d wondered when she’d be showing up. And now her helicopter is plummeting out of the sky! And now Chiron has the nerve to call the pilot stupid for not realizing he was flying into a magical sleep field! They don’t exactly train you for that at pilot school, Chiron!

…Wait, do they? I’ve never taken a piloting lesson, so I suppose they might. Great, now I’m all uncertain and stuff.

Anyway, as Mr. D might say, here’s hoping they don’t all die terribly or something.