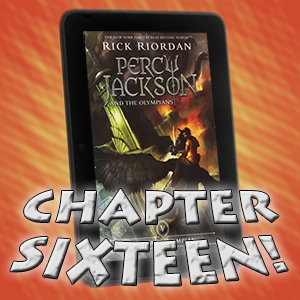 Riordan keeps killin’ people. It must be time for the sixteenth chapter of Michael Reads Percy Jackson: The Last Olympian…

We Get Help from a Thief

So this chapter started out heroic, turned foreboding, and swung back to heroic with a punch in the face from our friend Tragedy. Let’s get to it, shall we?

After Annabeth gets to be bad-ass and land a crashing helicopter with a little help from both her parents’ strengths, Rachel arrives on scene full of mini-prophecies and things she’s starting to have trouble controlling. Suddenly I was recalling my theory that Rachel might possibly be going a little Castellan-Oracle herself, and then just as suddenly I can’t remember if I ever actually expressed that theory or not. But I’m going to pretend I did so I can feel smart.

But first there is the matter of Rachel’s urgent message: Percy is NOT the hero. But—his name is on the book! Did Rachel see the book? …Hey, does that mean Annabeth gets to be the hero like I keep rooting for?

“And see the world in endless sleep, The hero’s soul, cursed blade shall reap.”

Except maybe I don’t want her to be the hero, come to think of it, what with all that cursed blade stuff. Hmmm. Nico, perhaps?

And speaking of Nico, the kid’s got some gumption, yelling at Hades to help out. (Wait, did I just say “gumption”? What the heck?) With Hades still refusing, I wonder if Nico is the hero mentioned in the prophecy, and if his death will be the thing that finally causes Hades to fight beside the rest of the Olympians.

Hey, I just thought of something else: Nico might not, technically, be old enough to fulfill the prophecy himself yet. Except what if Kronos, lord of time and all, fast-forwards him up to the necessary age? Oooo…

Side note: Demeter and Persephone in the background, like a board socialite and her mother, are amusing. I enjoyed Demeter’s comment about farming for six months building character, and was thinking about my version of her until she called that into contrast by encouraging Hades to blast Nico out of annoyance. 🙂

But on to the next vision, and the heroic tragedy! So there’s this drakon coming that only a child of Ares can beat, and at the moment the Ares cabin is sulking in their tents. (Yes, I know they live in cabins, but I’m trying to make an Iliad reference here, folks.) The drakon arrives, and it’s a nice “we’re &@*%ed” moment as the tattered defenses go up against a venomous lizard 2/3rds the size of a football field. But wait! In comes the Ares cabin! Riding chariots! Charging against the drakon! And here’s me thinking Clarisse is getting her Rohan cavalry moment.

Except, blue eyes. And the voice is different. And as I slowly clue in on the fact that someone is pulling something here, and as I’m trying to figure out if the entire Ares cabin is a fake or just “Clarissa,” and if it’s part of some moral boosting plan or just trying to cheat fate, fake-Clarissa falls, Clarissa herself arrives and freaks out, and things become painfully clear: It’s Silena, who presumably took it upon herself to lead the Ares cabin to the battle when she couldn’t talk Clarissa herself into it.