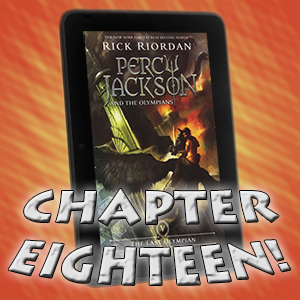 Things aren’t looking good at the start, here. Clarisse is locked in ice, wounded lay everywhere… But there is some bright spot of hope, because the party-ponies are gone! Yaaay! (Okay, so I guess that’s kind of a bad thing for Percy, but I’m looking at the silver lining here.) 😀

I’m loving this stand-off between Kronos and Chiron. (Guy took out the dracanae queen in a single shot, too!) Very tense, and I like to see Chiron in battle mode, I’m finding. And hey, Luke’s still in there somewhere–though he’s still pretty angry at the gods and Chiron here, prospects aren’t looking good for him to be very helpful even if he does get control…

And a paragraph after I write that, Chiron gets clobbered, knocked into a building, and buried in concrete. So, ow.

But things are looking up again when Nico appears–not for his accompanying skeleton army (which is of course useful to Percy’s side but not so exciting to me), but for the fact that Hades himself is riding behind him. I’m eagerly anticipating a good ol’ fashioned angry-ass god vs. titan throw down here. Hades makes for good cavalry (figuratively speaking), so far as I’m concerned. Though he’s different from my own characterization of him, Riordan’s take is compelling, complex, and thick with the kind of gravitas befitting the god of the underworld.

Hades wore black armor and a cloak the color of fresh blood. On top of his pale head was the helm of darkness: a crown that radiated pure terror. It changed shape as I watched— from a dragon’s head to a circle of black flames to a wreath of human bones. But that wasn’t the scary part. The helm reached into my mind and ignited my worst nightmares, my most secret fears. I wanted to crawl into a hole and hide, and I could tell the enemy army felt the same way. Only Kronos’s power and authority kept his ranks from fleeing.

“Hades,” Kronos growled. “I hope you and the ladies have come to pledge your allegiance.”

“I’m afraid not.” Hades sighed. “My son here convinced me that perhaps I should prioritize my list of enemies.” He glanced at me with distaste. “As much as I dislike certain upstart demigods, it would not do for Olympus to fall. I would miss bickering with my siblings. And if there is one thing we agree on— it is that you were a TERRIBLE father.”

If Hades gets clobbered, knocked into a building, and buried in concrete in the next paragraph, I shall be very put out.

[Hades] charged at the wall of force, but his chariot crashed against it and overturned. He got to his feet, cursing, and blasted the wall with black energy. The barrier held.

Awww, fooey. But at least he gets to kick some ass outside the barrier. I guess.

Paul grabbed a sword from a fallen hero and did a pretty fine job keeping a dracaena busy. He stabbed her in the gut and she disintegrated.

Paul?” I said in amazement.

He turned toward me and grinned. “I hope that was a monster I just killed. I was a Shakespearian actor in college! Picked up a little swordplay!”

I knew some Shakespearean actors in college, and I’m pretty sure stage combat is nothing like actual combat. But hey, dramatic license. 🙂

Percy’s mom goes for the more direct route, which you have to respect. When Percy saw her rummaging around in a police car and figured she was looking for the radio, I knew he was underestimating her. When she pulled out the shotgun and went all Army of Darkness on a giant, I was quite pleased. 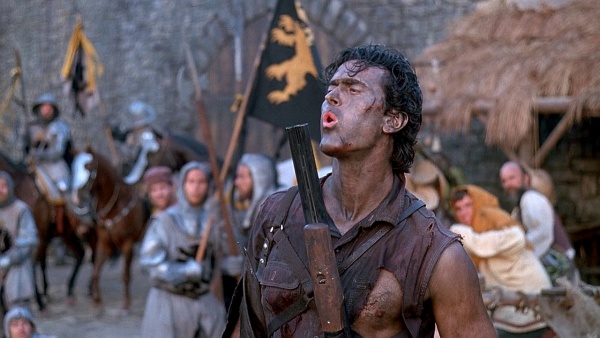 You can’t do that with a radio, Percy.
Er, well, I guess you can, but you’d look kinda silly.

So Kronos has entered the building, and Percy and the gang are going after him. Will he get to the elevators before they do? Will he be a jerk and not hit the “open door” button so they can share? Will the final battle be overplayed by easy-listening elevator muzak?!

I guess I’ll have to wait and see…