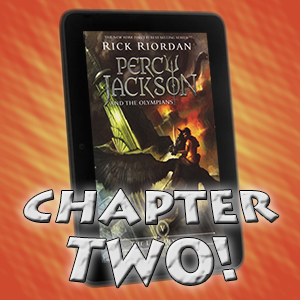 So if Percy’s and Beckendorf’s strike on the Princess Andromeda in the last chapter wasn’t enough to let us know we’re already in the thick of things, Riordan takes us down to Poseidon’s palace under the sea. …And now I’ve got that damned song from The Little Mermaid in my head.

This is a good chapter, which mostly handles a lot of (needed) set-up. We’ve got the Titans, via Percy-vision, confident of victory. We’ve got the reminder that Nico has some sort of plan that he sprung on Percy just after The Battle of the Labyrinth ended. (I’d left that out of my predictions, mostly because I have zero idea just what the plan might entail.) And then, oh yeah, Poseidon’s been fighting an undersea war with Oceanus for the past year, and there’s probably a spy at Camp Halfblood.

I enjoyed the glimpse we get of Poseidon’s palace, and the fighting itself. Riordan’s descriptions are evocative, and I got the sense of the scale and depth (no pun intended…well, maybe a little) of the current battle, if not the war itself. With Poseidon dispatching his commanders around a map of the battle, the destruction of that gargantu-squid, and the effects the war has had on Poseidon’s realm and appearance, there’s a lot of showing-not-telling here.

And yikes, it seems the battle does not go well, doesn’t it? It’s good to see Briares still supporting the cause, though.

Speaking of set-up and anticipation, there’s that one other little jewel Riordan sets before us: After having the full prophecy kept from him for the whole series, Percy’s soon going to hear it all. Now, I’m not much in favor of trying to hide prophecies from the people involved in them. It seems a prophecy goes far worse for people if you try to hide it, even for good reasons. Then again, prophecies can also go pretty wretchedly if the whole prophecy IS known, so…yeah. They’re twisty buggers to say the least. (Warning! Zeus Is Dead plug!)

“Next on 60 Minutes: Prophets – More trouble than they’re worth?”

I’m really hoping that Percy’s going to be able to hear it all from Chiron in the next chapter, though, because I’m bloody curious, dangit! 😀

I guess I ought to keep reading.

Hey, I wonder who the “treacherous nephew in the tuxedo” is who Krios mentions being not very good in a fight?