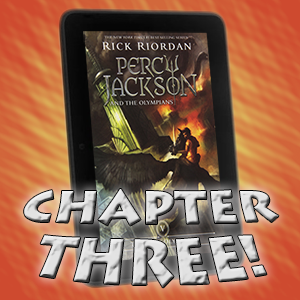 Alternate chapter title: “Only Godzilla Can Save Us Now”

I have no idea what’s about to happen, because I’m writing this entry before even looking at the chapter title! What chapter, you ask? Why, the third chapter in Michael Reads Percy Jackson: The Last Olympian, otherwise known as…um… *looks* Oh!

I Get a Sneak Peak at My Death

Well that sounds cheery, doesn’t it?

I’m doing something slightly different this time around. From your end, it probably won’t be too distinguishable from my regular entries in which I show you my stream-of-consciousness notes. The difference is this: In previous entries, I’ve made those notes as I read, then assembled them all and added some additional bits, THEN created the entry. This time, I’ve started the post and will be doing this, essentially, live as I go. (Exception: The alternate title caption up there, which I’ll do after I read.) It may not wind up looking too dissimilar on your end, but then again, it might be. So hey, let’s find out!

I wanna hear that story. 🙂

I like how Riordan describes Connor Stoll’s character here. I’m not sure I’d quite want him as a friend, but as a character to read, yes. (Wait, was he one of the guys who gave one of the huntresses a nasty rash back in book 3?) It looks like we’re getting re-introduced to Camp Halfblood, which I suppose is necessary for those who haven’t just picked this book up after reading the last one.

Percy’s talking to Chiron and Annabeth now, and I’m finding myself anxious for Percy to finish telling his tale and then demand the rest of the prophecy from Chiron. Tell us, you horse’s…um…body! Ah, here we go. To the Attic of Mysteries!

I wasn’t sure what she’d do for the “Great Prophecy.” I half expected her to start tap dancing or something.

Now I’m imagining this as an old Muppet Show sketch. Now what’s this about this oracle being the last one? And Percy’s never going back to the attic. Well, this is his last year at camp, no? Surely that’s all he means by that, right? Right?

Heh. The new Apollo leader is short and named Michael. As a fan of Apollo who’s also named Michael and was under 5-feet tall until age 17, I’m relating immediately. But still: Prophecy now! I’m too anxious to hear the prophecy to care what Michael and Clarisse are arguing about, honestly. But she demands satisfaction!

Aha! Here we go. Reacting to each line as I go, assuming I have reactions of note:

“And see the world in endless sleep, The hero’s soul, cursed blade shall reap.”

Percy immediately thought of Riptide, but I’m betting on Kronos’s scythe. How much more cursed can you get than that, after all?

“A single choice shall end his days. Olympus to preserve or raze.”

And that’s it. …I’ve got to say, I’m a tad underwhelmed. I mean, didn’t we already know that? Okay, I suppose we didn’t know that Percy’s choice would “end his days” (which I assume probably doesn’t mean get him killed, since that’s too obvious and he’s narrating the book – though of course Percy doesn’t know that), but I was hoping for a little more guidance here. I expected a little more substance to it after all the build up beyond, “Oh, and it’s going probably going to be fatal.”

I wonder if Percy will react the same way. *reads on* Looks like Jake and I had the same idea about Kronos’s scythe.

The mist shimmered. I saw the familiar image of a smoldering volcano— Mount St. Helens. As I watched, the side of the mountain exploded. Fire, ash, and lava rolled out.

Well, crap. Did I mention I live in Washington State? That can’t be good for our earthquake forecast.

“It’s him,” I said. “Typhon.”
I was seriously hoping Chiron would say something good, like No, that’s our huge friend Leroy! He’s going to help us!

Woo hoo! Typhon! (And I’m now seriously thinking about putting a giant monster named Leroy in the Zeus Is Dead sequel.) Now all the gods are fighting him as he crosses the United States on his way to New York. (Boy, where’s Godzilla when you need him? Or heck, even Gamora, who loves all children!)

I agree with Percy: Typhon is probably a diversion. One heck of a diversion, of course, but still. Kronos is tricky. And Olympus is unguarded as a result, no?

Three chapters in and everyone’s in seriously deep cyclops poop. I’m totally on board with this! Now that I’ve seen the full prophecy (and I’m still disappointed, but I’ll get over it), I’m thinking back to what Clarissa is angry about. Something about plunder and loot, was it? Curious. But I have no guesses as to what it might be.

Speaking of Clarissa, I like that she’s struck up such a loyal friendship with Silena. It humanizes her a little more, and it also seems to fit, given the relationship between Ares and Aphrodite.

So, things are about to get really, really bad. And I’m starting to think that Nico is likely the one to save them all. Who hid him and Bianca away, anyway? Has it been firmly established that Hades did that? I wonder…