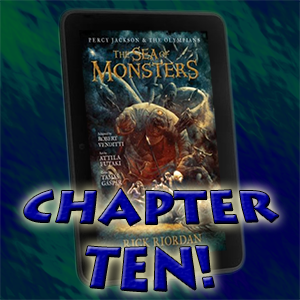 In which we get the slightest glimpse of a centaur rave…

Dead people, donut people, and knots! All this and more in part ten of Michael Reads Percy Jackson: The Sea of Monsters…

We Hitch a Ride with Dead Confederates

This may be my favorite chapter so far! I got some hints at unknown mysteries, one of my favorite monsters (tied to a great concept), humor, and even a bit of emotional resonance.

Percy uses a limited dose of wind to make a rocket booster that gets them away from the Princess Andromeda lickety-split–that may be my first time ever actually using that term in my life, but somehow it seems appropriate here–and soon enough they’re down in Florida. The Princess Andromeda, it seemed, had moved from New York to Florida by traveling at what I believe J.M. Straczynski termed “the speed of plot.”

That’s one thing I love about writing fantasy: This sort of thing can be perfectly justifiable, as it is here. I’m not complaining! I did something similar in Zeus Is Dead to get a couple of mortals, a muse, and a “diminished” Apollo from Reno, NV to the Greek coastline. (In their case they took a motorboat down the River Styx, which in my universe can be used as a quasi-dimensional shortcut to various places around the globe.)

But you know it, they’re camped in a half-blood supply cache (nice thinking, Annabeth), reminding me of something I’d forgotten about, and running afoul of a hydra. Oh, and there was a call to Chiron in there, too.

Okay, probably not this.

The thing I’d forgotten about was that Annabeth had a history with Luke. It’s good that Riordan hasn’t forgotten this, giving us (i.e., me) a glimpse of how it’s affecting her that the boy she had a crush on (or was there more to it than that?) has now turned into a homicidal jackass. There’s got to be some frustration and betrayal in there. I hope she’s not blaming herself for not seeing that in him earlier, though, because that’s just plain not healthy. Hopefully she’s not so foolish as to think so. She’s the daughter of the goddess of wisdom, but then being a teenager does make us believe some rather foolish things about ourselves sometimes, too. 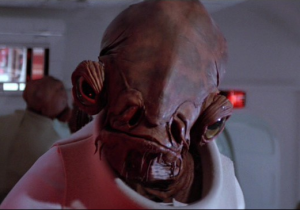 This chapter also helped me realize that I’ve been misunderstanding what they meant by the Fleece being a trap. At least I think I have: The Fleece itself isn’t meant as a trap, but poisoning Thalia to give people a reason to find the Fleece (which Luke can then steal) is a trap. In other words, it’s not a trap to catch whoever goes looking for the Fleece, it’s a trap for the Fleece. So I’m on board with this now. So what’s he need to Fleece for, I wonder?

Now, before I get to my favorite part of this chapter, I’m going to take a moment to be just a little insufferable. (Skip over the next three paragraphs if you like.)

I make notes sometimes as I read to better write these posts, I’d originally made a note wondering how Percy could managing to hold onto the thermos/wind-rocket booster while it blasted with enough power to propel the lifeboat such a horrendous speed, but I quickly decided that he’s close enough to water that he’s got a bit of a strength enhancement going for him.

But then Percy mentions the lifeboat going at “100 knots per hour.” This is an incorrect use of the term–a knot is a measure of speed (1 nautical mile per hour) rather than distance–unless Percy meant to describe their acceleration (at a rate of 100 nautical miles per hour per hour) and they were actually going 100 knots faster than they were an hour ago. It’s probably a safe bet that he didn’t mean that. Then again, Percy was never very good in school. Then again (again), Percy’s heritage lets him estimate the exact distance they’ve traveled in nautical miles, so…whoops!

Thus ends today’s mathematics lesson for the day. Understand that this really had no effect on my enjoyment of the chapter, by the way. Heck, it may even have made me enjoy it just a little more because it gave me an excuse to be an insufferable know-it-all! 😀

So then comes the hydra attack. I love, LOVE the concept that rapidly spreading chain stores are linked to hydra. It’s brilliant, Riordan, and I wish I’d thought of that! It’s a hectic and exciting fight to read, made all the better by the fact that even with Tyson’s help, the hydra is more than a match for the three of them. Some monsters deserve a little respect, and the hydra is one of ’em. Hydra should not go out like punks, taken down by three teenagers, demi-god or not. (I’m lookin’ at you, The Lightning Thief film adaptation!)

Percy, as is his wont, is a bit slow on the uptake, refusing to see the problem with a donut shop out in the middle of nowhere. (Geez, Percy, do you even READ the books?) Does anyone else get the feeling that without Annabeth, Percy would have been monster-stew a dozen times over by now?

Okay, so some might argue that Clarisse’s arrival feels a little deux ex machina, but I don’t care. She does it with style, and a number of cannons, and that was good enough for me. I didn’t even consider that it was a D.E.M. until a moment ago when I started this paragraph. I mean, come on, commanding an undead-crewed Civil War ironclad? She may be a pain in the ass, but there’s no denying that she’s good at what she does: Rather than cutting off heads and burning the stumps, she just takes the whole Aliens approach and nukes the site from orbit. 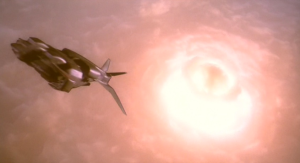 It’s the only way to be sure…

My favorite line from this chapter goes again to Tyson. I get the feeling he’s going to be getting a lot of these.

“Powdered donuts,” Tyson said earnestly. “I will look for powdered donuts in the wilderness.” He headed outside and started calling, “Here, donuts!”

I admit it. I full on snorted. Also, Tyson’s starting to make me think of Drax… 😀 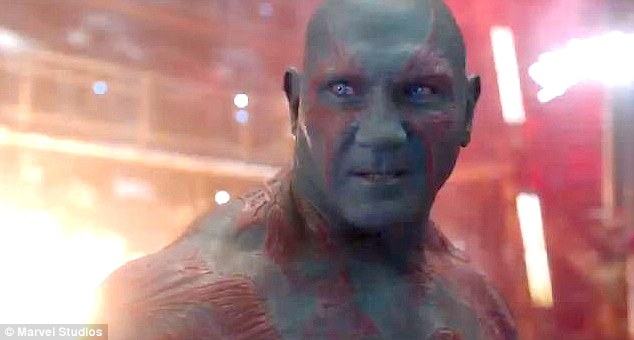 “NOTHING goes over my head! My reflexes are too fast, I would catch it.”

So that’s it for now. I DO want to know what happened with Thalia. Will she ever be back in human form? Another thing I want to know: What does everyone think of Clarisse? Let me know in the comments! (No spoilers, of course…)