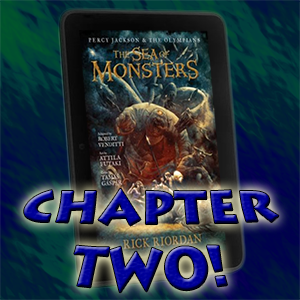 Are they technically cannibals if they’re not human to begin with?
Just sayin’.

Doesn’t this kind of stuff just always happen on the last day of school? Yearbooks, tests, and burning down the gym. Ahh, memories. What am I talking about? The second installment of Michael Reads Percy Jackson: The Sea of Monsters, of course!

I Play Dodgeball with Cannibals

The monsters have found Percy, but at least they had the courtesy of allowing him a nice year of quality education before they pounced, right? Oh, and Annabeth is back! But I’m getting ahead of myself.

I suppose I’m being generous at that whole “quality education” thing, given how haphazard the lessons seem to be. But at least it seems fun. (On a side note, we did something akin to that Lord of the Flies exercise in junior high. It wasn’t related to Lord of the Flies, but…Government class, I think. The whole class was stranded on a desert island. It was a disaster. I wound up having to shoot someone with a flare gun because they were threatening people with the only pistol on the island, and then nearly everyone died because we didn’t come up with a good plan for surviving a hurricane.) 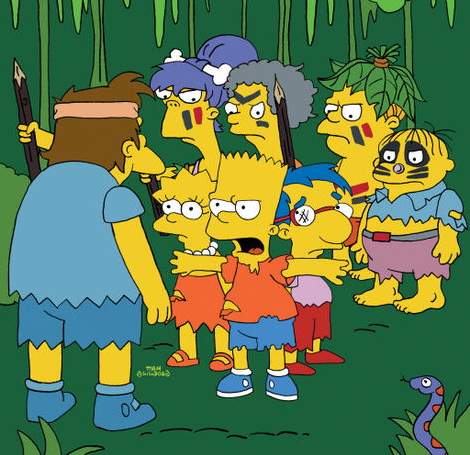 Dramatization of my own junior high “deserted island” experiment. Not pictured: flare gun.

I was sorry to discover that my thinking Percy was having a good year wasn’t quite accurate. Sure, it was better than years before, but he’s a social pariah with only a single friend (Tyson) that everyone makes fun of him for.

Speaking of Tyson, right from his introduction I was suspicious of him being something other than a normal human. Perhaps that was insensitive of me to assume based only on him being homeless, huge, misshapen and scared of everything, but this is a Percy Jackson book. Have we met anyone who was out-of-the-ordinary and NOT a regular human?

Well, Gabe, I suppose. But he did have those superhuman stench-powers of Percy-cloaking…

Wait a minute. His name is Tyson, and he’s always scared of things…

The whole dodgeball incident pretty much solidified that theory for me. Percy seems a tad slow at picking up on it himself, but I suppose when Laistrygonians are throwing incendiary grenades at you, it doesn’t really create the best environment for deductive reasoning. I figured he was someone sent to watch over Percy, but the whole “scared of everything” deal would seem to make him ill-suited for that. Unless, perhaps, he’s simply scared of doing anything that might accidentally hurt a non-monster?

Annabeth had a great entrance made even better for punching out Sloan. (Yay, cathartic violence!) I hadn’t even considered that it was her on the fire escape. Totally surprised me there, book! I didn’t consider that the female whisper earlier in this chapter was her either, so I suppose I really can’t throw stones at Percy missing a thing or two. (Then again, when has that stopped me before?) 😉

So now Percy’s on the run again! At least he’s practiced at that. I’d like to think the adults would believe him that he didn’t start the destruction when the rest of the class backs him up on what happened (even if they just saw Molotov cocktails, Percy wasn’t the one throwing them), but that would take time, and Annabeth did say to hurry…

My favorite line from this chapter is chosen both for humor and nostalgia:

“Mrs. Tesla told us that we had to mix chemicals until we succeeded in making something explode.”

Where were teachers like her when I was in school?! My high school chemistry teacher, Mr. Bond, always scoffed at my friend Matt’s suggestion for “blast-radius prediction labs” and insisted we—get this—be CAREFUL when handling chemicals. No fun at all. Then again, he did show us the thermite reaction (see below for example), so at least that was something.

I don’t recall hearing about Laistrygonians before. I should really Google that, since I love learning things about Greek mythology that I didn’t already know, but I’m afraid of being spoiled for future TSoM plot developments. Can anyone tell me anything about them from the original mythology that doesn’t spoil anything? (Or are they entirely an invention of Riordan?)