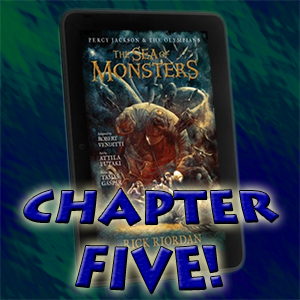 You leave for nine little months and everything falls apart.

Well Camp Halfblood is certainly going to Styx, isn’t it? Hades convicts on work release, constant monster attacks, and a loss of appetite for pizza! All this and more in the fifth part of Michael Reads Percy Jackson: The Sea of Monsters…

I Get a New Cabin Mate

When I read the chapter title, I figured the new cabin mate would most likely wind up being Tyson because no one else wanted him in their cabin or something. Yet I was hoping it meant that another child of Poseidon would be turning up. I thought it would be a fun little twist.

I did not expect both guesses to be right. I could claim a double-victory here, but since I didn’t see it coming at all that Poseidon had fathered Tyson, I’m chalking this up as being wrong. But I like it! Plus it completely makes sense. Mortals are off-limits (and the Greek gods apparently dislike birth control), so of course Poseidon’s pursuing other, ah, interests.

So now, did Poseidon lead Tyson to Percy, or did he simply take advantage of the situation by claiming Tyson when he happened to camp so that he’d be able to stay with Percy? The former sounds more likely—or, at least, less coincidental, which I prefer.

Speaking of Tyson, Riordan made good use of his unfamiliarity with the camp to catch up any new readers. Speaking as a writer, that’s a useful device. (It can be overdone, like anything, but Riordan’s in no danger of that yet.)

I learned last chapter that Chiron was out, but I didn’t realize it had happened so recently. I’m glad we got to see him again before he left. Now am I just a suspicious bastard, or is Chiron using reverse psychology to launch Percy on a quest to find whatever it is that will heal Thalia’s tree? He drops that tidbit of info, but then says it’s too dangerous, he must stay in camp and learn, etc. There’s no way Percy’s going to let that stop him, and Chiron’s too wise not to know this. Given that Chiron’s immortally is at stake if this stuff isn’t fixed, one can hardly blame him.

This way, Chiron gets to avoid liability for sending Percy out there. (“I told him not to do it! We’ve got it on camera, even!”) Notice that he makes Annabeth swear on the Styx to do her best to keep Percy from danger, but doesn’t make Percy swear to stay at camp. Devious centaur. 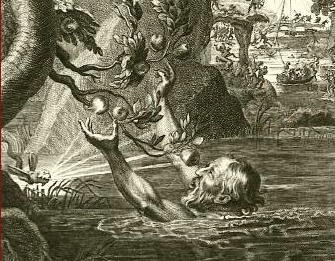 At least Tantalus is still cursed. I’m sure that will make him even more pleasant to deal with.

And then he’s gone, and we’re meeting Tantalus. Who the Styx thought it was a good idea to hire a guy guilty of dicing and cooking his own son to be the activities director of a kids’ camp?! Is the job market so great that they couldn’t find anyone else? What, were Freddy Krueger and Dolores Umbridge already busy? I smell a fix. Someone wants to sabotage the camp. Dionysus? Someone else?

At least he gets Percy’s name right.

My favorite line from this chapter comes directly from Percy:

“Would this be the super-dangerous prophecy that has me in it, but the gods have forbidden you to tell me about?”

You know what? Forget going to save the Thalia-tree. Go learn more about this prophecy, first! (What could possibly go wrong?)

Did you know that, in addition to subscribing to my newsletter (and getting a free copy of Mythed Connections), you can also sign up to get email alerts each time I’ve made a new blog post? Go here to sign up, or click the link in the sidebar!