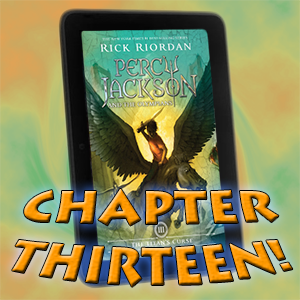 So it turns out that Bianca’s older than she looks, we meet another goddess (woo-hoo!), and a colossal junkyard throw-down leads to another aspect of the prophecy being fulfilled. All this, plus I get nitpicky in the thirteenth chapter of Michael Reads Percy Jackson: The Titan’s Curse…

We Visit the Junkyard of the Gods

So let me talk about the last part of this chapter first: The trek into the Junkyard of the Gods and the ensuing battle with the proto-Talos. I realize that this is sort of in the tradition of a mythological journey, going from danger to danger in order to get to a place, but somehow the fact that there’s no particular reason for them to be wandering the junkyard is a bit off-putting to me. The only reason they’re there at all is because this just happens to be where the boar stopped. There’s nothing in the junkyard they needed that they were questing after. It was just plunked down in front of them like some random encounter, which feels unsatisfying.

Come to think of it, in addition to there being little reason beyond happenstance that for them to find themselves AT the junkyard’s edge, there wasn’t really any reason given for them to even go into the junkyard at all, was there? They had a road to follow right where the boar stopped, but instead of following that, it was into the junkyard they go. (Or did I miss something? I do that sometimes.) Okay, so there is this…

“When we get through this junkyard, we must continue west. If we can find a road, we can hitchhike to the nearest city. I think that would be Las Vegas.”

…except they already had a road to follow. See this from earlier in the chapter:

Ahead of us was a two-lane road half covered with sand. On the other side of the road was a cluster of buildings too small to be a town…

And beyond that, the description goes, is the junkyard.

But oh well. I don’t want to take up this entire entry nitpicking. Here’s what I did enjoy in this chapter:

1) Percy does ask Grover if that really was Pan, so good on him for not making me wait, even if the answer is essentially “I don’t know.”

2) The reveal that Bianca and Nico had lost years inside the Lotus Casino, which explains why she didn’t think a D.C. subway existed (and thus made me think that there wasn’t a D.C. subway myself). You’ve all been laughing at me about that one, haven’t you? Admit it! 😉 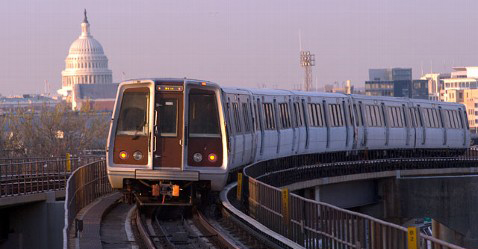 I’m ashamed. Have I not played hours and hours of Fallout 3?

3) Trying to figure out why Bianca was able to destroy the zombie. I respect characters who notice and analyze things, and I like to see them discussing things as a coherent team, because I like teamwork and it makes me feel all warm and manly inside.

4) Aphrodite! Each time a new divine character appears, I love it, because to me, it’s the gods who are the most interesting parts of Greek mythology. I enjoyed Riordan’s characterization of her, and how he described her partially via the effects she was having on Percy. I’m tempted to compare and contrast Riordan’s version with my own take on Aphrodite in Zeus Is Dead, but that’s probably best saved for another time.

I’m also with Thalia and Zoe, though: I’m not trusting her here, but then I don’t know what she’s up to, either.

5) The fight with proto-Talos. Despite my previously stated issues with this sequence’s existence, the action itself is well-written, and it’s easy to follow what’s going on. Speaking from experience, writing action with so many characters can be a real pain in the butt.

So it falls to Bianca to fulfill the part of the prophecy about being lost in the desert. I don’t THINK she’s dead, however. That which is lost CAN be found, after all. As to when and how, I’m not sure. Is she still buried in the Talos-heap, or spirited away somehow, perhaps by her still un-named divine parent?

These are the things I wonder.

So that’s it for this chapter. Do you agree/disagree with me on the junkyard thing? Let me know!
Go ahead, I can take it. 🙂