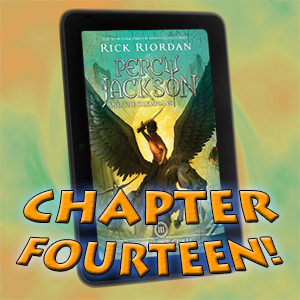 A strangely-named mystery girl, goddesses in elevators, and the return of sea-cattle! That’s right, it’s the dam fourteenth chapter of Michael Reads Percy Jackson: The Titan’s Curse, a.k.a…

I Have a Dam Problem

It’s guilt all around for the loss of Bianca, which is natural, and I’m not complaining about it. I just needed a lead-in to this entry…which I’ve now squandered by stopping to explain it. I need to be careful about that kind of stuff, huh? So let’s start off slow, with this reactionary little tidbit that I just have to get off of my chest:

My hand closed around the little figurine that had cost her life.

YOU TOOK THE FIGURINE THAT THE DUMP ROSE UP AND TRIED TO KILL YOU FOR?!? No wonder this book has the word “curse” in the title! You do NOT take the object from the land of cursed junk, especially when said land of cursed junk has already tried to stop you! Nothing good can come of this, kid! Have you not SEEN a horror movie? Hey, Percy! There’s a flesh-bound grimoire in the basement of the abandoned shack! Let’s go read it aloud! What could possibly happen?!

The chapter does give us a little bit of a breather to recover from the proto-Talos attack and Bianca’s departure before taking us toward Hoover Dam for a fun little sequence that I enjoyed much more than the junkyard. And yes, I said “Bianca’s departure,” because I can’t possibly imagine that she’s dead, despite what Percy says…

I wanted to believe that Bianca was still alive somewhere. But I had a bad feeling that she was gone for good.

Oh, no, I’m not falling for that one again, Riordan! 😀 Oh, and speaking of Riordan and Percy, I ought to say that they have WAY too much fun with the “damn/dam” thing. I really ought to. But I can’t deny, it made me grin, so…

Here’s another dam question: How the heck did Bessie get all the way there from the Atlantic Ocean? Then again, I know so very little about cow-serpents. They may have powers of teleportation. Or flight. Or transwarp drive. One can never be sure, after all. Given that she’s appeared a second time, I’m starting to get the feeling she’s going to be playing more of a part later on. Maybe I’m over-using meta-knowledge, but Riordan could have had Percy notice the skeletons coming in some non-aquabovine-related way.

“Well, it’s either a sword or the biggest toothpick in the world,” she said. “And why didn’t it hurt me? I mean, not that I’m complaining. Who are you? And whoa, what is that you’re wearing? Is that made of lion fur?”

Something’s DEFINITELY up with Rachel Elizabeth Dare, but I’ve no idea what it might be yet. I’m hoping that’s not the last we’ll see of her—it doesn’t seem like she’d just be a one-shot character—because I sense something interesting here, and I like her attitude. Strange last name she’s got, though.

Thanks for reading my dam entry! Don’t forget to sign up for alerts when I publish a new blog post!
See you next time…