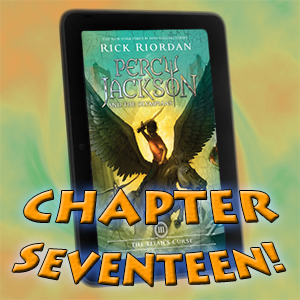 Finally I’ve gotten a chance to read more Percy Jackson! Aside from other things I’ve been busy with on the blog, and novel-writing, my laptop went on its own little adventure back to the ASUS repair center because it suddenly no longer believed it had a hard drive or operating system. It was ever so much fun! But enough of that, because we’ve got…

A climactic battle, an impossible-to-survive fall, and I feel silly for not having realized something long before now. But hey, watching me feel silly is part of the fun, isn’t it? So let’s take a look at chapter 17 for Michael Reads Percy Jackson: The Titan’s Curse…

I Put on a Few Million Extra Pounds

So let’s get to the “Why didn’t Michael realize this before now?” portion of our program right away: The titular Titan’s Curse is having to hold up the sky! I completely didn’t get this until right up to where Percy has to take it on himself. One might think that I’d have figured it out before then. I guessed the general was Atlas long ago. Why did I miss this?

My only defense, flimsy as it is, was that I was expecting it to be a new curse created by a Titan to inflict pain on others. It didn’t even occur to me that the possessive meant that it was something a Titan had already been cursed with. So my brain fell into that trap of my own making and completely blinded me to this. Ah, preconceived notions and confirmation bias. Aren’t they fun? 😀

This chapter also gave me a nice little education/refresher:

“This is the point where the sky and the earth first met, where Ouranos and Gaia first brought forth their mighty children, the Titans. The sky still yearns to embrace the earth. Someone must hold it at bay, or else it would crush down upon this place, instantly flattening the mountain and everything within a hundred leagues. Once you have taken the burden, there is no escape.” Atlas smiled. “Unless someone else takes it from you.”

This is one of those things in Greek mythology that I’d always sort of wondered about, but never quite looked into myself: how the Greeks imagined, logistically, the act of holding up the sky, or the world, depending on who you asked—hence my confusion. I’d left Atlas out of certain parts of Zeus Is Dead because he was too busy holding up the world to get involved, so I didn’t have a need to research it for the book, either. It’s always nice when reading for enjoyment also lets us learn things, isn’t it?

His voice faltered. “It’s my last chance. He will use the other way if you don’t agree. Please.” I didn’t know what he meant, but the fear in his voice sounded real enough. I believed that Luke was in danger.

Oh, gee, darn. Something horrible might happen to Luke. The poor thing. I am so terribly sorry to hear this. Is the sarcasm coming through in the text well enough here? Every time we encountered Luke, I lost a little more respect for him. So I wasn’t sorry to see this…

They were staring at Luke’s broken form on the rocks. Despite how much I hated him, I couldn’t stand to see it. I wanted to believe he was still alive, but that was impossible. The fall was fifty feet at least, and he wasn’t moving.

Yaaay! I’ve hated Luke ever since the end of The Lightning Thief, and while he’s been a threat, he’s never struck me as anything more than a sniveling, weak-minded, ignoramus, loser of a threat. (Note: This is a criticism of Luke himself, not Riordan’s writing. I enjoyed hating the sniveling ignoramus.) I understand that Annabeth and Thalia had history with Luke, but I never quite related to that history myself. The positive encounters Percy had in TLT weren’t enough for me to develop an affinity for him, and whatever affinity I did have for Luke in TLT crumbled upon the reveal that he’d had been plotting against Percy from the beginning, and was always a jerk. So, yeah, I feel badly for Annabeth and Thalis, but I’m glad he’s dead.

Finally, I cannot end this post without making special mention of this:

Just as the army of monsters came over the hill, a Sopwith Camel swooped down out of the sky. “Get away from my daughter!” Dr. Chase called down, and his machine guns burst to life, peppering the ground with bullet holes and startling the whole group of monsters into scattering.

I certainly didn’t see THAT coming, and it was utterly delightful.

In the movie, Dr. Chase will be played by Randy Quaid.

Now, is Luke REALLY dead? Sure, we see his body, and but this is a fantasy novel, and it’s a fall that was impossible to survive. So I can’t help but wonder…

Or maybe I’m just being kooky. I do hope Luke stays dead. What about you? Were you happy to see Luke go, or am I just a heartless bastard?
Let me know in the comments, and thanks for reading! 😀