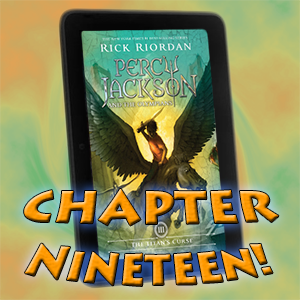 In which Mr. Moo gets a stay of execution, and in which no one calls him Mr. Moo but me.

So I’ll be the first to admit that my reading of The Titan’s Curse has gone really slowly—far slower than I’d have liked to have done for you all who have been with me on the journey. I feel bad about that, and the book itself is now piling on:

For a minute we stood there regarding the palace, the way we’d stood together in front of Westover Hall, what seemed like a million years ago.

I know, book! I know! (Wait, what do you mean it’s not all about me?) Anyway, no more stalling! On we go with the nineteenth post in Michael Reads Percy Jackson: The Titan’s Curse, aka…

The Gods Vote How to Kill Us

Riordan piles on the foreboding to get this chapter going: The descriptions of Olympus are grand with power. Thunder and lightning swirls around it. Percy himself feels a sense of doom. And then we’ve got Blackjack’s “If ya don’t come back, can I have your cabin for my stable?” It’s effective.

It also reminded me of this boy from Three Amigos…

Now at first I jumped to conclusions when this came up soon after Percy’s arrival:

“The Council has been informed of your deeds,” Artemis told us. “They know that Mount Othrys is rising in the West. They know of Atlas’s attempt for freedom, and the gathering armies of Kronos. We have voted to act.”

Initially, I took this to mean that all of the discussion between the gods got skipped over by the narrative, and hoo boy, was I disappointed. I wanted to see some Olympian political intrigue! I had a lot of fun crashing divine egos together in Zeus Is Dead, so I was eager to see Riordan’s take. For a moment, I thought that all I’d get was the grumbling from some of the gods after Artemis’s line above as a hint that arguments went on before Percy’s arrival.

So sometimes I jump to conclusions. Sue me. Jumping is fun! (Oops.) I was happy to find myself wrong as I got to witness some divine arguing, just not about the Titan threat.

Continuing the surprises was that Thalia’s joins the huntresses and stops aging. I totally did not see that prophecy-loophole coming. (It sounds like I’m being sarcastic there, but I mean it sincerely. Nicely done!) Granted, Thalia’s instant agreement to do did feel a little out of nowhere. On the other hand, as I spent far too long reading through this book, my slow pace likely makes things not connect as well as they ought to if I were reading this normally. So, benefit of the doubt; and as I said, I do like the twist. 🙂

“I must join the Hunt, Percy. I haven’t known peace since… since Half-Blood Hill. I finally feel like I have a home.”

I suppose spending years as a tree would make a person be more inclined to serve the nature goddess, now that she mentions it… (And yes, I know that’s not entirely her point here.) 🙂

Percy and Mr. Moo get spared, too. While I didn’t figure they’d kill Percy in the middle of his own series, I really enjoyed the discussion there. The highlight for me was Athena. I love her Athena’s characterization here. Her counsel to kill Percy was harsh, but the fact that she gave it anyway, telling what she considered to be the hard truth without taking pleasure in it, makes her the sort of character that interests me. I do hope we’ll see more of her. 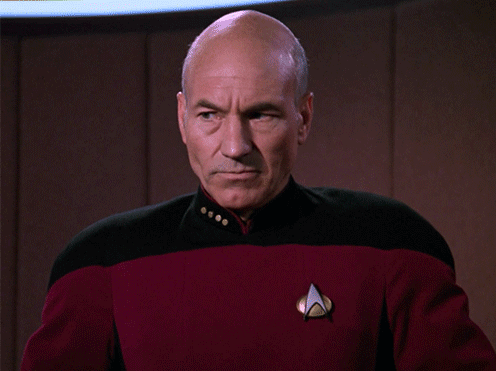 I get the feeling Athena would like Captain Picard.
Or vice-versa.

I’ll end with Poseidon’s confirmation that Luke did indeed survive his plummet. Percy’s understandably bothered by this, and I can sympathize: I don’t LIKE Luke! And I don’t mean that in the good way that you’re supposed to dislike a villain. Yeah, I know I said I liked hating him before, but I’d had my fill of that; it was time for him to die, and I was glad for him to go. He’s a wiener, and I wanted him supplanted with a different villain-type in his place. Supplant the wiener!

Granted, we do get Poseidon’s comment that Luke is “an interesting case” for how he tricked Annabeth into taking on the curse, so perhaps there’s hope. And I was at least treated to this:

Lord Poseidon has been given permission to unleash his full fury on the cruise ship Princess Andromeda and send it to the bottom of the sea.

Woo hoo! Thank you book. You have pleased me. You may continue…

See you next time for the final chapter of The Titan’s Curse!