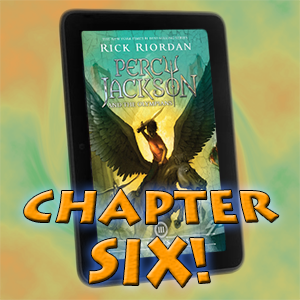 Let’s see, who’s dead? Who did they meet in Hades? I’m blanking.

Capture the Flag, troubling brochures, and Grover gets a bit creepy. Oh, and something-something-prophecy. All this and more on the sixth chapter of Michael Reads Percy Jackson: The Titan’s Curse, aka…

This felt like a pretty quick chapter, and wasn’t one of my favorites due to my being mildly annoyed with Percy. I’ll get to that in a moment, but first, Grover’s really quite, ah, bedazzled with the Hunters, isn’t he?

Grover blushed. “I was sort of camped outside the Artemis cabin.”
“What for?”
“Just to be, you know, near them.”
“You’re a stalker with hooves.”
“I am not!”

Uh, no, Grover, I’m going to have to go with Percy on that one. Creepy. 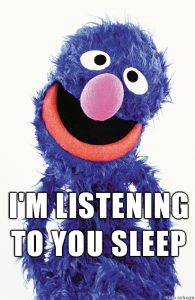 But I’d mentioned being irked with Percy, hadn’t I? It primarily comes down to his moping most of the day about his dream instead of talking to anyone about it who might have some insight. It’s true to Percy’s character, but it’s a bothersome trait for me to read. I hate when characters decide not to do something just because there’s a possibility that it won’t lead to results, even though the act of trying costs them nothing.

After that, I sat in the empty chariot stands and sulked. Down at the archery fields, Chiron was conducting target practice. I knew he’d be the best person to talk to. Maybe he could give me some advice, but something held me back. I had a feeling Chiron would try to protect me, like he always did. He might not tell me everything he knew.

So Chiron MIGHT not tell him everything he knew, so instead he goes to talk with the Oracle. The Oracle? Because Oracular visions are always so straightforward??

So when the Capture the Flag game began, it just felt too much like filler, possibly because I was bothered by Percy’s lack of action up to that point. I’m not sure yet if the game itself served any purpose beyond having a setting for the Oracle to appear. I won’t really know for sure until I finish the book and look back, either. Is it to create a rift between Percy and Thalia, or was it just to show more of the Hunters and add an action scene for the sake of it? I’m honestly not sure, and I’m aware my feel for this scene is colored by my wanting to toss Percy into Charon’s doorway and make them talk, so I guess I’ll just wait and see. 🙂

Note: I’m on day 4 of quitting caffeine cold-turkey, so I might be a teensy more cranky than usual, too.

I DID like that, for some mysterious reason, the Oracle made a prophecy-delivery, and she didn’t even charge extra:

Five shall go west to the goddess in chains,
One shall be lost in the land without rain,
The bane of Olympus shows the trail,
Campers and Hunters combined prevail,
The Titan’s curse must one withstand,
And one shall perish by a parent’s hand.

Suppose Hermes will kill Luke? Then again, there’s nothing that says that the one shall perish by THEIR parent’s hand, is there?

One final thought: Grover found Hunter brochures in Annabeth’s backpack. So she was possibly thinking about joining the Hunters? Is this what she should “probably tell” Percy? Or did she just have the brochures because they’re trying to recruit her and what she has to tell Percy is something else? The former is the more straightforward option, but I’m not willing to bet on it just yet. Riordan might be trying a fake-out here (and I really like that I can’t predict which way it will go).

So is the Oracle going to live out there by the river for a while now, or is she just resting before she goes back? If Chiron can get her a van to have some shelter there, then the Oracle will have plenty of time to deliver mysterious prophetic visions when…she’s livin’ in a VAN down by the RIVER!
That’s a reference for those who remember the early-nineties. I’m old.