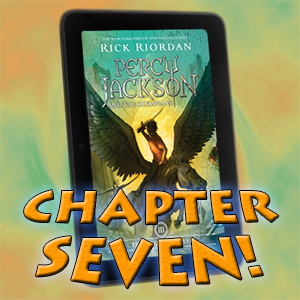 Percy’s mom has got it goin’ on.

Percy gets left out of a quest, interrupts his mom’s date and to where she encourages him to go anyway so she can make time with some Paul guy (go Percy’s Mom!), and falls asleep watching the ominous dream channel. Also, the hippocampi need help with something. All this and more on the seventh chapter of Michael Reads Percy Jackson: The Titan’s Curse, a.k.a….

Everybody Hates Me but the Horse

Before I get into the rest of the chapter, allow me to throw some personal stuff your way: I’ve never been someone who has been intensely competitive. I was the smallest kid on the playground, not terribly athletic, and learned at an early age that if all I cared about with regard to playing a game was winning, I was going to wind up making myself miserable most of the time. The key to my having fun playing games and sports was to–get this crazy idea–enjoy what I was doing regardless of the outcome.

Because of this, I sometimes have trouble relating to people who get ultra competitive, especially in cases where there’s literally nothing at stake but the humiliation that they’ve subjected themselves to feeling. Still, I do remember some years in elementary school–before never winning a ribbon in end-of-year field day competitions, getting picked last when choosing teams on the playground, and being on a youth soccer team that didn’t win a single game all season made me seek fulfillment in the act of playing rather than winning–where there’s a lot of peer pressure to keep my team from losing.

One of my favorite story lines from Calvin & Hobbes (by Bill Watterson).

My point here with all of this personal rambling is to say that I was torn between dismissive and compassionate with regard to Percy’s feelings about losing the game of capture the flag. In many ways, he and I are very different. (I mean beside the fact that my dad is not, so far as I’m aware, a sea god.) Fortunately for my little emotional conundrum, things soon moved on.

I have less patience for Thalia at this point, what with the immature silent treatment she sent Percy’s direction. (Then again, she’s a teenager. She’s supposed to be immature.) All these type-A god-child personalities running around… 🙂

I did enjoy the little camp council they all had about what to do next with regard to the prophecy. I may be strange, but I always enjoy scenes where people sit around and discuss what to do. Really, I’m serious. The Council of Elrond is one of my favorite chapters in The Lord of the Rings. Though of course this one wasn’t nearly as long. They’ll be sending 3 hunters and 2 campers, and Percy isn’t going to be one of them.

But, hey! They only picked five because the Oracle said they would, right? What if they’d decided to take six? Would one immediately be struck down? Or is this a self-fulfilling prophecy? Is the Oracle just power-tripping?

Speaking of the council, a few more things about that:

“One shall perish by a parent’s hand.”

I’m still betting that this doesn’t mean by THEIR OWN parent’s hand. Just that someone will perish at the hands of someone who’s had kids. Yeah, I know, maybe I’m looking too hard for loopholes due to an over-developed sense of genre-savviness.

I’m also betting that Phoebe is the one who’s going to die. She’s not a main character. She just got introduced right before being picked. Girl’s got “red shirt” written all over her. Heck, she doesn’t even have a last name!

This time around, as I’m not quoting as much as I’ve done recently, I’m bringing back the “favorite lines from this chapter” item:

Chiron gazed at the saltwater spring gurgling in the corner of the room. “Thalia would not have been my first choice to go on this quest. She’s too impetuous. She acts without thinking. She is too sure of herself.”
“Would you have chosen me?”
“Frankly, no,” he said. “You and Thalia are much alike.”

Ah, Chiron. I knew there was a reason I liked you.

Usually I end these posts with some big fancy thing to say in bold here! But I can’t think of what to write!
So this is all you get!
WHEEE! 😀