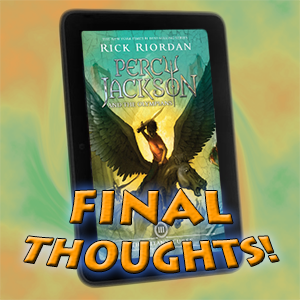 So at last I bid a fond farewell to The Titan’s Curse. Though this one also took me the longest to blog my way through, that’s nothing to do with my enjoyment of it. In fact, this is my favorite of the series so far. Things got complex, stakes got higher, and save for my dislike of the junkyard, I enjoyed everywhere the plot and characters went. I’m eager to see how book 4 measures up.

But first, let’s look over my flailing attempts at predicting the book before I cracked the cover!

Not batting 1000 by any means, but I could’ve done worse, right? And now here’s my chance, as I make my predictions for book 4, The Battle of the Labyrinth:

First, here’s what I know:

So there we go. I’ll be snagging a copy of the book soon, coming up with a new graphic in its honor, and, plunging ahead just as soon as I can!