Warning: This review WILL have spoilers. I came into this movie without knowing hardly anything about it (except, ya know, it’s GODZILLA), and I would’ve hated to have certain knowledge ahead of time. For those not wanting spoilers, I’ll just say that I really enjoyed it, it’s far, far better than the last time Americans made a Godzilla movie, and if you think it’s at all up your alley, I recommend you see it. Now go off and read some other non-spoilery stuff on this blog, like things about my upcoming book Zeus Is Dead!

For the rest of you, I’ll see you below the image… 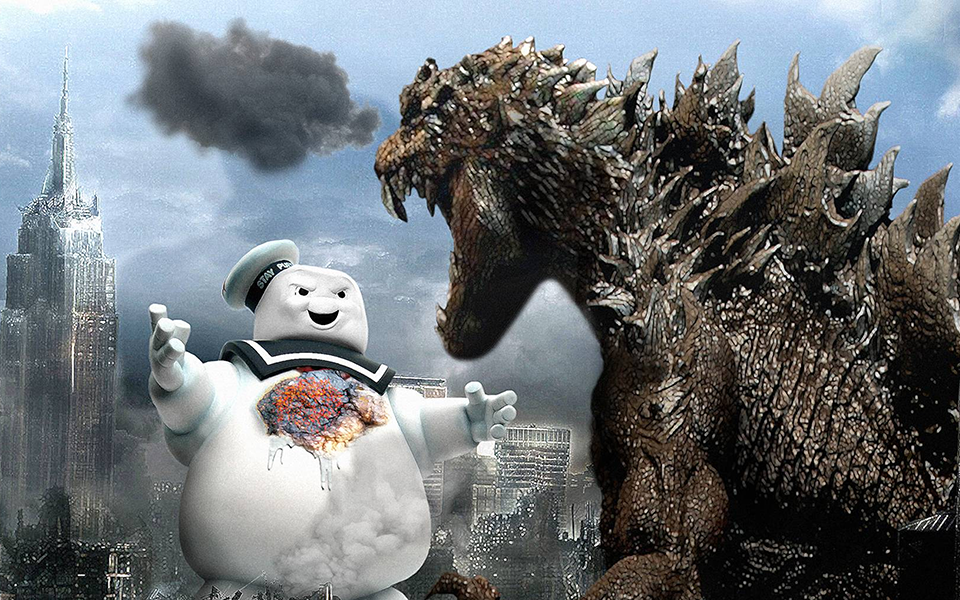 “When someone asks you if you’re a Godzilla, you say, ‘YES’!!”
Note: This did not actually happen in the movie.
Yet.

Okay, now that I’ve chased everyone away, let’s review. Er, no, wait. I’ll review, you sit there and read it. Or stand there and read it. Or view this on your iPhone while you’re scaling El Capitan–though you should really watch what you’re doing, and how’d you get service up there, anyway? 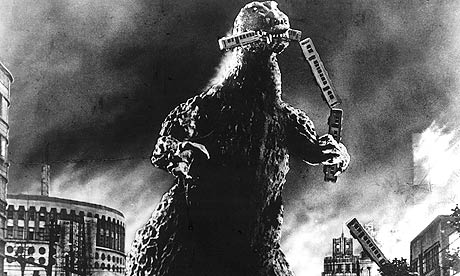 Warning: Public transportation may be high in trains-fats.

Admittedly, I’m no Godzilla expert. I know he’s destructive,  he breathes radioactive fire/lightning, he’s a metaphor for the atomic bomb, and he is (correct me on this if I’m wrong) arguably true neutral, since he’s sometimes helpful and sometimes not. He loves stomping on things, too, but which of us wouldn’t love to stampede through a city wrecking up the place if we could? (You can deny it, but you’re lying…)

My point here is that Godzilla aficionados might disagree with me when I say that this is a great movie, but I liked it. Not knowing what to expect going in, I thought it might just be the following:

I’m happy to say it was not. Godzilla’s kind of on our side? I didn’t know there were OTHER monsters in this movie until the MUTO in Japan woke up. Expecting Godzilla himself, it took me by surprise. It took me a few seconds to realize that this was something else rather than some alternate Godzilla design. (Giant iguanas, anyone?) Did anyone else think the MUTOs looked a bit like the Cloverfield monster crossed with a bat? This is not a criticism. The human characters–a vital element of movies like this but one that can go awry easily (when the world is ending, no one really gives a rip if you patch up your relationship with your estranged wife, 2012…)–were engaging. Their stories were intertwined with the main plot rather than just being alongside it. The story of Joe (Bryan Cranston) was especially engaging, and, for me, the perfect length. I was surprised when he died midway through the movie, but this allowed things to transition to the character’s son and keep the film from dwelling too long on a character arc that was developed enough.

It wasn’t perfect. I would have liked to have seen more of the earlier fights between Godzilla and the MUTOs. They were definitely teasing us by cutting away and showing only the aftermath or brief glimpses via new reports. That said, I suppose it’s fair to say that doing so did up the anticipation. The climactic scenes, like Godzilla’s breath, would likely not have been as effective if the movie hadn’t played things so close to the vest earlier. So, maybe, this isn’t even a bad thing.

And yes, I confess my favorite moment was the first time Godzilla breaks out the breath weapon. For a while I was worried they were going to leave that out entirely.

All giant lizard-like creatures should have breath weapons.

So did you see it? What’d you think? If there are Godzilla experts out there, I especially want to hear from you!