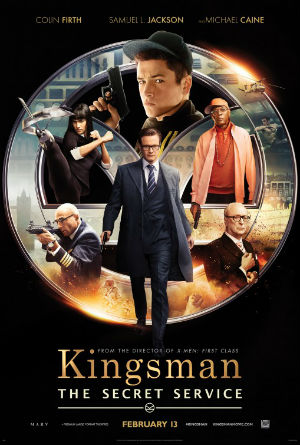 Look, if you have any sense of fun in you at all, just go see this movie.

WHAT DID I JUST WATCH?!?! Did this movie just– OH MY GOD!

That’s a summary of what went through my mind during much of Kingsman: The Secret Service, and I mean that in a very good way, because holy shit, this movie was fucking insane and I loved every single minute of it. SEE IT!

Oh, wait, you want more detail? You won’t take my word for it? I have to support my arguments? I see how it is. (Tossers.) Imagine a cross between the late-Connery/early-Moore James Bond era and Men in Black. This is a good old fashioned spy adventure hurled into the 21st century with cheek, style, and an utter joy in itself. Yet even with that joy–Kingsman never quite takes itself completely seriously–it holds an awesome story that will keep you engrossed with high stakes and incredible characters.

Also, exploding heads and R-rated violence. (Spy work is dangerous!) Oh, and a jaw-dropping “did this movie just DO that?!” scene where fictional version of the Westboro Baptist Church goes– Well. I don’t want to spoil that for you. But OH MY GOD. 😀 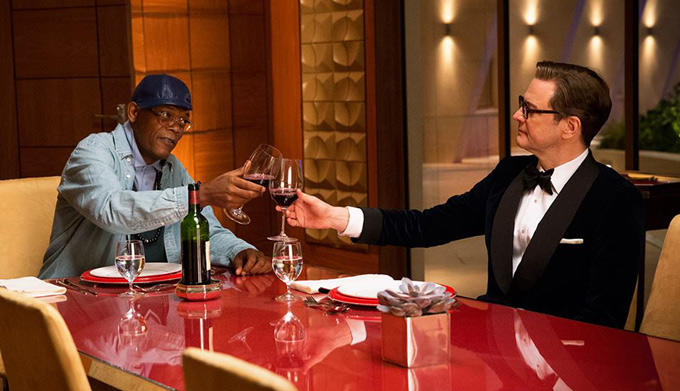 “Do you like spy movies, Mister DeVille?”
“Nowadays they’re all a little serious for my taste.”

Look, I LOVE this kind of stuff. When I was in junior high I got introduced to a p&p roleplaying game called Top Secret, S.I. where you act as an agent of “Orion,” a global, independent spy network doing its best to keep the world safe from madmen, chaos, and–of course–the sinister agents of W.E.B., a shadowy organization bent on sewing unrest in the world for fun and profit. There were secret bases hidden in the backs of shops, incredible gadgetry, and fiendish plots of world domination. It drew on everything from James Bond to Get Smart to Mission: Impossible. It was pure cloak & dagger adventure-fantasy indulgence, and it was awesome.

Definitely intended to invoke For Your Eyes Only…

“Okay, Michael, we get it. You liked it. But what’s the movie about?”

I’m glad you asked, helpful strawman reader! Kingsman taps into those same elements from the get-go, for the Kingsmen are like a smaller-scale Orion, sharpened to a fine edge (concealed in the toe an Oxford and dipped in poison). Secret bases? Check. Interesting gadgets? Yep. Striving to keep the world a better place? Of course. Extra touches like agent code names inspired by the Round Table–their leader is “Arthur” (Michael Caine) and their tech-wizard is “Merlin” (Mark Strong)–just add to the fun for Anglophiles like me.

Kingsman agent “Lancelot” has been killed in action trying to rescue a college professor (Mark Hamill–yes, Mark Hamill) who mysteriously turns up right where he should be the next day. Something nefarious is going on, and the Kingsmen have to figure out what it is while at the same time holding a series of recruitment tests to replace their fallen fellow. One of the candidates is Gary “Eggsy” Unwin (Taron Egerton), the son of a former Kingsman recruit who died after completing his training 17 years earlier, and of course one of the main characters of the story. 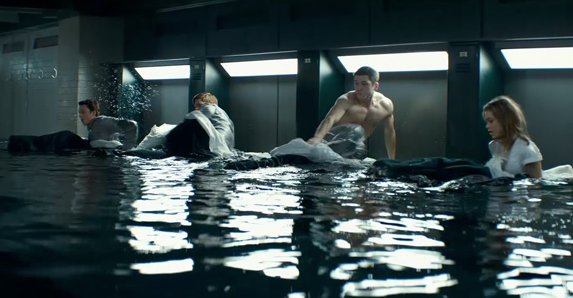 “Is this another training exercise or did Digby forget to turn off the faucet again?”

I really like that this movie it shows us the Kingsmen in action first before it brings in Eggsy, if only to break the usual pattern of how such stories are told. It grabs from the moment Sting sings out “I want my MTV…” in the opening credits action (yeah, I know Dire Straits did that song, but Sting sang that particular lyric), showing a Kingsman operation 17 years prior and gives us more about the Kingsmen with another in the present. By the time Eggsy gets his introduction to the organization, we’re not experiencing it on the same level. We know more–but not everything–and the movie gives us the fun of watching Eggsy see it. It’s like giving an awesome book to a friend and having the thrill of watching them discover it for the first time. In this way, we relate with not only Eggsy but also “Galahad” (Colin Firth), the Kingsman who recruits him.

But there’s so much more to talk about! Samuel L. Jackson gives us the megalomaniac Valentine, a classic spy movie villain with some interesting motives behind his plotting. And as you can’t have a classic spy movie without a henchman, we get Gazelle (Sofia Boutella), who–well, I can’t possibly describe it so well as Kingsman portrays it. Just find out. The plot itself had me guessing. It takes more than a few surprising turns (“This isn’t that kind of movie.”), which are made all the more visceral by how much Kingsman makes us feel for the characters.

There’s very little I didn’t like. I think the only non-white characters were the villains, though plenty of the bad guys were also white, so it’s not a strict dichotomy. A scene with a toddler locked in a bathroom was also difficult to watch (but in the same sense, very, very effective in conveying the horror of what was going on), so that’s not really a complaint so much as a warning. Mini-spoiler about that: The toddler makes it through unharmed. Though some therapy will likely be required…

I could spend pages on this movie, but I’ll spare you. But, really, if you like grandiose spy fiction that takes the concept and goes fucking wild in a nitro-injected, balls-out, gleeful joy using clever writing, excellent actors, and the occasional exploding head, go see Kingsman.