The third and final part of a series of posts about my first cosplay experience. Follow the links if you missed part one or part two…​

So I had my Imperial Naval Officer costume assembled. With Emerald City Comic Con fast approaching, I had a place to wear it. Yet before I could get there in all my newfound glory, I had to figure out how to deal with the one thing I’d more or less forgotten about when starting this whole endeavor:

As a guy who regularly wears pants (and in cooler months, a coat) with all of the pockets I need, it was something I never had to think about before. But as I mentioned in part 2, the pants for this cosplay had no pockets. Wearing my usual coat around would defeat the purpose of cosplay. So where was I going to put my wallet? My keys? A snack that I’ll surely want at some point while wandering through a convention hall filled with people?

I suddenly realized what those little toaster droids running around Imperial facilities are. Mobile pocket droids! (I mean, sure, they also deliver fresh Pop Tarts to the loyal servants of the Empire, but I’m sure officers must have a few of those suckers follow them around holding their stuff, right?) Not being blessed with such a droid, I went with a less high-tech solution.

I bet the admirals get TWO of these!

First, for things like cash, driver’s license, ATM card, etc, I turned to a solution that I’d already had in my closet from days of international travel. I took a flat pouch designed to be worn around the neck, beneath clothing, and slid it in between the flaps of the jacket. The high collar hid the neck strap, and I used some velcro inside to affix it right at the center of my chest. Now if I needed cash (or my driver’s license, God forbid, got pulled over while driving to the con in costume), I just undid one snap and slipped my hand inside. Plus it was flat enough to where it didn’t show on the outside of the jacket. 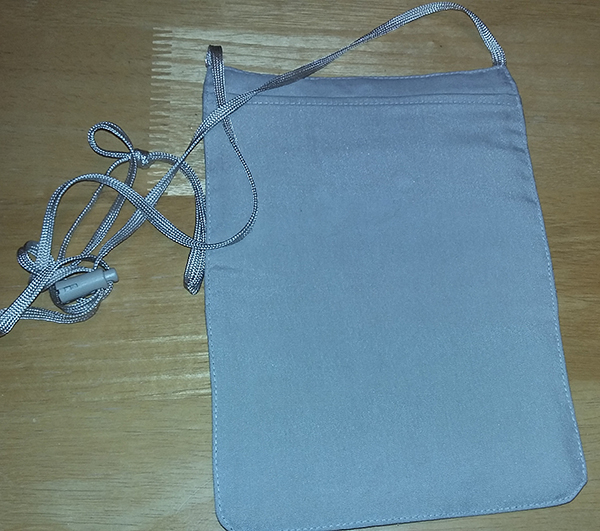 As for the keys and a snack, the hat turned out to be a treasure trove of discreet storage space. Those flaps? The one in the back was the perfect spot to hide a key fob. After securing the flap with velcro to keep it closed over the key, it wasn’t noticeable. Those hats also have some extra space in the top, especially if you don’t have any hair taking up space. You know what fits there perfectly? A CLIF bar, secured with tape, of course! 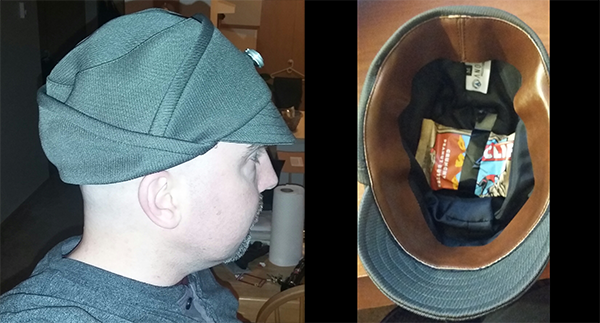 I like to think I’m not usually quite this pale when a camera flash isn’t going off right next to my skin.

Finally, since I didn’t want to have to always be carrying my phone in my hand, I snagged a little black belt pouch it could fit it. (The realization that such a thing could be useful came only two nights before the con. Fortunately it was cheap, and I was able to get Amazon to send it my way fast and free of shipping charges.)

It has a magnetic seal (so blasters are no good), but I added a tiny bit of velcro just for an audible alert if anyone did try to pull my phone out when I wasn’t looking.

But finally, the day came! I got everything on, got into the car, and drove to downtown Seattle, wondering at each stop light in my own neighborhood if anyone was looking closely at what drivers were wearing (and secretly hoping they were). Once I’d parked, got out of the car to get my hat, belt, phone pouch, and lightsaber properly attached, I headed through the convention parking garage, feeling honestly quite proud of how I looked. Before I even got out of the garage and into the con itself, I’d started getting compliments.

I met up with two friends there, Trisha and Ethan. While I spent a lot of time hanging out with them, I also spent a lot of time by myself, either attending a panel or two, or just, frankly, wandering looking at merchandise and gear while letting my cosplay be seen. 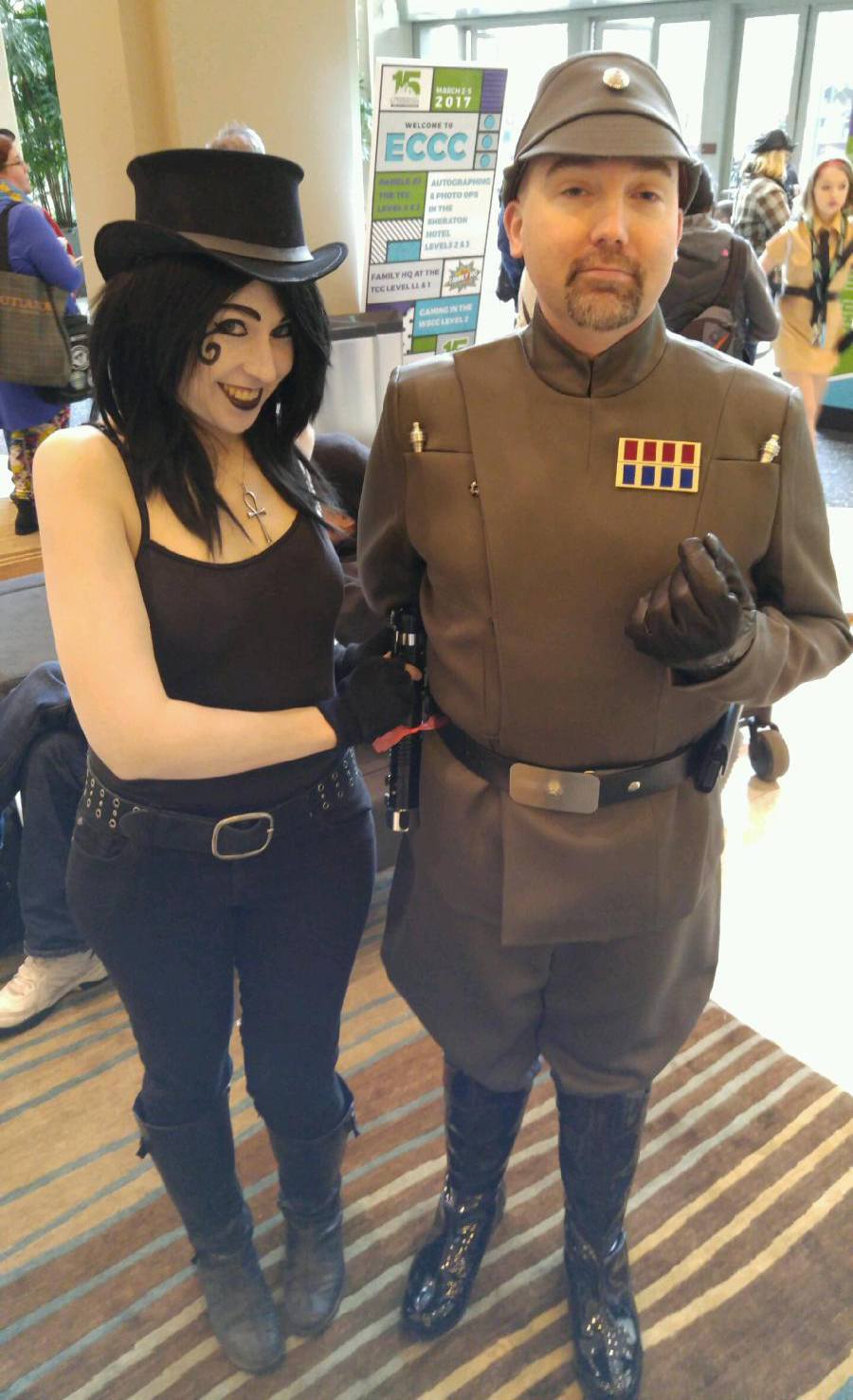 That’d be my friend Trisha going as Death from Neil Gaiman’s Sandman series. (Photo by Ethan, who came dressed as Ethan from the real life series.)

I’m not the best with crowds. While I can be outgoing when I have to be, I’m certainly on the introverted side of the spectrum. In the past, I never interacted much with strangers at cons, and always felt a little out of place. This time, things felt very different. People were coming up to me, complimenting my costume, talking to me about it, and asking to take pictures. The fact that I was effectively wearing my geekiness on the outside made it somehow much easier to be comfortable around others who were doing the same. 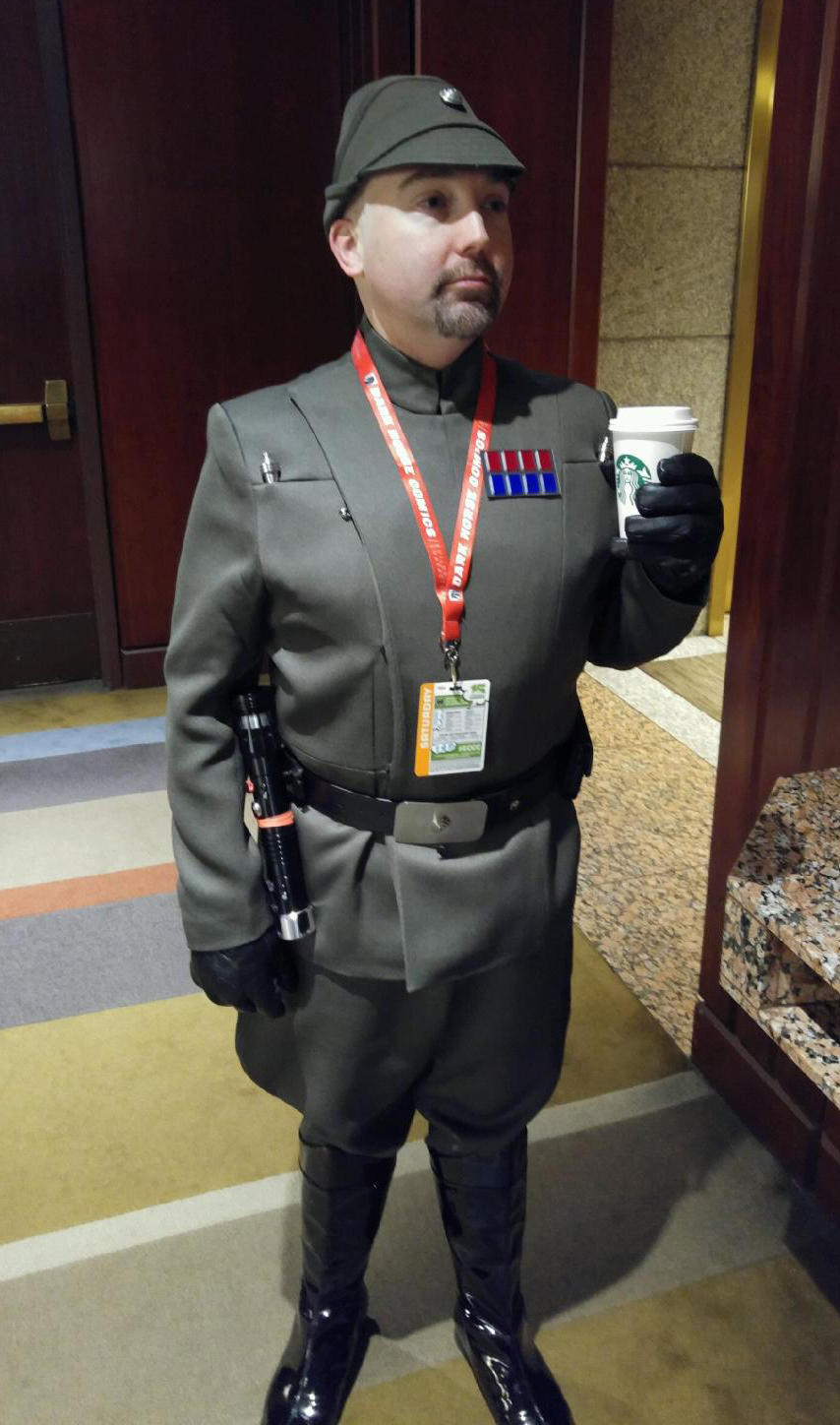 Stopping to pose in the Starbucks Death Star location…

Essentially, it was the best con experience I’ve ever had, and I can’t imagine NOT going to a con without a costume in the future. 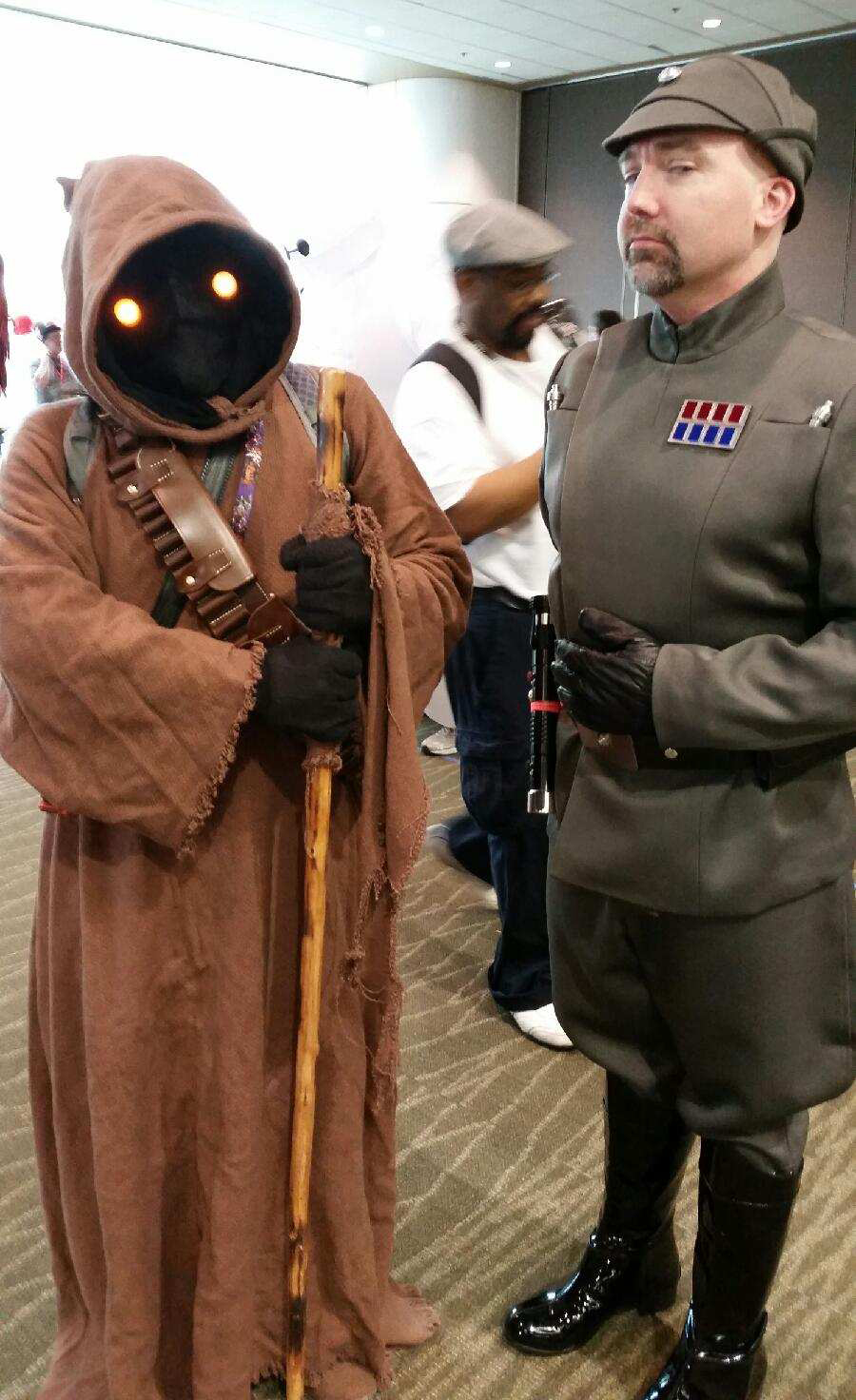 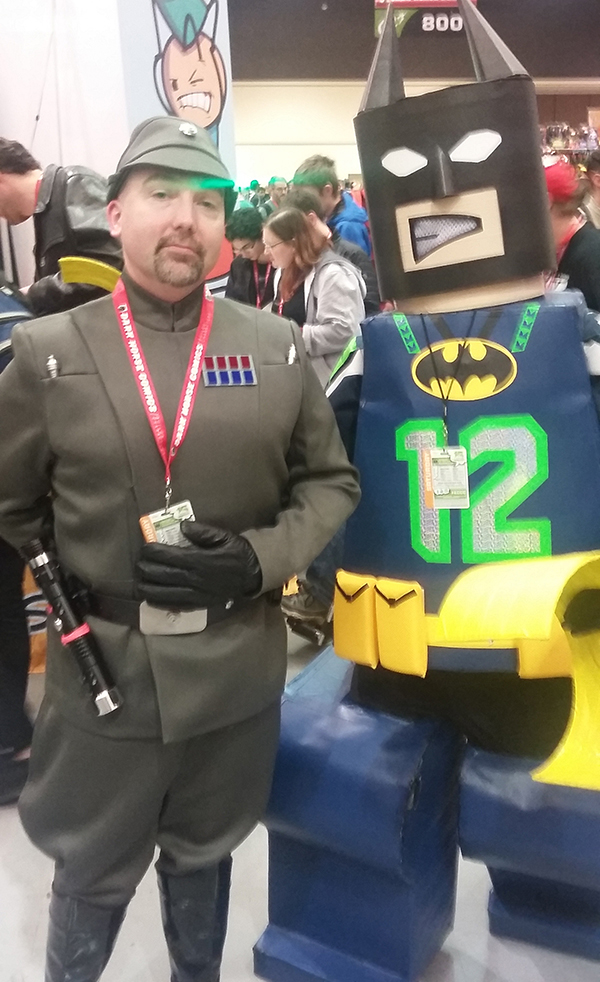 You’ll notice the little red ribbon tied around the lightsaber to mark it as safe. This puzzled me. It wasn’t a working lightsaber, after all.
Oh, also look! Lego Seahawks Batman! 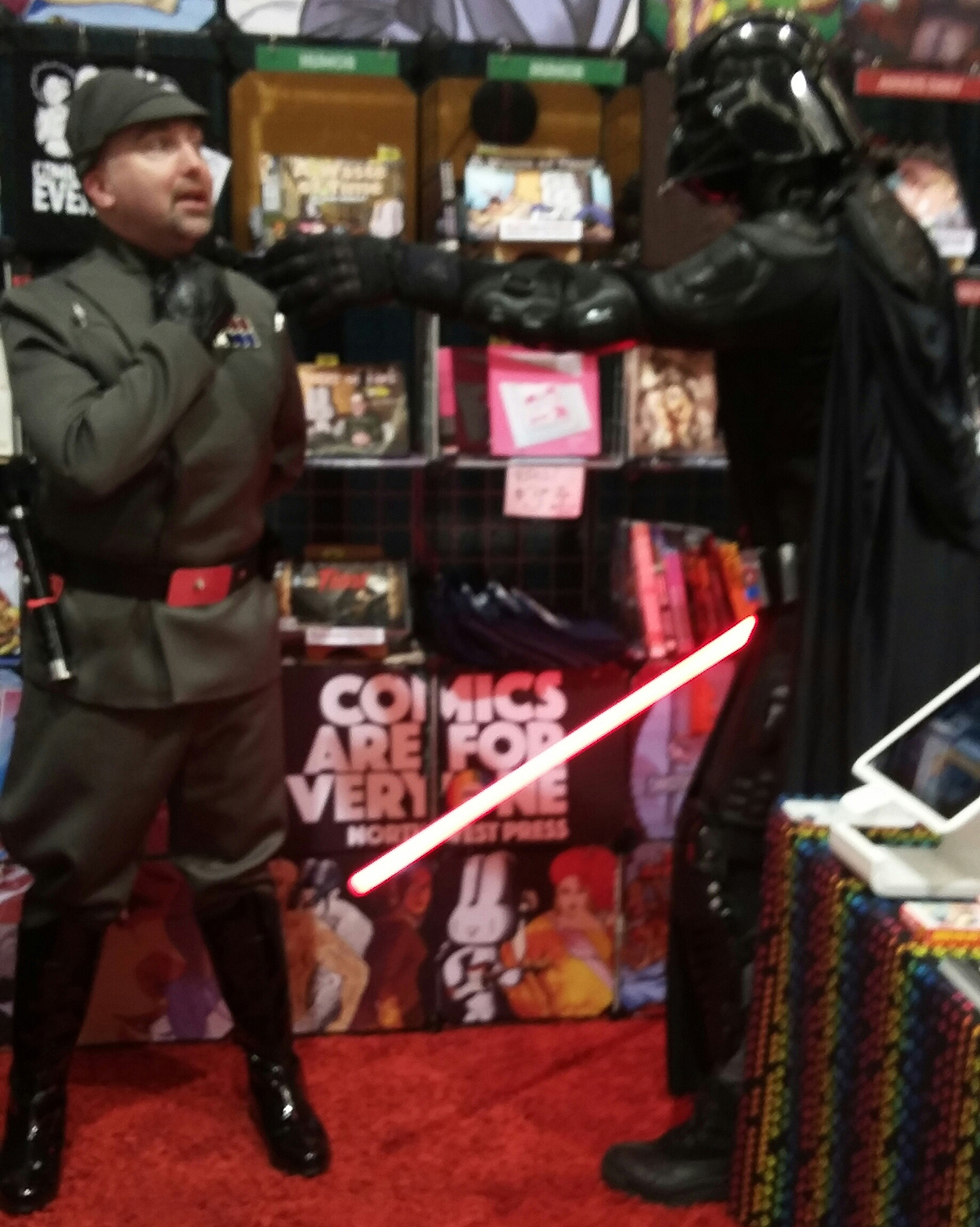 This photo was taken by Vader’s girlfriend, who was cosplaying Hera from Rebels. I really wish this hadn’t come out blurry, but it was still fun.

The storage worked well. My keys didn’t fall out, and the CLIF bar was put to good use. It was a little hard to use my phone to take pictures with those black gloves on, but it wasn’t a huge issue. The only downside was that after walking around for almost nine hours in those boots, my feet hated me. Even with the arch support insoles I put in there, the fit was less than ideal. Blisters and aches. I was very happy to get them off, and vowed to find a better pair. Foot comfort is not something to take lightly! 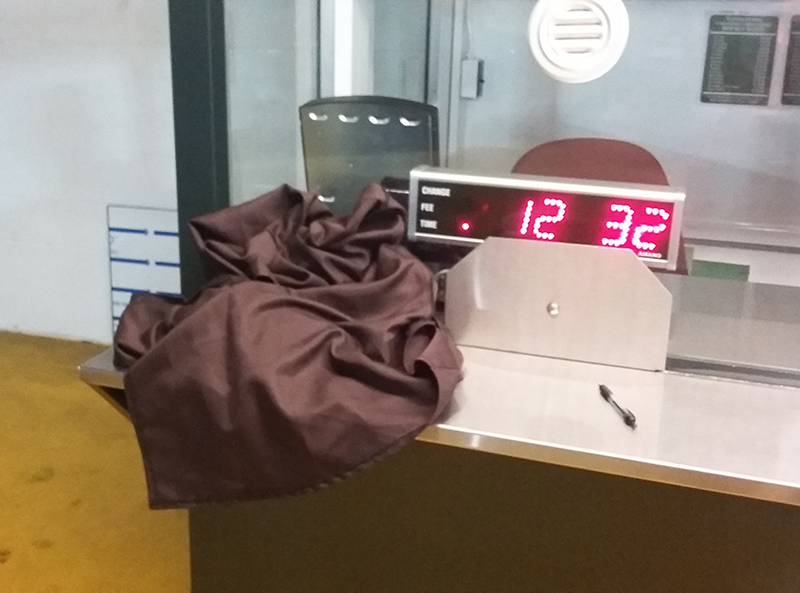 I also spotted this excellent Obi-Wan cosplay in the convention center parking garage!

I’m happy to say that I’ll be doing it all again at Norwescon in just a couple of weeks, this time with some correct Imperial code cylinders that I got my hands on, and (hopefully) new boots. Come by and say hi!

And maybe you’ll even get to see me in my Walter White/Breaking Bad getup. With no hair and a goatee, it’s a natural choice… 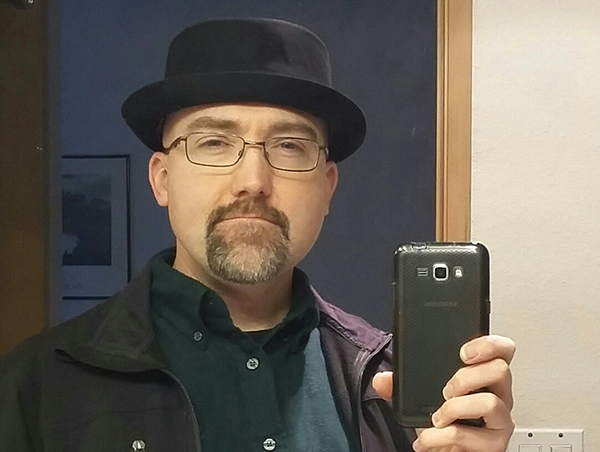 My regular glasses don’t quite work, and I need to get a better shirt, but the pork pie hat was cheap!