Rather than having a Guest Geek post up this week, I figured I’d do something weird and be my own guest! (It’s complicated. There are lots of forms, and I needed to apply to USCIS for a visa… You wouldn’t believe the paperwork.) I know, it’s terribly unusual. Just bare with me. This is something I’d written with the idea to submit to another blog, but I decided I’d just put it up here and cut out the middleman!

As you may know, I’m a lifetime geek who’s lived in Seattle since autumn 1992. Between then and last January, there were twenty-two occurrences of Norwescon, the Pacific Northwest’s premiere sci-fi/fantasy convention, and I’m ashamed to say that I missed every single one of them. Either I hadn’t heard of it, or each year I was reminded of its existence either as it was happening or a few days afterward. It was like the final episode of Farscape: “Bad Timing.”

That changed this year. Not only would I attend Norwescon for the first time, but I’d be doing it as an “attending professional” to speak on panels and read from my latest novel. This is the story of that experience. Or the abridged story, anyway. Four days is a lot to cover, after all. 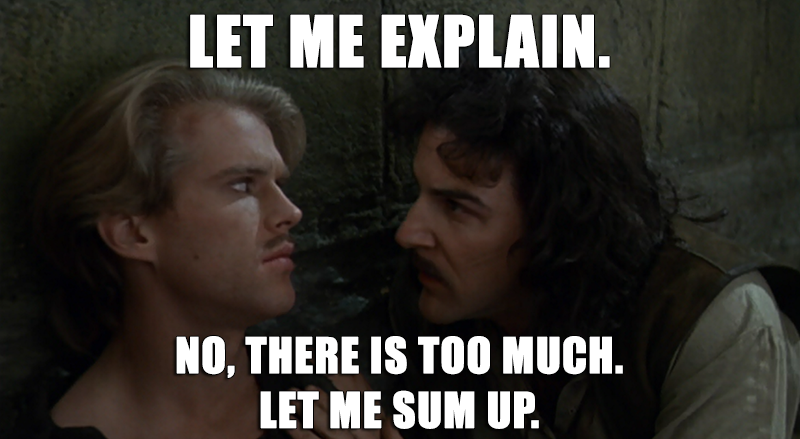 It all began last fall when I had the pleasure of appearing as a guest on the Seattle Geekly podcast to talk about the recent release of my comedic fantasy novel Zeus Is Dead: A Monstrously Inconvenient Adventure. I’d gone to the west Seattle home of Sharon and Matt, the couple who produced the ‘cast. As we chatted in their living room after the recording, Matt mentioned that he was involved in Norwescon programming, and how would I feel about being a panelist? Of course I jumped at the chance, and a couple of months after he’d put in a good word for me with the organizers, I got my official invitation.

Now I should mention here that I am not a person who is comfortable in crowds. I can handle them, yes, but crowds sap my energy, and there’s only so much I can take before I need to withdraw into some sort of cocoon, Fortress of Solitude, or Darth Vader-style hyperbaric chamber. Could I handle four days in the midst of a sea of people? “You’ll be fine,” I told myself. Crowds, yes, but crowds of geeks! These are my people! And if I needed a break, that’s what the hotel room was for, right? 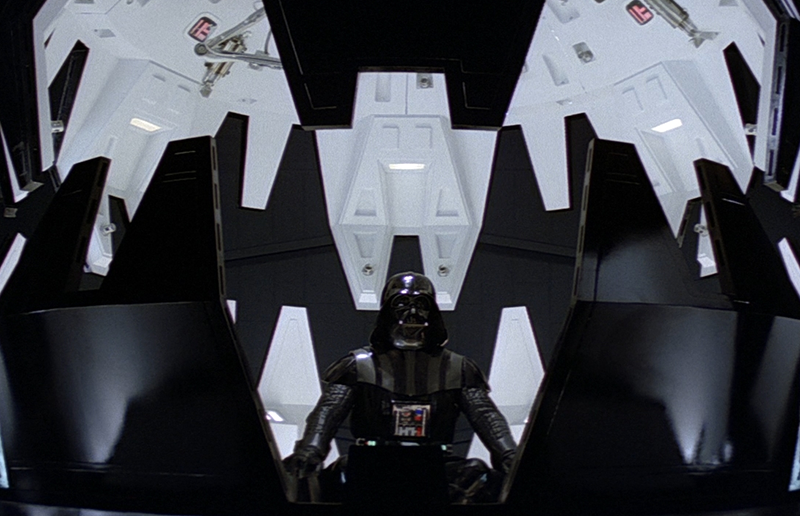 Anyone know where I can get a used one of these things in good condition?

I arrived Thursday evening, found my room, got set up with my panelist badge, and started wandering. With no panels I had to be on until Friday, I was free to roam. What struck me the most was how many elder-geeks were in attendance. I’m old enough to remember when Star Wars had no “Episode IV” attached to it, and yet I was younger than 80% of the people there. Many of them were dressed in costumes ranging from steampunk to Star Wars to George R. R. Martin. (Okay, so one of them WAS George R. R. Martin, but one thing at a time.) I saw one woman my mother’s age in a grand costume with huge purple wings, the origin of which I didn’t recognize. (No identification GeekPoints™ for me.) It was amazing, eye-opening testament to how broad geek culture truly is.

In subsequent days, the age demographic would widen toward the younger end, which I assume is related to how easily younger people are able to take time away from their jobs to attend or afford hotel rooms. 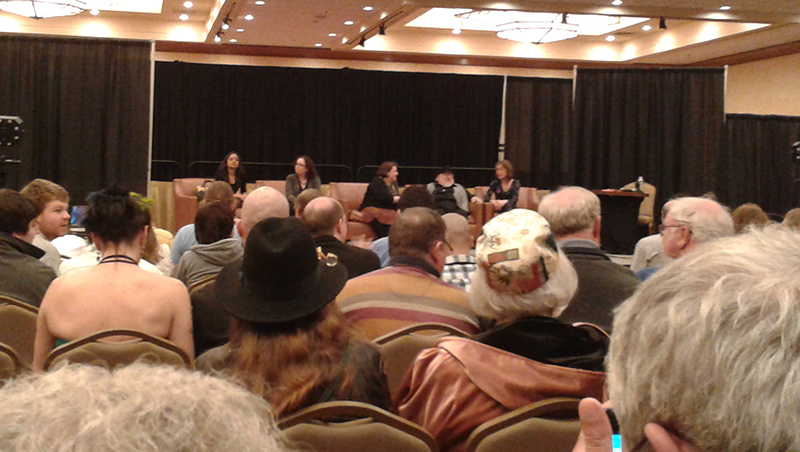 George R.R. Martin and the other guests of honor at the opening ceremonies.

Thursday I got acclimated. Friday morning I sat in the audience of a couple of panels, only partially able to focus, because Friday afternoon was showtime. For my first official panel I was all on my own: A reading from Zeus Is Dead. I’ve got a few public readings under my belt, and I’d practiced the sections I was going to read (including one particularly tricky cry of “jiggle-boom-fart-bounce-fart!” from the character of Thalia, the Muse of Comedy and Science Fiction…it makes sense in context). Yet I still get nervous beforehand. It was scheduled for 1pm, in the midst of a bunch of other excellent panels. What if I didn’t draw anyone? Thankfully, a banner outside the room, some pre-reading tweets, and free cookies drew enough of a little crowd where I didn’t feel foolish. The reading went great, I got a lot of (intended) laughs, and I even managed to sell some copies afterward. It’s a good feeling being surrounded by fellow geeks with an interest in what I’ve created.

Plus no one heckled me or ran off with the entire cookie platter.

My next challenge: serve on the Next-Gen Publishing panel. Now I’d have to actually sound intelligent without reading from a script. Interest for the panel was high, so they put us in one of the larger rooms. Seats yawned out before the raised dais on which I was to sit flanked by four of my indie- and self-published fellows. Again came the introverted panic: What if I don’t have anything important to say? What if I try to say something and it winds up coming out as incoherent babbling? What if my clothes suddenly vanish like in that recurring dream? Or worse yet— Well, have you ever seen Scanners? 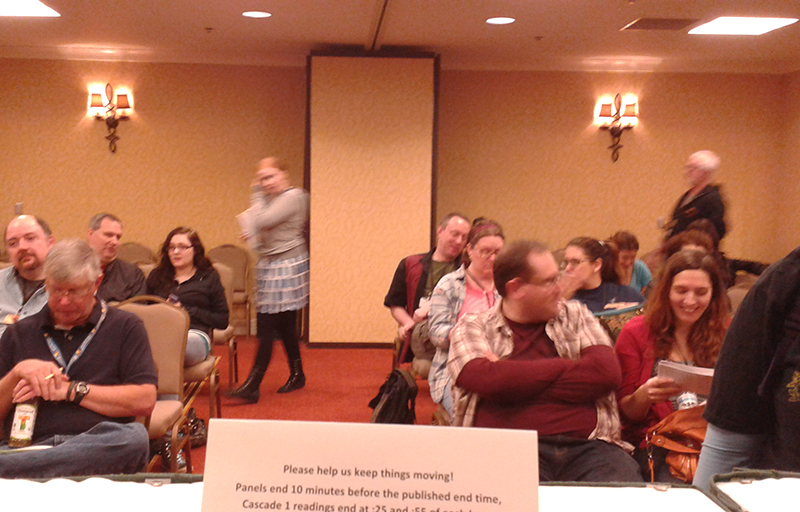 The audience begins to arrive. (Room represented in picture may be larger than it appears.)

Once the panel began, however, it was a wonderful experience. Between myself and my fellow panelists, I think we even managed to say intelligent and mostly useful things for the entire time. I talked about the concept of hybrid publishing without my head exploding. An audience member even came up to the table afterward to ask me some more questions, which bloomed into a conversation that we had to move out into the hall to allow the next panel to set up. My favorite part: He had a lot of questions about publishing, and not only did I realize I had enough experience to answer them, I got to be helpful! So often I forget that the things I know now are things I had to learn, and it felt great to be able to pass that knowledge onto someone else. And, yeah, I admit it feeds my ego, too.

The rest of Norwescon was a jumble of costumes, conversations with fellow geeks, authors, and gamers, appearing on three more panels, and hearing a behind-the-scenes ECCC story from the Seattle Geekly folks about a certain popular geek actor that I probably shouldn’t repeat here. 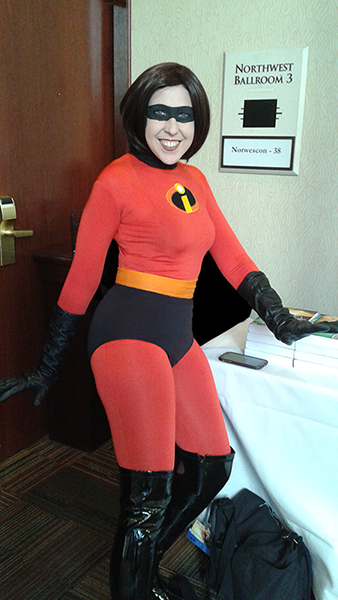 Cosplay: My friend Trisha in her ElastiGirl/Mrs. Incredible outfit.

Oh, and I had a close-encounter with George R. R. Martin in the panelist green room. I regret there’s not more of a story to that. I stopped into the panelists-only rest & refreshment room to find Martin sitting at a little table with a couple in their twenties who were clearly having the time of their lives. But there was no room for me to push in without being obnoxious. I settled down in a chair near to the table to listen for a few minutes before I had to rush off to my final panel of the con: The Geek Secret Handshake.

I didn’t stay much longer once my final panel ended. After four days, I needed a full home recharge. I missed the closing ceremonies by leaving early, but my con experience was already fantastic. I didn’t need the capper of an official closing. Plus I had a book to finish writing… 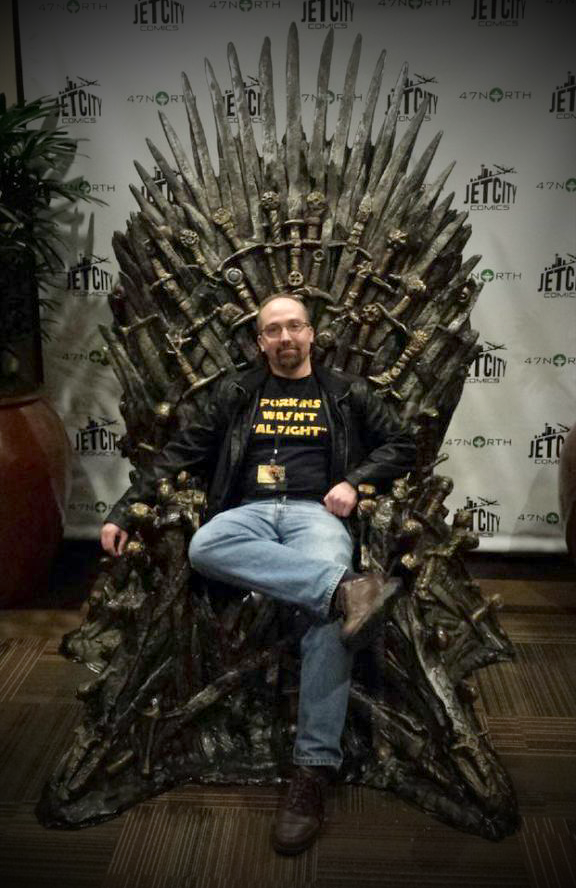