When the movie theater experience works, it works really well. Who doesn’t like sitting in the middle of a darkened theater in front of a massive spectacle of storytelling and visual awe, sharing the group experience with mostly total strangers amid incredible sound and the scent of popcorn? (Okay, I’m sure there are those who don’t enjoy that, but it’s meant as a rhetorical question. No need to name names.)

Yet we’ve all had the opposite experience, too. That guy wearing the British Royal Guard hat who sits down in front of you just as the movie starts. The little kid behind you who won’t stop kicking your seat. The horde of gremlins who break into the theater on Christmas Eve, carve up the screen, and keep checking their cell phones.

And then there just are those times when the Blob attacks. Total bummer, ya know?

Well, today I’m teaming up with a few other bloggers to tell you about my worst movie theater experience. Mine may be slightly different from theirs (find out more at the end of this entry), as it comes from the far reaches of my childhood. I must’ve been about six or seven, though I’m not entirely sure. But let me ask you this question:

Have you ever seen the 1978 animated film Watership Down? Based on the book by Richard Adams, it’s a tale of a warren of rabbits searching for a new home. Sounds adorable, right? Rabbits! BUNNIES! What six year old child wouldn’t love to see a bunch of cute bunnies cute-ing their way around the land in their cute little ways with fuzzy smiles and heartfelt themes of friendship and family? It’s got to be adorable, right?

Folks, this movie scared the living shit out of me. Bloody rabbits, viscous dogs, claustrophobic scenes of more bloody rabbits trapped in collapsing holes, squished together in a mad, deadly struggle to escape. And blood. (Did I mention the blood?) This video quite adequately sums up the experience in my sensitive young eyes…

This was the second movie I ever saw in a theater. (The first was Disney’s now permanently-vaulted Song of the South.) Imagine wide-eyed little Michael, sitting with his parents and older sister in the big, plush theater seats. His little feet, clad in Zips sneakers (they made you run faster!), swinging carefree in the air below. The lights go down. The screen begins to glow with magic, surely to release another wonderful animated experience! The bunnies are coming! And then… 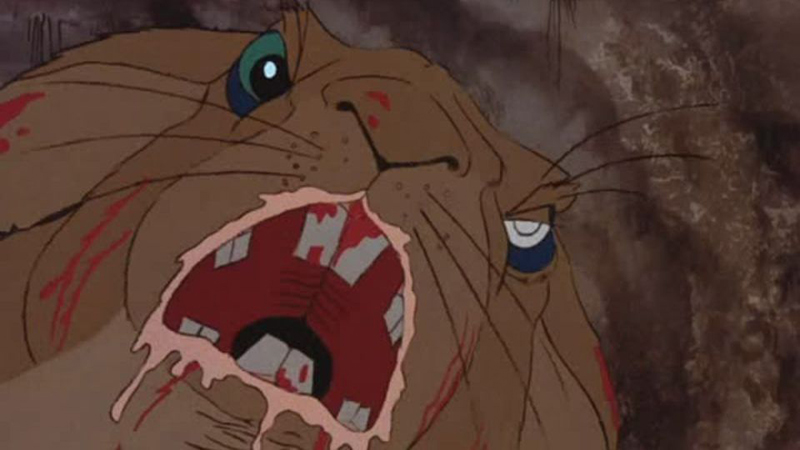 When I was a kid, if something bothered me, I wasn’t the type to just sit there and cry about it. Nope. I knew at an early age to remove myself from the situation. When I reached the point where I couldn’t take it any longer, I got up out of my seat and trotted up the aisle for the exit. Michael no like.

Now, my existing memory of what happened after that involves me wandering alone around the theater lobby, and exploring up the stairs to the theater balcony, which was actually empty and off limits. (A little velvet rope was no match for my crafty childhood ways.) Looking back on it I always figured hey, that was a different time, when kids could wander around unsupervised in public movie theaters without fear. But in preparation for writing this post, I did a little research, and asked my mom if she remembered this. She did.

Apparently my mom followed me out to the lobby and sat with me. I can recall a big white and red chess set that I think we must have played, and I can see the open lobby area with a gray carpet and plush red chairs. I don’t know just how I got up into the balcony, but I do have a clear memory of peering over the railing at the screen below. Meanwhile, my dad and sister remained in the theater. When Watership Down had ended, my mom and I went back inside.

Why, you ask? It was a double-feature! There was another movie coming! Back into the theater I went, eager to be able to watch something new, and happy the scary murder-rabbit flick was over. I settled back into my seat. The lights dimmed again. The screen glowed once more with promise! And up came a lovely little animated fantasy film about four cute friends on a journey to–

AAAHHH!!! AAAAAAHHH!!!! AAAAAAAAAHHHHH!!! WHAT THE FUCK IS THAT THING AND WHY ARE ITS EYES GLOWING?!?!

(Yep: Ralph Bakshi’s Lord of the Rings, in all its frightening, partially-incomplete rotoscoped glory.) My parents decided it was time to leave the theater after that. My mom tells me that my sister was NOT happy with me. I can’t say as I blame her. My sister, perhaps kindly, claims no memory of this.

I’m pleased to say that I’ve never had a worse experience than this in a theater. Granted, the time I sprained my ankle going to see The Lion King was probably a close second, but that’s another story…

And speaking of other stories, check out the worst theater experience stories of my fellow awesome bloggers Tiffany Pitts, Elise Stephens, and Camela Thompson!

And don’t forget to tell me about your own worst experience in the comments!