Since I tweet for humor, often with fantasy/sci-fi angles (gotta keep up with the “branding” to fit in with my books, don’tcha know), I sometimes seize on a particular concept I like and then run with it. Slogans for Soylent Green that tout its people content. Additional Asimov Laws of Robotics. #LittleKnownSciFiFacts (with “facts” used loosely).

Soylent Green: Now only made out of the *most delicious* people!

One of those concepts was putting some sci-fi references into the mouth of Pooh and Tigger. I like mixing things like that (as anyone who’s read Zeus Is Dead can tell you), so it seemed a good fit:

In this series, lines 1, 2, and 4 were always the same, with line 3 being something referencing sci-fi or fantasy. Well, somewhere along the way, I altered the formula a little and combined it with another thing I occasionally riff on: The “Darmok” episode of Star Trek: The Next Generation. If you haven’t seen it, “Darmok” involves the Enterprise meeting a race of aliens that communicate entirely in cultural metaphors. For example, if I wanted communicate the concept of astounding victory, I might say, “Michael Phelps at the 2016 Olympics.” For despairing anger, perhaps “Charleton Heston at the Statue of Liberty.” You get the idea. 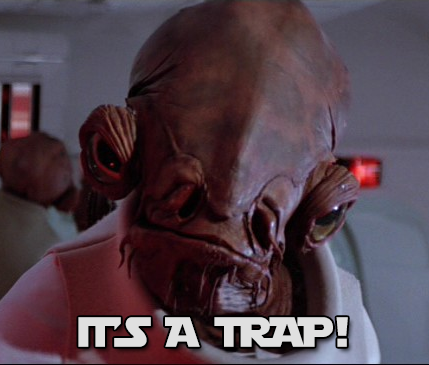 Ackbar, when the shield was still up.

So in “Darmok,” one of the big ones is the line “Darmok and Jalad at Tanagra.” In the context of the episode and the aliens’ culture, this means a meeting of two people from different cultures who face a beast, defeat it together, and grow closer in doing so. It’s basically what the aliens try in order to bring them and the Enterprise crew closer, with Captain Picard and the alien captain being transported to a planet to deal with a big ol’ monster thing–not that Picard understands this meaning at first. In the episode, another metaphor, “Shaka, when the walls fell,” is used to indicate a sad defeat. (Apparently some alien named Shaka didn’t have a very good day when some walls fell.) So, basically, that led to this tweet:

As you can see there, it exploded. I couldn’t believe how many retweets it got. Not only that, people were sharing it on Facebook and elsewhere. One person took the tweet and turned it into an image, which further went viral. People I knew were coming across it and kept telling me they were seeing it in various places. 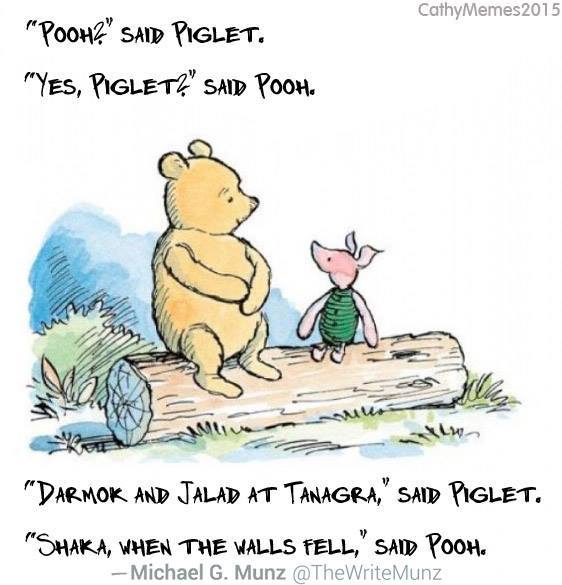 Then, for a long while, I didn’t hear much. Occasionally the above image would pop up (sometimes the version that didn’t credit me), and people would see it and tag me on it. It was still making the rounds, but not overly much. But on Saturday, it surfaced again, in quite the awesome way:

Cartoon: Pooh & Piglet at Tanagra. With thanks to Michael G. Munz @TheWriteMunz for tweet inspiration. pic.twitter.com/doxM4nwony

Lar (aka Lar DeSouza) had drawn his own version to go with it, complete with uniforms. And isn’t that freaking awesome?! It’s gotten loads of attention (and it’s even more awesome that he credited it back to me). Wil Wheaton even blogged it on his Tumblr. (Note to self: Figure out how Tumblr works.) I contacted Lar and he’s even going to end me a print of his drawing, so that’s doubly awesome.

Now if I could just figure out how to translate this into book sales, I’d be set. 😉