In my novel Zeus Is Dead: A Monstrously Inconvenient Adventure, I tackle the concept of Greek gods returning to the modern world, mining the concept for humor, adventure, satire, and general outrageous goofery. (Yeah, goofery is a word now. *flashes Creative License*) You may think it natural to assume that I have drawn inspiration from Rick Riordan’s Percy Jackson series, or that I’ve at least read it.

I’ve never read any of Riordan’s work. In fact, when I was about a quarter of the way through writing the first draft of ZID (this would’ve been, oh, 2009 sometime I think), completely thrilled with my concept, having a blast writing the book, and excited to get it in front of readers, my first encounter with Riordan’s novels occurred in a bookstore while on my way to the restroom during a writing session in their cafe. A display for the first book in the series leaped out at me, waggling its display-bum in my face and thrusting its existence upon me.

I just about had a heart attack at the thought that someone else had a similar idea and had already gotten it published. A few days later, when I looked it up to see just how similar our ideas were, I was relieved to find that Percy Jackson was written for a younger audience and appeared to be a wholly different sort of book than Zeus Is Dead, despite the whole “Greek gods are running around in the modern world” similarities. I relaxed, deciding its popularity could only help my own novel, and I eventually pitched ZID to agents and publishers as being something that would appeal to fans of the Percy Jackson series who had reached adulthood. (For the record, the seed of Zeus Is Dead, my short story “Playing With Hubris” in which a guy in a cafe meets someone claiming to be Apollo, was first published in 2002.)

I also decided to not read Riordan’s series, as I didn’t want to be influenced (consciously or otherwise) by his own vision of Greek mythology.

However, now that Zeus Is Dead is published and starting to gain some traction with readers, I don’t want to ignore the work of another author who clearly shares my love of Greek mythology. I’m curious to see what Riordan has done. So, having been recently introduced to the concept of online blogs of “               Reads                 ,” I figured hey, why don’t I take a look at the first book in the series and blog about it as I go?

I mean it’s not like I’m doing anything else lately, right? 😉 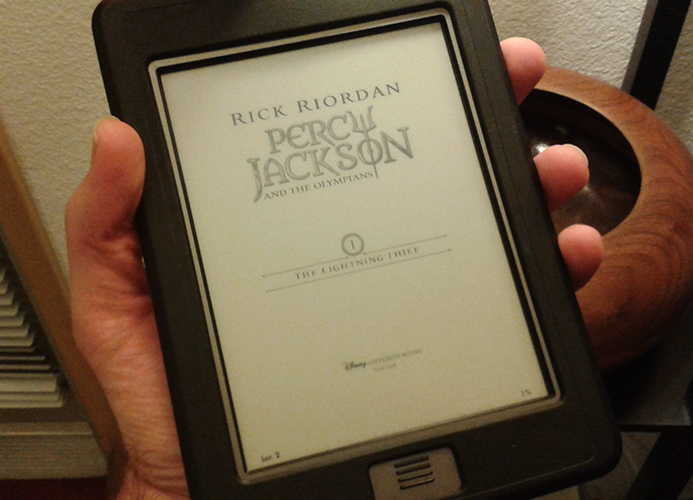 I’m not sure how long this will last, or how quickly I’ll be able to read it, but  I aim to do at least the first book. If I like that–and if I have time–I’ll likely try to do the entire series. So keep watching. I’ll begin tomorrow…