Long, long ago, in the before-time, I got my first computer. It was 1990, and on my birthday my parents presented me with a state-of-the-art PC. It had an Intel 286 chip that could run at the whopping speed of TWELVE MEGAHERTZ! That was fast, for the time. It had no mouse, because the operating system was text-based (MS-DOS). It had no hard drive, because the OS booted into RAM from a floppy disk. A 5.25″ floppy disk. The monitor? 14 inches of amber monochrome awesome! It had a word processor, but being a 15 year old boy, I primarily used it for games. 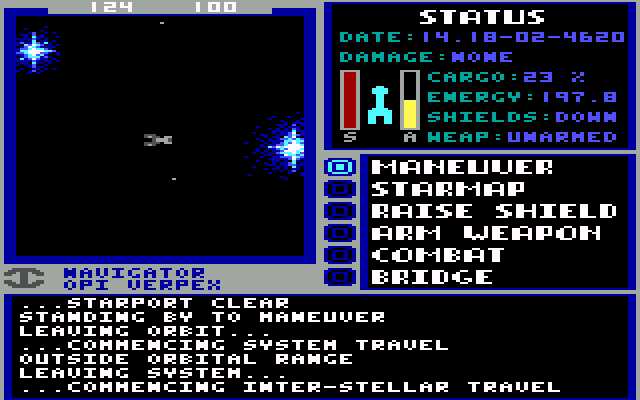 Starflight was like the original Star Trek: Not the best F/X, but engaging. Also: phasers & torpedos.

One of the first games I ever played was called Starflight. You guided a ship through an open-world galaxy, able to go to hundreds of stars and explore numerous planets that orbited them. You could search for minerals to sell, interesting life forms (also to sell), and discover weird artifacts that you could study…and then sell!

All this money could be used to upgrade your ship, train your crew, and better deal with the many alien races you meet, talk to, and–sometimes–do battle with. There was even an actual storyline to follow through, if you wanted. (Spoiler: It turned out the “endirium” fuel you were mining, selling, and using to run your FTL engines was sentient and causing suns to go nova in an attempt to stop you from accidental genocide.) 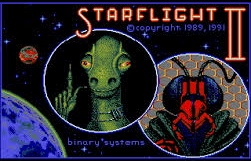 Even in monochrome, it was a great game. I eventually got a 16-color monitor (SIXTEEN COLORS! HOW CAN WE DEAL WITH THIS MUCH COLOR!!), and the sequel, Starflight II, which was even deeper. Unfortunately, due to the extremely limited graphics and interface, it really isn’t a game you can easily pick up and play nowadays, even if you can find a copy. 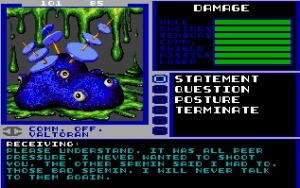 While rumors of Starflight 3 have surfaced off and on over the years, it never happened. I’m pretty sure Starflight influenced the Star Control series, but it wasn’t quite the same thing.  Yet today I ran into a trailer for a game due out in 2015 that made me think about Starflight again. It’s just a trailer, so I could be reading too much into it, but it struck me that if the Starflight series were remade, it might look something like this:

A look at the Rebel Galaxy website makes me even more interested, given the apparent similarities. From the site:

Rebel Galaxy is a swashbuckling space adventure, with action-packed combat, exploration, discovery, trade, and “negotiation” with the outlandish denizens at the edge of the known universe.

As the commander of an immensely powerful star destroyer, you’ll battle pirates, explore anomalies, befriend aliens, scavenge battle wreckage, mine asteroids, and discover artifacts. Choose your path as a roguish do-gooder, crafty space-trader or power-hungry privateer – or maybe a little of each! Buy larger and more powerful craft with your hard-earned credits, and outfit them with a variety of wicked weapons and defenses. Set in a galaxy of fantastic sights, and secrets to be found, Rebel Galaxy is above all a space epic of adventure, exploration, and combat.

It doesn’t say exactly when in 2015 will be out, but I’ll be keeping my eye on this one. What’s more, the developer, Double Damage Games, appears to be based in Seattle!