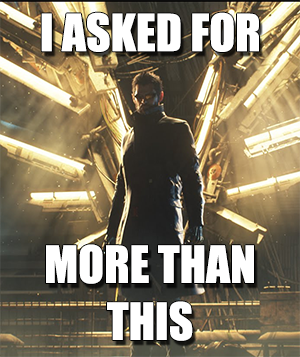 So I’ve now completed Deus Ex: Mankind Divided after my review post two days ago. Remember how I said that, judging by the story so far at that point, I guessed I was maybe a third of the way in? I guessed wrong, and everything is suddenly so unsatisfying.

My “probably one third in” point turned out to be three quarters in. My amazement at how much larger the game hubs were compared to Human Revolution based on what I’d seen in Prague? That’s because Prague is the ONLY hub. My judgment based on the developments of the story? That’s because the story just stops!

Okay, so there is some closure, yes. A villain is dispatched at the climax of the game’s only boss fight (not that I require boss fights, but in this case it’s a good metric for comparison between this and HR), and the plot he’s trying to execute is thwarted. But there’s so much left unanswered, undeveloped, and unexplored. It’s not a case of parts of the game being left on the cutting room floor. The way the game wraps up, with a “we have to get to the bottom of all of this stuff!” and a mid-credits cutscene, it’s clear there is more to come in successive games. But geez, it makes the whole thing feel so unfinished. 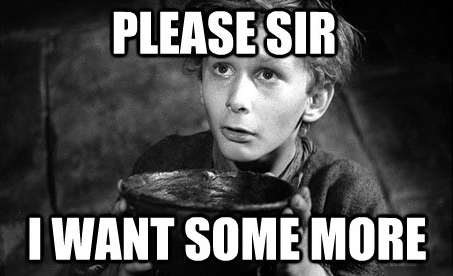 Me, when the Mankind Divided credits rolled…

For comparison, imagine if the original Deus Ex had ended before you went to Paris. Heck, imagine of Human Revolution had ended, say, before you returned to Hengsha. Haven’t played those games? Then imagine if The Force Awakens ended when Leia first shows up. (Haven’t seen The Force Awakens? I can only assume you’re reading my blog on accident.) I’m okay with a little sequel-bait, but there’s a line where it becomes too much, and there’s not enough pay-off.

I didn’t even realize I was AT the end-game. There’d been so little escalation in terms of enemies. Even after I managed to take out the big-bad (who I’d thought was just the medium-bad), I didn’t realize the game was over. Then the post-fight cutscene just kept going. Then the story advanced a week later. A character was saying, “It’s over, we’ve won.” I was still in denial. It wasn’t until the ending Steam achievement popped up and the credits started to roll that I finally believed it. (Okay, so I was pretty sure at the “we’ve won” part, but, like I said, denial.)

So I’m revising my previous review: If you’re a fan of the gameplay and you just can’t wait, go ahead and pick this one up, I suppose. But be aware that the rug will be pulled out from under you at one point. Otherwise, wait for a sale, or even until the (hopefully large, but I’m not holding my breath) expansions come out.

Even Invisible War had a longer story than this, didn’t it?

Okay, so maybe I’m being just a little melodramatic here. At least I have more time to play other games I want to play, right?
Oh, and probably try to write some more books. I should really do that, too.