From Goodreads: My review of Cain S. Latrani’s insane comedic fantasy, The Kingdom… 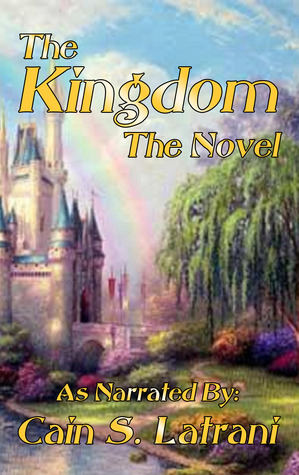 The Kingdom by Cain S. Latrani

If I may borrow from Forrest Gump (and that shows you how old *I* am), this book is like a box of chocolates: you never know what you’re gonna get. Each chapter of The Kingdom is a short story making up the larger whole, and each story contains things that are:

Also like a box of chocolates, it is not to be devoured in one sitting unless you want to make yourself sick. This book is best read a chapter at a time, with a few days in between to catch your breath.

The Kingdom is really more of a short story collection than a novel. The individual chapters, with a few exceptions, do not typically connect with the others save for a few references, recurring characters, and the ever-increasing friction between the long-suffering protagonist Princess Norma and the book’s narrator. Indeed, one of the book’s most powerful ways of making the reader identify with Norma is the shared urge to slap that narrator. Repeatedly. With some manner of very solidly frozen object.

The plot seems to have all the coherence of the last five minutes of Monty Python and the Holy Grail. This appears to be entirely by the author’s design, however, so I’ve no qualms about pointing it out. In fact, the narrative—and the narrator—revel in this incoherence. I’d go so far as to say that, as a novel, The Kingdom enjoys dangling the promise of a plot in front of the reader much in the way the deep-sea anglerfish enjoys dangling that glowy bait-whatsit in front of fish that it intends to devour. It’s clear that Cain S. Latrani had a HELL of a lot of fun writing The Kingdom.

Perhaps he had a little TOO much fun, but that’s really not for me to say. (I once spent an entire college quarter filming a movie that was a cross between Terminator and Spies Like Us, so I suppose that I can’t really throw stones.)

There a lot of books in this world, and The Kingdom is certainly one of them. This is—and I cannot stress this enough—a book that is unafraid to take risks, for good or ill. It took enough risks to make me truly laugh out loud on multiple occasions, so if you’re up for an adventure (and have a high tolerance for narrative absurdity and puns), I say go ahead and take a risk on it.