Last night I had the opportunity to see a sneak preview of the Robocop remake (to be released February 12th, 2014) here in Seattle. My reaction? 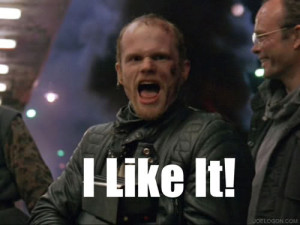 Okay, so I suppose I should elaborate. I’m a fan of the original. While not the best movie in the entire world ever, one cannot deny that the original most definitely has character, owing primarily to Verhoeven’s direction and many actor performances (including 3 Twin Peaks alumni). It made its mark on sci-fi culture, reflecting and informing the cyberpunk sub-genre and engraving upon geek consciousness phrases like “Dead or alive, you’re coming with me!”, “Can you fly, Bobby?”, and of course, “I’d buy that for a dollar!”

I’m not normally a fan of remakes. At the moment, I can’t think of any remake that wasn’t less enjoyable than the original; most seem pale imitations with no reason for being beyond cashing in on nostalgia. The new Robocop is the exception. It pays appropriate homage to the original, but it does not attempt to ape it. The new version is its own movie, its own interpretation, with its own reason for being. While the original is a product of the late 1980s in its satirical themes of corporate corruption and the “me-generation,” the remake reflects today’s culture in both the presentation of Omnicorp (Michael Keaton’s character feels to me very much like an evil Steve Jobs) and the theme of unmanned drones. It doesn’t have the satirical bite that the original did, but what would be the point of making the same movie in Verhoeven’s style without Verhoeven? (That’s what Robocop 2 and 3 attempted, and you know how THAT turned out. Good God, Robocop 3. *shudders*)

In many ways it’s actually more thoughtful, more cerebral, than the original. It’s not afraid to take time for emotional beats or to do what sci-fi can really do well: take a look at the human condition from another angle. This isn’t a movie you “turn off your brain” for. I suspect, had I seen it before writing A Memory in the Black, it would have influenced some of the ideas I explored in that book.

Don’t get me wrong, it’s got plenty of action, too. This is Robocop, after all. Action scenes are engaging and exciting without falling victim to the hated (at least by me) “shaky-cam” convention. The filmmakers can do things with (multiple) ED-209s that just couldn’t be done in the original. It’s PG-13, yes, but unless you absolutely need nudity and blood-festooned carnage on screen in all your movies, it doesn’t suffer for it. It’s not without graphic images, but they’re graphic in a different sort of way. And heck, the opening scene had me surprised that it WASN’T rated R. Also, Samuel L. Jackson does manage to get a “motherfucking” in there.

So how different is it, plot-wise? Like I said, it doesn’t try to ape the original. It takes the original’s premise, respects it, and finds its own way to tell the story. After seeing the trailers, I had certain expectations with how some things were going to go, but the trailers are, in some ways, deceiving. I was pleasantly surprised by many things, though I won’t go into detail here, so as to avoid spoilers. There’s a great scene about, oh, a third of the way in that made me gasp. That was the point when I completely put my faith in the film to execute itself in a worthy fashion. (If you’re curious, it’s the scene when the doctor brings the mirror up.)

If you’re at all curious about this movie, go see it. It doesn’t try to replace the original. They’re sci-fi movies of a different flavor: both good, just different. Plus, it’s got Samuel L. Jackson, Jackie Earle Haley, Gary Oldman, Michael Keaton, and a woman I recognized from the police station siege during I think it was season 3 of Supernatural. (Sadly, no Twin Peaks actors.)

Not worried about semi-minor spoilers? Here’s a quick rundown of some of the homages/differences that I can remember:

Some things still the same:
The lead is still named Alex Murphy, his partner’s name is still Lewis (but Lewis is a  guy), there are ED-209s, and a media figure still helps to frame the story. Robocop still has a good solid weight to him. The sound effects for his movement were not disappointing. There’s a definite homage to the drug factory from the original. Oh! And they used the original Robocop theme! (I was pleased.)

Some things slightly changed:
Robocop’s creator (Gary Oldman) is Dennett Norton rather than Bob Morton. OCP is now Omnicorp, but OCP is Omnicorp’s parent company. The ED-209 is already functional and out in the world (but legally bound from being deployed in the U.S.) at the start. Robocop himself is a little slimmer and SOMETIMES painted black. It’s a car bomb that gets Murphy rather than massive repeated gunshot wounds. Directive 4’s concept is still there, but it takes a slightly different form in a way that worked well for me. Oh, and I think we do briefly see the old Robocop design at one point on a screen, but I’d need to see it again to be sure.

Major changes (I still don’t want to list major spoilers so I’ll only list a few):
The plot itself is different in ways I won’t go into. No direct Dick Jones equivalent, The criminal bad guy isn’t named Boddicker. (Side note: I think he stole Brad Dourif’s eyes.) Robocop’s creator is a different sort of guy from the original. No toxic waste, Cobra Assault Cannons, or gunshot wounds to the crotch. Still plenty of excellent scenes of Robocop, er, robocopping, though.

Oh, and as for certain catch phrases:
“Dead or alive, you’re coming with me!” – It’s in the movie, but with a different context. Mostly works.
“Can you fly, Bobby?” – Nope.
“Stay out of trouble.” – I’m not actually sure on this one, but I don’t remember it.
“I’d buy that for a dollar!” – At one point a character says, “I wouldn’t buy that for a dollar!” And you know what? It works perfectly. Though there’s no Bixby Snyder.