That’s right, I’ve made what’s arguably my geekiest purchase ever: I now own a lightsaber. Or, at least, a reasonably convincing facsimile of one. I’m sorry to say that it will not actually slice through walls, speeder bikes, or tauntauns. On the other hand, given how often I accidentally cut myself with mundane items, that’s probably for the best. Still, this sucker could probably break a bone or two if swung hard enough, so it may still be ideal for home defense. 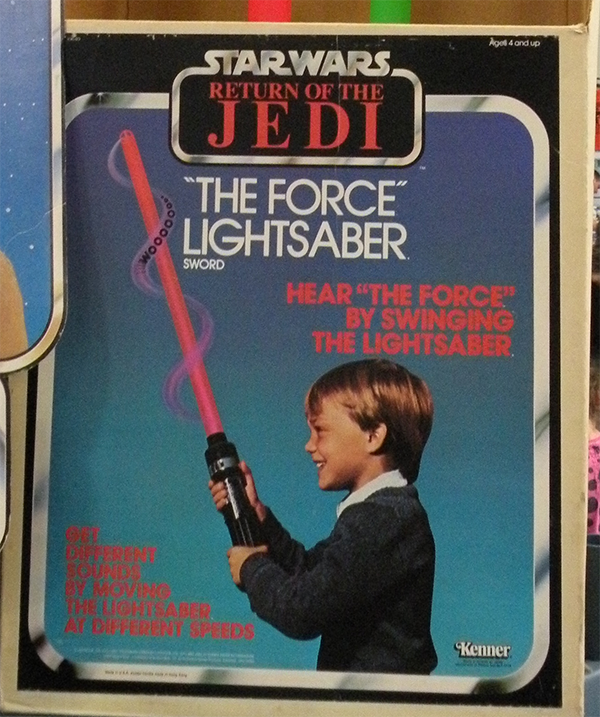 Anyone remember these things? They were sold in grocery stores, even!

I first saw Star Wars in the theater at the age of (I think) eight years old when it was re-released in theaters sometime between the release of The Empire Strikes Back and Return of the Jedi. From the get-go, I wanted a toy lightsaber (or, let’s be honest, an actual one). My parents either couldn’t afford the ones they had back in the early 80s or–and I suspect this might be the more likely case–they didn’t want an eight-year old running around the house with a giant, noisy plastic bat swinging at things. Or at his sister. I really can’t blame them.

Well, with the new movies, and my status as a grown-ass man with an income and decreasing willpower, I finally just said screw it: I’d at least look into getting one. There was surely a world of lightsabers out there both official and otherwise, so as with any big purchase, I started researching options online. I figured it’d be fun to learn more about this particular niche of geekdom, even if I wound up deciding not to buy.

First stop? The Google. (The kids love the Google. And I’m an excellent use-Google-izer.) I ran across an article that gave a run-down of some of the major options from the toys to the actual movie props. (Got a spare $240,000?) Granted, it was from late 2014, but was still quite helpful. Force FX, UltraSabers, ParksSabers, and more. More Googling showed me other options, like SaberForge and Vader’s Vault. So many sabers, so many options, so many prices. So much to research and imagine! Lightsaber technology (such as it is) had come a long way from the plastic woowoo tubes of my childhood. Bright LED technology. Onboard sound options. Blades able to stand up to light to medium contact, or heavier dueling blades more likely to break an arm than than shatter themselves. Even–and this was my favorite–a myriad of hilt designs with enough weight to them to appear anything but a toy. After all, if I was going to spend money on a lightsaber, I was going to get one that looked cool.

As it usually does with me the act of researching built momentum that made me more excited until, finally, the last vestiges of my hesitation crumbled and I knew that I’d be making a purchase.

I decided on a particular saber source: Ultrasabers. Their sabers looked and sounded great. Their construction time for an order looked reasonable, and faster than some. They had a myriad of options, good reviews, and–and this was more of a deciding factor than I should probably admit–their website was both detailed and easy to use. Their prices ran anywhere from about $75 to over $400, depending on options and designs. All I needed to do was decide what I wanted.

This was easier said than done. All of those options I mentioned? I was momentarily paralyzed by having to choose between them. (There’s a reason my Top 5 lists all contain more than five items. I’m terrible at picking favorites.) Aside from the obvious choices of blade color and hilt design, there was also the question of battery type, blade strength (light dueling? heavy dueling?), type of activation switch, “lite” audio or the full premium audio, whether I wanted the blade to flash when it hit something (a.k.a. “flash on clash”), and if I wanted a display stand. Okay, so the stand wasn’t too hard of a decision. 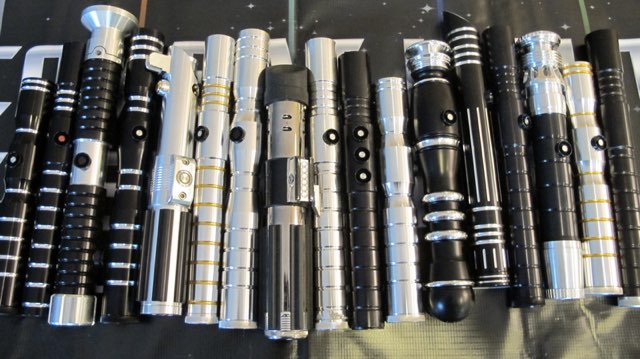 Just a few of the options, for starters…

I also had to figure out if I wanted one that let me change the blade color myself. I’d be able to hook it up to my computer and design the blade color (and create a pulse effect) with RGB sliders. I could then have a blade in pretty much any color I wanted, able to be changed at whim. Of course, these are also some of the most expensive models. Was it worth it?

Before I go on here I should probably explain a little about how these suckers light up. Do you know? Because I didn’t when I started. I’d assumed there were lights running the length of the blade, but that doesn’t seem to be the case–at least not with UltraSabers. The light itself comes from powerful LEDs in the hilt, which shine into a blade designed to reflect the light outward. The nice thing about this is that replacement blades are relatively cheap. If you want to switch between blade types for dueling or cosplaying purposes (or if you wind up breaking one), it’s a pretty easy swap-out. 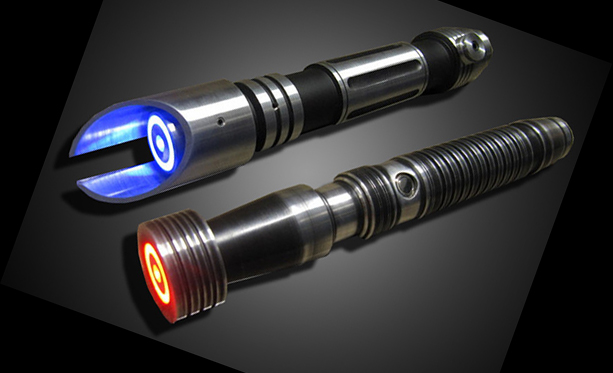 I started with choosing the hilt, and going from there. I wanted something that looked like more than just a fancy cylinder. I wanted character! Style! Nifty little protrude-y-bits! After looking at assorted available designs, I found myself gravitating toward a hilt based off of Vader’s. With the slanted emitter shroud, activation box, and various other touches along the black & silver design, it felt right. It also measured about eleven inches: a good size without being too unwieldy. 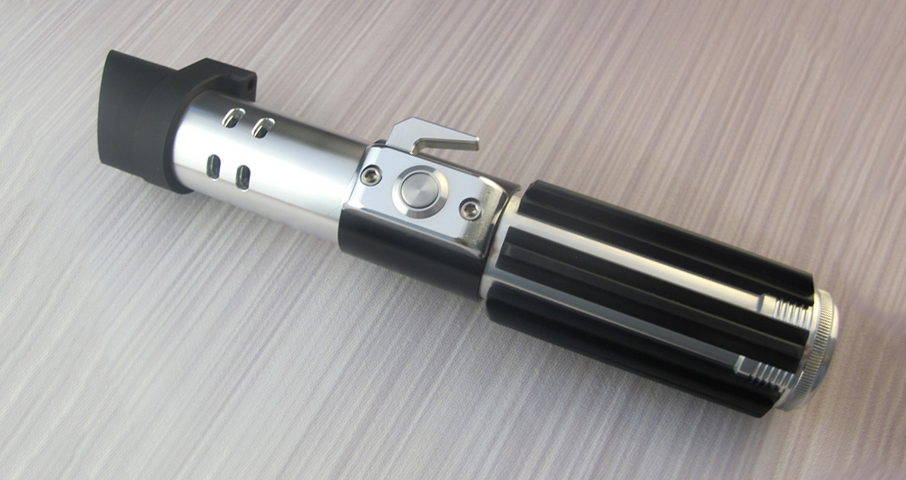 The Vader-based, “Chosen One” design. I was going to switch the activation box to black and probably go with a blue blade.

The problem was that because of the recent holiday season and the fact that the first Star Wars movie in ten years had just hit the theaters, demand for sabers was huge. A lot of the sabers were out of stock, including this one. (Only Anakin’s/Luke’s/Rey’s saber is more popular, from what I could tell.) At first I was going to wait, but they projected 12-14 weeks for it to become available again, and apparently I’m not a patient man.

I Am Altering the Saber. Pray I Don’t Alter It Any Further…

So I looked at what was in stock, and eventually found something else that caught my eye. It wasn’t quite as iconic as the Chosen One, but still had some flair of its own, which I could always punch up a little bit more by swapping out the pommel. (Some sabers are what’s called “MHS compatible.” The MHS stands for “modular hilt system,” and means you can easily switch out certain parts like the emitter, pommel, and even LEDs for others.) Not all of UltraSabers’ designs are based on the movies of course, but this one turned out to be based on Darth Maul’s double-bladed saber, but of course in a single hilt design… 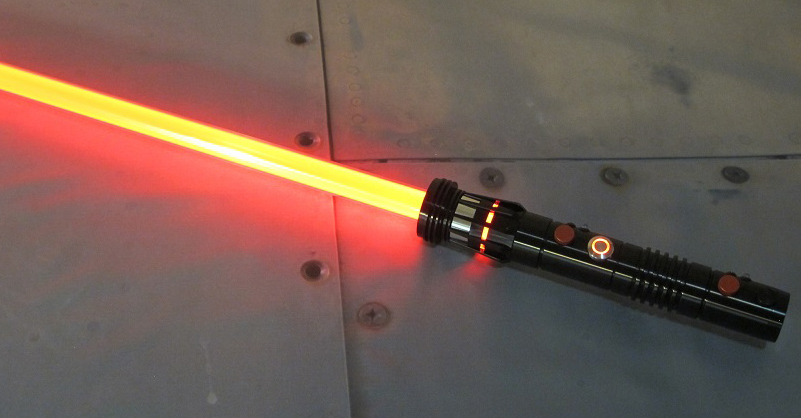 This is the base model. I got a fancier pommel, changed around the colors on the little jewel/screws, and went with a non-illuminated button. And, of course, a blue blade that I added a little extra juice to for a brighter glow.

I decided not to go with the ultra-fancy software-adjustable blade color, telling myself that some day in the future, should I be happy with this one (and able to talk myself into spending the money) I’d get a Vader-style one too, with the adjustable color. But time will tell on that.

When I placed the order, the website told me it would be about 3-4 weeks for them to put it all together and get it shipped. Yet only 1 week later I received an email: it was already on its way! Cue additional excitement! Okay, so maybe a tiny, boring part of me felt a little silly about being excited by such a thing, but screw that part. It’s no fun.

As I write this, it’s nearly here. In fact, it would have been here today, but according to FedEx it caught delayed somewhere in Colorado due to a blizzard. (Darned ground shipping.) But it’s out there, and it’s coming. Soon.

I will, of course, post more when it arrives and let you know how it turned out.
I hate waiting!!! 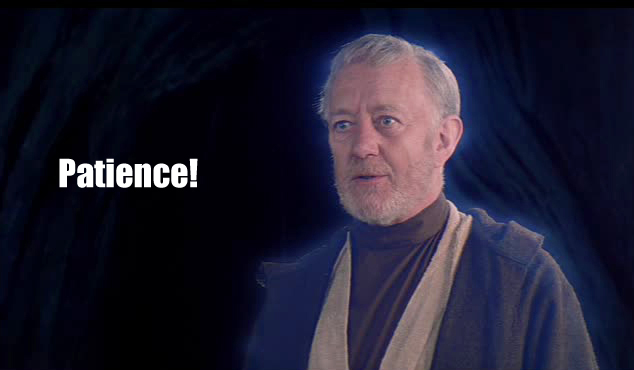 The wait is now over. Pictures and a video here!