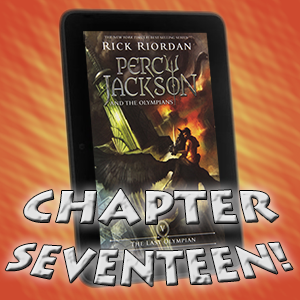 Holy Iliad! The parallels to Achilles in that tale are just bursting all over the place, aren’t they? (And I quite like it.) Silena’s theft of Clarisse’s armor in order to rally the troops and lead them into battle in her guise (clever Silena) is a clear parallel to Patroclus doing the same with Achilles’ armor. I’m ashamed to admit I hadn’t noticed that in the last chapter. Nonetheless, when she died (poor, clever Silena) and Clarisse went absolutely berserk with battle-rage, beat the holy crap out of the advancing army, and drove around dragging the drakon’s dead body behind her chariot, it became pretty clear, and pretty awesome. END_OF_DOCUMENT_TOKEN_TO_BE_REPLACED