It’s time for another in my admittedly intermittent series of geek-related Top 5 lists! Yes, I know it’s been a while. I’ve had this particular Top 5 topic in mind since I posted the previous list, but given the nature of the topic itself, it’s taken me longer than usual to get a handle on it. What’s that topic, you say? (Go ahead. Say it…) I’m glad you asked!

And here’s the usual disclaimer: I’m bad at ranking things in specific order, I’m indecisive, etc. Or am I simply…enigmatic? (Oooh! Way to be on-topic, me!) Naah, I’m just unable to commit. So, in no particular order…

What do you suppose Cthulhu dreams of? Smurfs? Unicorns? Going to school in nothing but his eldritch underwear?

“In his house at  R’lyeh dead Cthulhu waits dreaming.”

Ah, Cthulhu! That eldest of enigmatic beings, that tentacled horror sleeping in death who shall some day rise and wreak havoc upon us by virtue of his very existence. First introduced in Lovecraft’s 1928 story “The Call of Cthulhu,” jolly ol’ Cthulhu has captured the imaginations of an ever-increasing number of writers, especially now that he’s passed into public domain.

Much of Cthulhu’s enigma likely comes from his/its propensity to foster insanity in the mind of anyone who manages to learn anything about him/it. He/it is older than the stars, and would think as much about our demise as a truck driver thinks about the ants crushed between his wheels and the highway. What does Cthulhu think? None can know. And woe to us alle when the stars aligne ande he wakes.

I mean, ya know, unless we manage to ram his head with a yacht like in the original story… 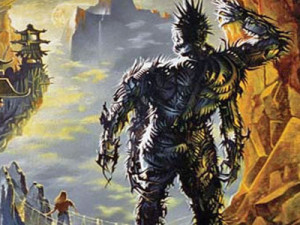 Any drawing of the Shrike pales in comparison to how the book makes you imagine it.

“Lord of Pain and the Angel of Final Atonement, comes from a place beyond time to announce the end of the human race…”

Described as a “thorn-and-steel Grendel” that “defied physical laws” and “communicated only through death,” the Shrike is the 4-armed, red-eyed monstrosity wrapped in blades that haunts the Time Tombs of the planet Hyperion in Dan Simmons’s novel of the same name. It kills in a blink, existing and then un-existing on either side of a moment filled with slicey, bloody death. The Shrike has eviscerated entire armies, exterminated colonies, and driven some who’ve seen it mad.

There are those who worship it. Pilgrims travel to the Time Tombs with the idea that the Shrike will grant a boon to the one who survives. Theories about its origins abound. Some say it was sent by God. Some say by the Devil. Some say mankind created it far in the future. But why? Why does it kill some, spare others, and carry still more off for reasons unknown? (They say there is a tree of thorns where its victims writhe, impaled in agony for the rest of time…)

And why does it only have two arms in the depictions on the covers of three out of four of the books in the series?

Tom Bombadil
(J.R.R. Tolkien’s The Lord of the Rings) 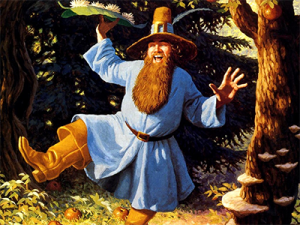 Unaffected by Sauron’s power and has control over life and nature. Doesn’t give a f***.

“He knew the dark under the stars when it was fearless—before the Dark Lord came from Outside.”

And now for something completely different. Unlike Cthulhu or The Shrike, Tom Bombadil is a guy from whom you probably wouldn’t need to run screaming. He’s jolly, he’s powerful, he’s a force for good…and no one is at all sure just where to classify him in terms of where he fits into Tolkien’s Middle-Earth.

Tolkien aficionados love to wrangle over this one. Sauron’s Ring has no power  over him, but nor does he care about such things. Gandalf suspects he’d lose track of the Ring if entrusted to protect it. He remembers the first raindrop, but apparently doesn’t fit into any of the different categories of the angelic beings Tolkien described in his world. Some think he represents God (though Tolkien apparently rejected this). Others have suggested he might be a Maia, like Gandalf or Saruman, who “went native.” Tolkien himself has said he didn’t know the answers to such questions, and that Tom is as much of a mystery to him as he is to the readers and inhabitants of Middle-Earth.

If you ask me (and this is my blog, so I’ll assume you did), I say Tom’s just a first-draft remnant from before The Lord of the Rings was The Lord of the Rings (i.e. when Tolkien was just writing a sequel to The Hobbit and didn’t realize it was going to transform into the world he’d created for his languages). Tolkien said Tom was based on a doll his children had, and he told them stories about it to amuse them, so all of these searches for deep meaning in the mystery of the precise nature of Tom Bombadil are nothing more than exercises in futility. But that’s just me. I’m kooky like that. Besides, no one ever said exercises in futility can’t still be fun.

I have a theory that his briefcase is actually filled with Red Vines. “Wake up, Mister Freeman. Wake up…and smell the licorice.”

He appears from darkness. He lurks in the distance, behind that window, or at the edges of your awareness–or perhaps just hangin’ out in a rowboat. The Half-Life series’s “G-Man” is easily one of the most mysterious characters in gaming, taking player-character Gordon Freeman out of one situation, bringing him into another, and watching along the way, all to safeguard the interest of his “employers”…

At least that’s what he says. Who knows if he’s telling the truth? The guy can seemingly stop time and move, untouched, through hostile environments. Every single line of dialogue he speaks comes out sounding somehow wrong, as if spoken out of alignment with our world’s dimensions… Am I waxing poetic, here? Perhaps. Per…haps.

Maybe he’s not as mysterious as I think. Maybe he’s just some weird Valve programmer’s prank that got out of hand. Maybe he’s another universe’s version of Dr. Walter Bishop from Fringe? (See picture caption.) He kind of looks and sounds the same, doesn’t he? Or maybe he’s got a copy of Half-Life 3 in that briefcase…

I wonder if Valve has even gotten around to figuring out who he is yet, or if they ever will. The G-Man might be one of those mysteries that can only disappoint us if solved. 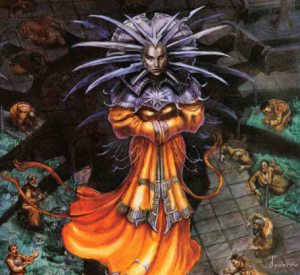 She and The Shrike would get along famously. Maybe they’d get married and have a family of cutlery.

“He was found dead on the blood-soaked steps of his own home, grievous stab wounds covering the whole of his body… but his eyes were open wide, and upon his lips was a triumphant smile.”

At the center of the Multiverse, suspended on a spire in the middle of the Outlands, lies Sigil, the City of Doors, where one can find a portal to any of the planes, if only one knows where to look (and where to find the key). It is a melting pot, its denizens ranging the full spectrum, from good to evil, sane to insane, powerful to insignificant, alive to…other. Ruling over this city, this world, this “cage” as some call it, is the entity known as The Lady of Pain.

No one knows where she came from, nor who or what she is. She may not even be a lady, or have any gender at all. The Lady communicates with none, save for the equally enigmatic servants known as dabus who reshape Sigil at her will. Whatever she is, she is powerful enough to keep the gods out of Sigil, yet to worship her is forbidden and results in horrible, stabby death (or worse) for those foolish enough to try.

She is said to sometimes appear on the streets of Sigil, intent on a purpose known only to whatever mind lurks behind her unchanging countenance. It is also said to be…exceedingly unwise to get in her way. 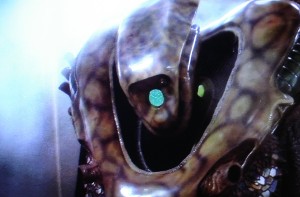 Kosh (and the entire Vorlon race, really) is only an honorable mention because we do actually wind up with a reasonably good sense of what he’s on about by the time Babylon 5 comes to a close. Nevertheless, when we first meet him/it, Kosh is a riddle wrapped in an enigma wrapped in an encounter suit. One word answers. Cryptic sayings. Heck, just about nobody who goes into Vorlon space ever comes back. Kosh even seems to enjoy cultivating that enigma. (“I really hate when you do that.” “Good.”) Oh, and did I mention that he glows inside that suit and seems to monumentally disturb any telepath who makes contact with him?

Kosh reminds me a lot of the Giant from Twin Peaks. In fact, both share the line, “You forgot something.”

Whenever Kosh says something that seems to make no sense, I like to imagine him raising a 32 oz. Big Gulp and taking a long, slow, noisy slurp to punctuate things. But then I’m strange that way.

So that’s my list. What’s your take? Did I miss anyone? Let me know in the comments! Don’t forget to check out the other Top 5 Lists if you missed them, and be sure to subscribe to the mailing list to stay informed and get a free copy of Mythed Connections!