Well huh. After the arduous task of coming up with a list of only five, I’m suddenly faced with the question of whether or not to rank them. More decisions! Just picking them was hard enough! So, in no particular order (unless I change my mind):

You know all those conspiracies on the Internet? Grey aliens. Area 51. FEMA. The Illuminati. Knights Templar. Manufactured plagues. Monsters in the sewers. The soda machine giving you lemon lime when you wanted orange. They’re all true!

Or, at least, that’s the case in Deus Ex, one of the best first-person action/rpg/sneak games (seriously, how the heck do we classify this one?) I’ve ever played. With a great many cyberpunk influences, the story alone is engrossing and ambitious. During my first playthrough I kept expecting (dreading, really) that it was about to end, but it kept going. Game environments are large and reward exploration with more resources, details about the world, or alternate ways of accomplishing objectives. Alligences and agendas change like winds in a storm. Decisions matter. On top of that, the gameplay itself is excellent. It’s not a simple shooter. Your ability to aim is based on your skill with certain weapons. Want to use that sniper rifle? The sight is going to wobble until you’re better at it. Ammo is limited and not just lying around everywhere. I know this irritated some players at the time, but for me, it was part of the charm.

The sequel, Invisible War, was a “streamlined” let down. Then, years later, we got Deus Ex: Human Revolution, a very good game that, while not without some flaws (the rushed ending, for one), is at least worthy of the name.

I’m going to cheat with this one a little. I couldn’t decide between the original X-Com: UFO Defense and XCOM: Enemy Unknown (the recent remake by Firaxis) so I’m going with both here. I first played the original while sharing an apartment with four other guys, at least three of whom also loved this game, so we fought over computer time a lot. (It was the 90s. Not everyone had their own laptop.) How to explain X-Com? You know that scene in Aliens where the marines first land and Lt. Gorman is in the APC watching them all on multiple screens and giving orders? He’s pretty much playing X-Com. Aliens are invading Earth and, of course, only you and the X-Com organization can stop them.

The game was not gentle. Your soldiers (which you could name, train, watch improve, and grow attached to) would die. A mission to storm an alien base with 75% casualties was considered a success, chrysallids were unholy terrors able to wipe out your squad single-handedly if you weren’t careful, and woe to the commander who didn’t get his soldiers off the Skyranger before the aliens pulled out the blaster launcher. But that’s what made it awesome. I expect I could write an entire series of blogs on this game.

The revival, lovingly done by fans of the original at Firaxis, carries on the XCOM legacy. Yes, it’s a little different, but the spirit is there, and it’s just as addictive.

When I’ve spent hundreds, maybe even thousands (yikes, really?) of hours playing a game, how can I not put it in the top five? Civilization 4 is frigging addictive. It’s not for everyone (shocking as it may seem, I’ve known people who just could not get into it), but the addition of the expansion packs makes for a game I can still pull out and blow multiple afternoons on. I still routinely play multiplayer games with a friend of mine.

And yeah, I’ve tried Civ 5. I like the hexes, but it feels less like a Civilization game than it does Risk with a few Civ-like elements. 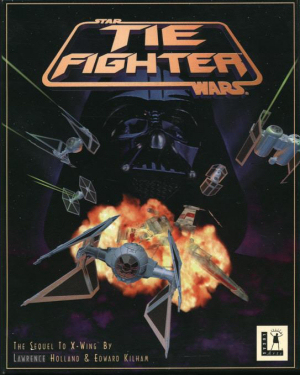 Remember back when there used to be space combat simulator games? Somebody want to tell me where the frell they’ve all gone? Is it because consoles don’t have joysticks? Is it because people just don’t think they’re worth playing anymore? Somebody, please, tell me why! I played a lot of them in my time, so I knew at least one of them would be on this list. I nearly went with Freespace 2, a beautiful game marred only by too many irritating nebula missions and not having a sequel. (Please, somebody, find the original Freespace gang and get their asses on Kickstarter or something! I need to know the rest of the story!)

But TIE Fighter has to stand out as the best for me. For one, it’s frigging Star Wars. Iconic Star Wars. (I’m sorry, but the prequel ships just don’t have the same gravitas.) I really wish Lucasarts hadn’t stopped making original saga-era spaceflight sims as they seem to have done. TIE Fighter was the sequel to X-Wing, a fantastic game in its own right, but TIE Fighter improved on the interface, graphics, and had an interesting storyline to accompany it. Plus you had to survive being a disposable pilot with all the durability of balsa wood and got to fly a few missions with Darth Vader breathing down your neck.

I agonized about this one. It was down to Torment or Baldur’s Gate 2, and even as I write this I’m still not sure. Both were excellent games based on Dungeons and Dragons 2nd edition(ish) systems. Both were large games with plenty of interesting characters and places to explore. Torment narrowly (narrowly!) won out due to the Planescape setting, which is deep, imaginative, and delightfully strange. Portals lead between various planes of existence where believe (or lack thereof) is enough to dictate the nature of existence; a city reshapes itself, some say of its own will, some say at the will of the enigmatic Lady of Pain; and somewhere in a forge toils a being of living steel seeking to forge a weapon that will unmake the multiverse.

You play The Nameless One, an immortal who’s forgotten more lives than you’ve ever dreamed of. Why is he immortal? Why is there a smart-ass floating skull following him around? What can change the nature of a man? While not as robust in its combat elements as Baldur’s Gate 2, Torment’s story is incredible, and perhaps was the first game which you could complete via philosophical debate. I should play this one again, if I ever can find the time. But Baldur’s Gate 2 is great, too…

I spent so much time NOT playing this game. It was touted (at least to me, if not by actual marketing—I don’t exactly recall) as the spiritual successor to Total Annihilation, a game with a large following that I never really got into. That, combined with the fact that the scope of the game put a heavy load on graphics processors (you can zoom from a single unit all the way out to the entire campaign map showing hundreds if not thousands of units) at a time when mine was outdated meant I avoided it for some time after release.

Then I got a new computer. And it was on sale. And I figured, what the heck. Addictive. Especially with multiplayer. Wow.

This whole series gets an honorable mention because the original (known at the time as Hero’s Quest before the series had to change its name for legal reasons) was one of the first PC games I ever got into. With a mix of humor, adventure, humor, fantasy from all over the world, and humor, it’s a fantastic series. Okay, so Quest for Glory 3 wasn’t all that great, but on the whole, it’s all worth it. I still whistle the theme sometimes. Then I get a little sad because so few people would likely recognize it. I think the whole series is on GoG.com. Give it a shot!

So what do you all think? Did I miss anything? Pick the wrong ones? Comment and let me know, and watch for another Top 5 list coming next week!