So I’ve finally got a little bit of breathing room in working with my Booktrope team toward getting Zeus is Dead: A Monstrously Inconvenient Adventure ready for publication. That means it’s time for another geek-related Top 5. This time…

Note that this is for supporting characters. So there will be no Samus, no JC Denton, no Commander Shepard (just her favorite supporting character on the Citadel). This will be rather biased on the side of computer games as well, because my time as a console gamer is far more limited. I’ve been playing PC games since 1990, but my console experience is only limited to the original NES and the PS3 which I only got a few months ago.

And, as always, the list is in no particular order due to my complete inability to rank favorites. 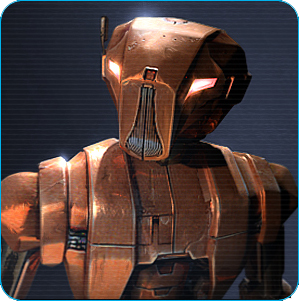 “Observation: I am a droid, master, with programming. Even if I did not enjoy killing, I would have no choice. Thankfully, I enjoy it very much.”
If you thought I’d even think of making this list without including everyone’s favorite assassin droid, you really don’t know me very well at all. HK-47, an assassin droid masquerading as a protocol droid, was arguably the most important contribution that Knights of the Old Republic made to the Star Wars universe. I say this with no disrespect to anything else in KOTOR, understand. I love that series and am still deeply bitter we have yet to get a KOTOR3. (Don’t bring up the Old Republic MMO. Just…just don’t.)
I’d love it if they manage a way to work an ancient-but-restored HK-47 into the new Star Wars movies, provided that his dry sense of humor and detached, bloodthirsty love of his primary function remains intact.

“Don’t be so PUSHY! I looks when I’s good and ready! …Okay, I’s ready!”
I’m aware that a small minority of players just hate this little guy, but he’s one of my favorite parts of Throne of Bhaal, the expansion/conclusion to the epic fantasy RPG that is Baldur’s Gate 2. He doesn’t join your party, he doesn’t fight you, he doesn’t really do much of anything but hang around cleaning your inherited pocket-plane (and if that doesn’t make sense to you, play the game), collecting “shiny ones,” and upgrading your magic items when you find a particular combination.
He’s also got quite a mouth on him, and very little filter. That, combined with his high-pitched, playful delivery makes him a lot more charming than you might think. I mean, sure, he’s EVIL, but he does his job well, and we need to learn to not discriminate on the basis of such trivialities, right?
I should mention that if I ever get a new Roomba, I’m naming it Cespenar. (The current one is named Zathras, but it’s getting old…)
MORDIN SOLUS
(Mass Effect series) 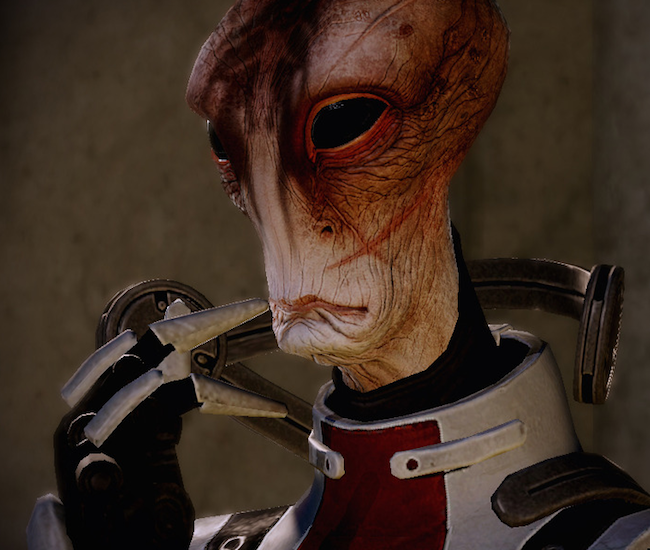 “Had to be me. Someone else might have gotten it wrong.”
You may have noticed a trend in this list so far. All of the characters I’m listing are good at making me laugh. Mordin is no different in that regard. Yet beyond his rapid Salarian delivery and the humor that comes from his scientific obsession (“Might go somewhere sunny. Sit on beach, look at ocean, collect seashells. …Might run tests on the seashells.”), he’s surprisingly deep. His history as the scientist responsible for the Genophage, which saved the galaxy from the Krogan via permanent damage to their reproductive abilities, is a primary source of internal conflict and motivation. Without giving any spoilers, Mordin’s part in Mass Effect 3 is easily one of the most poignant scenes in any game I’ve ever played.

“Oh SURE! I know a LOT about lifting curses! That’s why I’m a disembodied talking skull, hanging on a spike, in the middle of a SWAMP!”

Murray, a diabolically EVIL talking skull from the Monkey Island series of adventure games, has delusions of power are inversely proportional to his size. I think he secretly knows his lack of legs, or arms, or pretty much anything at all are a major obstacle for his plans of world domination, but you’ve got to hand it to him, he doesn’t any of that get him down.
He’s also surprisingly mobile for a guy with no legs. Murray turns up in numerous locations in Curse of Monkey Island (his debut game), and has at least one appearance in each of the following games. (Okay, so I’m counting the 5-part Tales of Monkey Island as one game.) He’s alternately evil and vulnerable, yet he’s always hilarious. I cheered when he showed up in Tales of Monkey Island. All games need more Murray.
GLaDOS
(Portal series)

“There was even going to be a party for you. A big party that all your friends were invited to. I invited your best friend, the Companion Cube. Of course, he couldn’t come because you murdered him. All your other friends couldn’t come, either, because you don’t have any other friends because of how unlikable you are. It says so right here in your personnel file: ‘Unlikable. Liked by no one. A bitter, unlikable loner, whose passing shall not be mourned. Shall NOT be mourned.’ That’s exactly what it says. Very formal. Very official. It also says you were adopted, so that’s funny, too.”
Okay, let’s be honest: What’s more funny than a psychopathic computer with damaged morality cores who’s killed legions of testing personnel by flooding the Enrichment Center with a deadly neuro-toxin? Portal was a great puzzle game, but GLaDOS is what it such a phenomenon, even before “she” sang “Still Alive.”
She’s cold, she’s cruel, she’s self-serving… And unlike the HAL-9000 from 2001, lying doesn’t make her go berserk. I mean, yeah, she was already berserk, which likely helps with the lying, but it’s not a result of the– Okay, so I’m kind of losing my train of thought here. Anyhoo, GLaDOS: great character. And remember, the Aperture Science Bring Your Daughter to Work Day is the perfect time to have her tested.
Honorable Mention
(Because five wasn’t enough, but six is, today.)
MINSC & BOO
(Baldur’s Gate series)

“Go for the eyes Boo, GO FOR THE EYES!! RrraaaAAGHGHH!!!“
Tattooed, fearless, and gleefully out to put his boot far up evil’s collective backside, it’s just not a Baldur’s Gate party without Minsc. Oh, sure, you can leave him waiting for you on the streets of Amn or something, and he’ll wait and wait and wait, talking to his pet miniature giant space hamster Boo to while the time away, but from there on out everything will feel so drab, so empty, so…Minsc-less.
Minsc is exuberant, compassionate, and one of the funniest folk in the game. He doesn’t really crack jokes; the humor comes from his personality in general. Okay, yeah, so he’s got intelligence and wisdom scores that are so far in the toilet you can bet he’ll be the first one to be charmed, mind-controlled, or a drooling mind-flayer victim, but you can’t have everything. Butt-kicking…for goodness!!
So what do you think? Who did I get right or wrong? Who did I miss? And is Boo REALLY a “giant miniature space hamster,” or just a regular ol’ fire-breathing phase doppelganger space hamster keeping a low profile?