And we’re back with another geek-related Top 5 list! (Who is this “we”? I’ve no idea! I suspect I’ve somehow split into two or three people in order to deal with all the things I have to do lately. On the other hand, maybe I’ve just turned pompous and I’m using the royal “we”? Or I’ve been assimilated by the Borg.) This time I’m going with the top five villains in fiction, as judged by me. In totally subjective fashion. In relation to my mood at tastes right at this moment on April 26th, 2014, because I am flighty and I apparently lack conviction. Oh! I nearly forgot to toss up the title in fancy title-fashion. So here it is:

Good. Got that out of the way. As always, this list is in no particular order due to my usual inability to rank favorites. (Well, okay, so the first one in the list is likely the one that occurred to me first, but…) “I long ago learned the advantages of patience.”

Yeah, if you’re a regular visitor to this blog (especially my Farscape rewatches), you probably saw this one coming. The best villains are ruthless, competent, and completely committed to an agenda that they truly believe is the best course of action. Okay, so that’s probably an incomplete definition designed to fit Scorpius to a T, but I don’t care. From the moment he steps onto the screen looking like something out of an alien gimp nightmare in the late-season one episode Nerve, Scorpius is interesting, dangerous, and a major influence in the course of the series. And, really, he never stops being so.

A huge part of what makes Scorpius a great villain is how Farscape doesn’t keep his role static. He’s not just some bad guy out to get Crichton every week. (“Oh, gee, Scorpius! How do we outwit him this time!”) Such a treatment would, over time, blunt his edge and devalue his effect over time. (I’m looking at you, Voyager Borg…) His situation changes. Sometimes he’s in a position of power, sometimes he’s not. (Sometimes he’s locked in a cell on Moya. Sometimes he’s shot and buried.) But he always bounces back, and he’s never, ever trusted. …Except by Brakka.

One of the things I like most about Scorpius is his agenda. He’s not evil for the sake of evil. It’s just, well, some stuff has to get done, and if he has to get his hands dirty to do it, well, those are the breaks. The only alternative, so far as he’s concerned, is Scarren invasion, which–to him–is far, far worse. (And, darn it, if we don’t just empathize a little with him on this.) To paraphrase something executive producer David Kemper once said, Scorpius is a businessman. 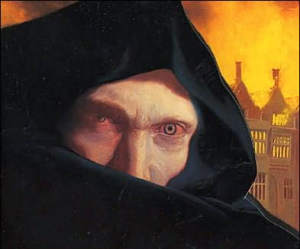 The implied complicity of his smile was unnerving, as if he could gaze unimpeded into the private mind of anyone he scrutinized.

The villain of Mark Frost’s supernatural Victorian adventure-thriller about how Arthur Conan Doyle met the man who (at least in the book) inspired Sherlock Holmes, Alexander Sparks is like a younger Professor Moriarty–but with an extra few cupfuls of depravity. The chapters that explore Sparks’s childhood and adolescence are truly chilling (from manipulation of other children to the events leading up to the gruesome and fiery murder of his parents). His efforts as an adult, which drive the book, are far more sinister.

Alexander Sparks is a character the reader learns about via his actions and other characters’ reactions to him long before he is seen in person on the page. When he is on the page, it’s like being trapped in a box with a poisonous snake. This is a character you’re so very much hoping will die, not only for his past deeds, but for the effect he has on protagonists you’ve come to care about. 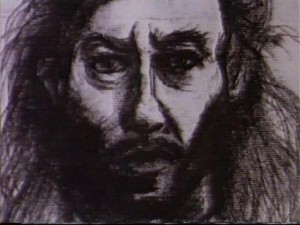 Have you seen this man?

“He is BOB, eager for fun. He wears a smile. Everybody run.”

BOB (a.k.a. Killer BOB) from Twin Peaks likely gets the prize for creepiest-looking villain on this list. With his gleefully malevolent grin, insane eyes, and feral howling and laughter, this is a villain who admittedly has given me a nightmare or two. I dare you to watch certain episodes of Twin Peaks and then go looking in mirrors and NOT worry that he might be staring back at you.

The fact that he’s an inhabiting spirit who feeds on fear and has all of the cuddliness of a homicidal child molester probably helps, too. BOB can walk into a room and crawl at the camera over a couch and it’s one of the most disturbing things you’ve ever seen on broadcast TV. Oh, and he killed Laura Palmer. Kinda.

Fun-fact: I used to do a great BOB-climbing-over-the-couch impression in college.

Okay, so admittedly it’s been a LONG time since I read Timothy Zahn’s Heir to the Empire trilogy – some of the first books in the now gigantic Star Wars “Extended Universe” – but I do remember that Grand Admiral Thrawn made an impression. If that’s not the mark of an enduring villain, then I don’t know what is. In a sense, this guy’s sort of like a clean-cut Scorpius. Intelligent, ruthless, and thinking at least 10 moves ahead. He’s smart enough to correctly anticipate an opponent’s thinking and outwit them. (Well, okay, most of the time. Too bad you didn’t see that one thing coming, Admiral. But it was so artistically done…)

From what I’ve seen, Thrawn is a major favorite character among the Star Wars fan community. He invariably comes up whenever someone mentions a villain on a forum. I think part of his allure is that he’s got zero Force powers. He manages everything that he does, holding together the remnants of Palpatine’s shattered Galactic Empire based entirely on intelligence, strategy, and charisma. Plus he’s blue with glowing eyes, which is kinda neat. I know there are a great many out there who will be disappointed if he doesn’t appear in the upcoming Star Wars movies.

“There is a realm of existence so far beyond your own you cannot even imagine it. I am beyond your comprehension. I am Sovereign.”

Sovereign, the (spoilers!) mind-altering spacecraft that turns out to be a sentient Reaper bent on eradicating all spacefaring biological life in the galaxy, is on this list primarily for how much I enjoyed Sovereign’s reveal during the first Mass Effect game. A being of Lovecraftian scope, Sovereign wanted to wipe us all out and couldn’t care less how we felt about it. The Reapers were old, far older than we could even conceive. They were inexorable. Unknowable. Their motives were beyond our grasp, and we were powerless to stop them.

I’m not really sure the Mass Effect series could ever really have kept that feeling going while at the same time managing to let the player STOP the Reapers. But that–and the controversy over Mass Effect 3’s ending–is another topic.

Honorable Mentions
(Because, as you should know by now, five isn’t ever enough.)

Okay, the goa’uld Apophis is not perhaps the smartest villain ever. Nor is he, like most goa’uld, unhindered by his own arrogance. He’s thwarted often. But the thing is, he keeps coming back! For five frelling seasons! (Okay, so the fact that many goa’uld own sarcophagi that can bring people back from death probably helps.) One has to at least admire his resilience. Even after they surrounded him in Replicators on a ship that smashed into a planet in another galaxy, I still wasn’t sure we’d seen the last of him.

Does this one really need to be explained? Okay, so he’s not what you’d call a villainous mastermind so much as he is just a sadistic little spoiled bastard with the keys to the kingdom. He’s got all the wisdom of a drunken turkey with syphilis and he’s about as good in a fight as Pee Wee Herman. If it weren’t for the power he wields, no one would give him a second look. But WITH that power? The guy’s one of the most entertaining characters to hate in the history of television. And that’s got to be worth something.

So what do you think? Did I miss anyone? Include someone I shouldn’t have? Have an idea for a future Top 5? Comment and let me know! And be sure to check out the other Top 5s if you missed them…