Here on the eve of the release of The Force Awakens, I just can’t resist diving back into the Star Wars well one more time for this latest geek-related Top 5 List. Talking about Star Wars also takes the edge off of having to wait until I can see TFA myself and come out from this self-imposed spoiler bubble I’ve put myself into. (As I write this, it’s 7pm on Tuesday. I’ve already dialed down my social media viewing to avoid hearing anything from those who were at the Hollywood premiere on Monday, and I may very well avoid social media altogether at midnight when the press embargo for the movie ends and official reviews start popping.)

So, while I’m itching to view it all for the first time, let’s take a quick look back with…

It’s a challenge to pick just five. Not every great moment–be it emotional, visually spectacular, funny, or just all-around excellent–can fit onto a top five list, even with my usual cheat of honorable mentions. The destruction of the Super Star Destroyer Executor? The flight through the innards of the second Death Star? Luke in the cave on Dagobah? They didn’t make the list, despite leaping to my mind immediately. Other moments you may have listed? Possibly not on here either. But tell me if I missed your favorite.

“If you strike me down…” 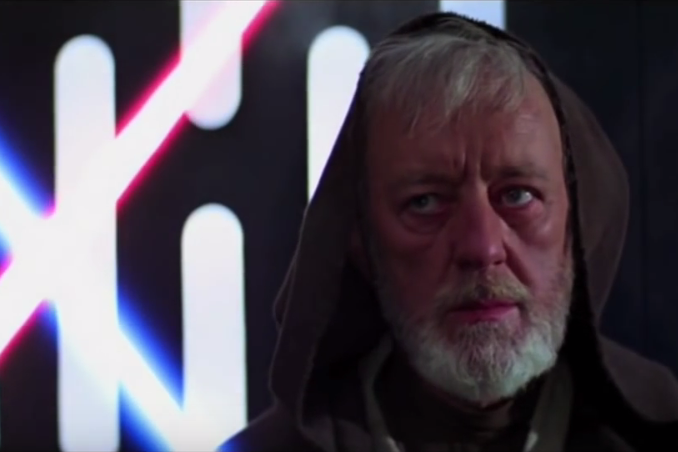 I included this one for the way it boggled my young mind when I first saw it. (It was 1981 when I first saw Star Wars, and I was 7 years old.) Obi-Wan Kenobi had babbled some nonsense to Vader about how he’d be more powerful if Vader struck him down. And of course this was clearly a bluff, right? If he’s struck down, he’s dead, and that can’t possibly be more powerful, after all. (My parents had been very clear on this whole “you don’t come back from death” thing.) He was just trying to intimidate Vader and–HOLY MOLY WHAT HE HECK JUST HAPPENED WHY DID HE JUST LET HIMSELF GET KILLED WHERE DID HE GO WHERE’S HIS BODY OHMYGOD!

It might’ve made something of an impression on me, and confused the heck out of me, honestly. Even after the movie was over, I wasn’t quite sure what it meant. 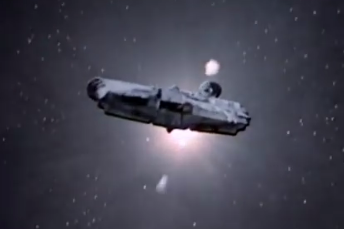 It’s character growth, an awesome last-minute rescue, and a properly executed “YAHOO!” all wrapped into one moment. (Plus I still get a kick out of seeing that other TIE pilot panic.) Plus, again, how awesome was this to see for the first time? Practically the entire Rebel attack has failed. Nearly everyone else is dead. Biggs is gone (okay, so we didn’t really know just who the heck he was at all, but Luke seemed to have some sort of connection with him), R2-D2’s head’s nearly blown off, the Death Star’s about to blow Yavin 4 to smithereens, and John Williams, bless him, just keeps piling on the orchestral drama. It’s nearly almost over, and here comes the Millennium Falcon diving in out of the sun to pull Luke’s bacon out of the fire so he can take the shot.

Given that Han’s flying the ship, that means Chewie likely made the shot itself. And yet they still don’t give him a medal later. …Wait, were they punishing him because he didn’t aim at Vader’s fighter instead? 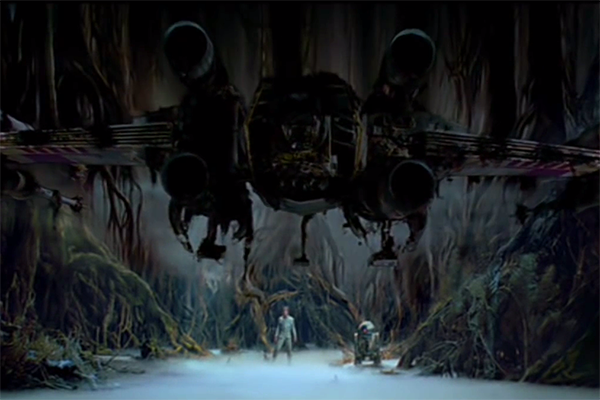 If it weren’t for one other moment later in The Empire Strikes Back, I think this would be the definitive moment of the movie. First, you’ve got the payoff for so much of what Yoda says: The Force is powerful, it doesn’t rely on size, and amazing things can be done with mental discipline and positive belief. The visuals themselves are incredible, skillfully framed and presented, with Luke’s awe resonating with our own. Who knew Yoda was that powerful? (I mean, unless you watched the prequels first, in which case, WHO THE HELL LET YOU DO THAT?!) And of course John Williams’s score brings it all together.

Plus who doesn’t enjoy Yoda’s capper of “That is why you fail.”? (That’s also evidence that Yoda doesn’t always talk backwards, which I wish Lucas would’ve remembered a little more for the prequels, but that’s another topic altogether.) 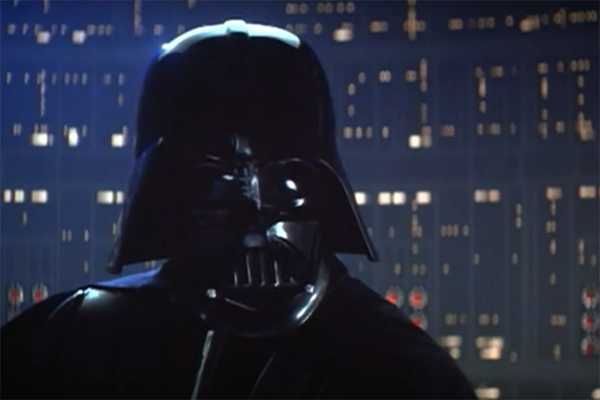 If you didn’t think I was putting THE revelatory moment in this list, then I don’t even know what you’re doing reading this blog. Han’s frozen and his rescue failed. Luke’s just lost a hand to the most menacing figure we’ve seen in the series up to this point, he’s hanging out over a bottomless pit, and worst of all, he’s lost that cool lightsaber! His FATHER gave him that! That was the only thing he had of the man and that asshole Vader just took it away and—WHAAAAAAAAAAT?!

I’d like to point out, for those of you who came into the Star Wars saga after Return of the Jedi‘s release, that some of us had to wait THREE YEARS to find out if Vader was telling the truth or not. (Okay, so I only had to wait one year or so, since I didn’t see ESB until it’s second or third run in the theaters.) I still remember having heated arguments in the lunch room of Machias Elementary over the validity of Vader’s claim. For the record, I was fervently in the “Vader lied” camp.  I mean, come on, he had to be lying! The guy blows up planets and chokes people!

I’m including this one because this is the development that blew my little eight year old mind. I’d known about Jabba the Hutt going into the movie, by which I mean I heard there was this big ugly “thing” called Jabba that we’d be seeing. I didn’t know quite what he looked like (they didn’t show him in the trailers or the toy ads before the release—at least not that I’d seen), but I knew he was bad, and powerful. And then Leia got captured, chained up, and forced into certain wardrobe choices. So surely Luke would rescue her somehow and kill Jabba, right? I mean, he’s the hero! He’s the guy! He blew up the Death Star! Leia’s just this girl, right?

And then she smashed the lights, threw the chain around the blobby slug-frog’s neck, and choked the bejeezus out of him. He’s dead. Jabba’s dead. Leia killed him? Girls can DO that? It was a dynamic that I’d never really encountered before at that age. Leia killed Jabba! Wow! My mind wrestled with this (I mean, amid all of the other cool stuff happening on screen), and finally came to the realization that yep, I guess girls can do that stuff, too. It just happened, right there in front of me. After all, why couldn’t they?

And, looking back, that’s a pretty important moment for a child to have, regardless of gender.

Honorable Mentions
(Because I cheat on that whole “5” thing.)

I didn’t intentionally omit the prequels when I was picking candidates for this list. I just couldn’t bear leaving out any of the above moments to fit a prequel moment in. I wanted to have at least one moment from the prequels in here, however, because they do indeed have some good ones. I decided to go with perhaps one of the cruelest ones, which really is just a moment. The way the lightsaber ignites, the way the boy flinches, and the implication of the scene ending immediately after all combine to give the viewer a cozy little stab through the heart.

This one I’m including almost entirely for visual reasons. I’ve always loved the way the red of the Emperor’s Guard stands out among the white, black, and gray of the assembled Stormtroopers in the Death Star’s landing bay. The contrast makes them all the more impressive, and adds an excellent touch for the Emperor’s final arrival. And yet we never get to see them in action.

And then, finally, there’s the introduction which needs no introduction, so I’ll just leave it right here…

So what are your favorite moments? What did I miss? What about the prequels? Tell me below! 😀