No, I don’t mean that as a metaphor for having watched the whole series, the show’s formative influence on me, or having learned to make a damn fine cherry pie. I mean I graduated from the high school used to portray Twin Peaks High School in Fire Walk With Me. Michael G. Munz, Snohomish High School Class of ’92. How’re ya doin’ down there?

Curiously, Bobby is walking into the library here, which seems a little out of character for him… 😀

They filmed it when I was still a student there, but at the time, I wasn’t familiar with the show. Sure, I’d heard of it. Who hadn’t? Even in those pre-Internet days, it was somehow a part of our cultural consciousness. Yet for whatever reason, I never watched it while it was still on the air. (Exception: The season 1 finale aired on a night that I and a bunch of other friends were sleeping over at my friend Scott’s house. For just a moment as we were flipping channels, it came on. Though my recollection is vague, I think it went something like this: Audrey was at One Eyed Jack’s, getting dressed up to meet “the owner.” Being teenage guys, of course scenes in a brothel made us pause. “What’s this show?” “I don’t know.” “Wait, is it that Twin Peaks thing? I hear this show’s weird as hell.” Cue the scene switching to Nadine, sitting on the floor in a peach dress and ubiquitous eye patch, pouring out a bowl full of pills to attempt suicide, and then Cooper playing blackjack. “Yeah, this is weird.” “Hey, Scott, doesn’t your dad have a pool table?”) No, my first full encounter with the show came my freshman year in college. TP had been off the air for about 18 months. Fire Walk With Me had come out only about six months prior. My friend Nick, whom I’d only met that year, was a TP fanatic. He had all of the episodes on tape, recorded from the broadcasts, and he wanted to know if I’d like to watch them.

Actually, no, that’s inaccurate. He desperately wanted me to watch them, to show them to me so that he could both share the wonder of a unique, beloved series and vicariously relive the experience of seeing it for the first time.

This approximates the look Nick may have had in his eye when he wanted me to watch.

Me: “Twin Peaks? Wasn’t that the weird show that was really popular and got cancelled?”
Nick: “Yep! I was so pissed. But you really have to see it!”
Me: “That was the whole ‘Who killed Laura Palmer?’ thing, wasn’t it?”
Nick: “Yeah, but–”
Me: “Did they ever actually solve that? I heard that damn question all the freaking time when it was on the air, and I got sick of hearing it.” (I was kind of a close-minded idiot.)
Nick: “It got solved. But the show wasn’t really about that, it was about all the weird shit that goes on in the town. The murder was just part of it. You have to watch! Just try a few episodes, I promise you’ll love it.”
Me: “Who killed her?”
Nick: “You’ll just have to watch and–”
Me: “Nope! I want to know now. You tell me who did it, and then I’ll watch.”
Nick: “Dude, that’s really not–”
Me: “You said it wasn’t really about the murder, right? So it should be okay to tell me.”
Nick: “…”

I really wish I could reach back in time and whack myself in the back of the head for that one. “Don’t make him tell you, Past-Michael! You’ll regret it! You won’t ever get to experience finding out through the story!” But I’m not allowed to do time travel anymore since the, um, incident, so Past Michael did manage to badger Nick into telling. He didn’t give me all the details, but I did get the who (both “whos,” if you take my meaning). It was enough to get me to sit down in the dorm lounge of Haggett Hall 1/2 North with a few other watches and take my first step on a journey to a place both wonderful and strange.

I was easily hooked. Along with an ever-growing group of watchers, I saw the entire series and the movie. Not long after, I managed to buy the official DVD box set (plus the separately sold pilot episode) and started inducting others. Now it was my turn to watch vicariously. I’ve always loved watching people experience a story, be it one I’ve written or just one that once hooked me. Twin Peaks proved an excellent medium for that. (Plus I could watch them find out who killed Laura, and imagine I once had been able to experience it that way myself. Darn you, Past Michael!!)

No shoes on the furniture, BOB!

Now, with the 3rd season/revival coming in less than two months(!!), I’ve decided to watch it again, and share my thoughts, memories, praise, and snarky comments here on the blog for each episode. Look for that coming very, very soon… 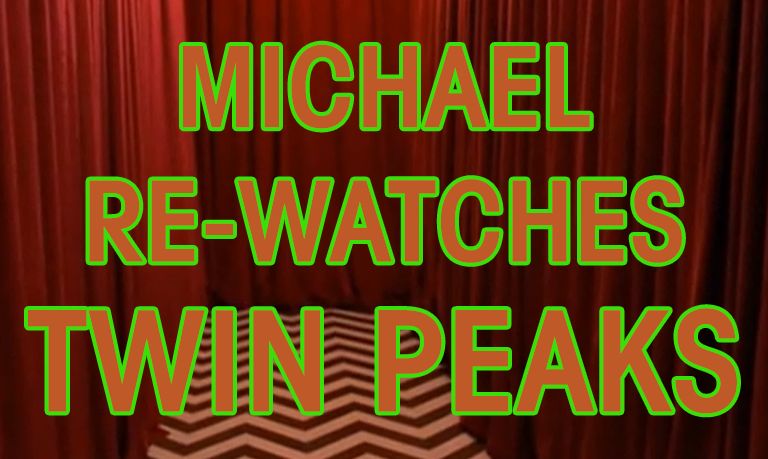 Incidentally, the room in the school in Fire Walk With Me where James and Laura have sex? That was officially known as the “Multi-purpose Room.”

So that’s a thing you know now.

Start with the Pilot!
View all of my Twin Peaks re-watch blogs here!